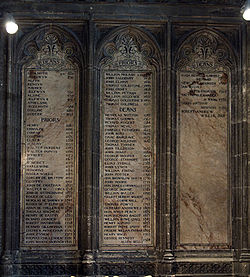 Inscribed panels in Canterbury Cathedral, listing the Deans of Canterbury

The Dean of Canterbury is the head of the Chapter of the Cathedral of Christ Church, Canterbury, England. The office of dean originated after the English Reformation, and its precursor office was the prior of the cathedral-monastery.[1] The 39th and current Dean is Robert Willis, who was appointed in 2001.

Version on show in the Cathedral (west end)

About a century after becoming a monastic foundation late in the 10th century, the Cathedral started to be headed by a prior rather than a dean. It would next have a dean after the Dissolution of the Monasteries.