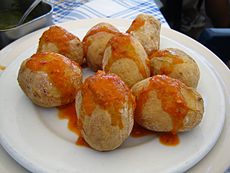 Mojo (Spanish pronunciation: [ˈmoxo]) (from the Portuguese Molho (sauce) ) is the name, or abbreviated name, of several types of sauces, varying in spiciness, that originated in the Canary Islands. It is predominantly either a red (most common), green or orange sauce.

The basic recipe consists of olive oil, large amounts of garlic, paprika, and cumin. Flavorings such as vinegar, lemon, orange or lime juice may be added. The most typical use of this hot sauce seems to be papas arrugadas con salsa mojo, or potatoes with mojo. Mojo is also commonly served with fresh bread rolls at the beginning of a meal. Similar sauces, also known as mojo, are also popular in Cuba and throughout the islands of the Caribbean, Hispanic or non-Hispanic, due to heavy Canarian emigration to the Caribbean, and have even influenced some barbecue sauces in the Deep South region of the United States, particularly the states of Florida, Texas, and Louisiana. The flavor can be made of almost everything, from tomato or pepper to avocado.

In Cuban cooking mojo applies to any sauce that is made with garlic, olive oil and a citrus juice, traditionally sour orange juice. It is commonly used to flavor the cassava tuber and is also used to marinate roast pork.[1]

In Puerto Rico mojo is a herb sauce of finely chopped cilantro or parsley with salt, lots of crushed garlic and olive oil. But black pepper, onions and vinegar and lemon can also be added. It is commonly used on the island as a dip for tostones, cassave and sometimes mashed with mofongo.