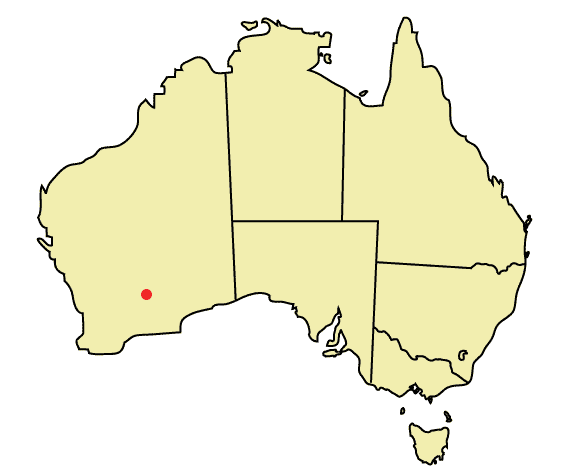 Kalgoorlie-Boulder is a town located convert|595|km|mi|0 east-northeast of Perth located in the .The town was founded in 1893 during the Yilgarn-Goldfields gold rush, and is located close to the so-called "Golden Mile".

With its twin town Boulder, it has a population of 28,246, making it the largest urban centre in the region and the fifth-largest in Western Australia.

The name Kalgoorlie is derived from the word "Karlkurla", meaning "place of the silky pears".

In June 1893, prospectors Patrick (Paddy) Hannan, Tom Flanagan, and were travelling to Mt Youle when one of their horses cast a shoe. During the resultant halt in their journey, the men noticed signs of gold in the area, and decided to stay put. On 17 June 1893, Hannan filed a Reward Claim, leading to hundreds of men swarming to the area in search of gold and Kalgoorlie, originally called Hannan's, was born. [Raymond Radclyffe, "Wealth and Wildcats", Carlisle, Western Australia: Hesperian (1898, reprinted 2004), p.15.] The of , along with other metals such as , has been a major industry in Kalgoorlie ever since, and today employs about one-quarter of Kalgoorlie's workforce and generates a significant proportion of its income. The concentrated area of large gold mines surrounding the original Hannan find is often referred to as the Golden Mile, and is considered by some to be the richest square mile of earth on the planet. The town's population was about 30,000 people in 1903 and began to grow into nearby Boulder.

The narrow gauge Government railway line reached Kalgoorlie in 1896, and the main named railway service from Perth was the overnight sleeper train which ran until the 1970s. In 1917, a railway line was completed, connecting Kalgoorlie to the city of Port Augusta, across convert|2000|km|mi|0 of desert, and consequently the rest of the eastern states. The standardisation of the railway connecting Perth (which changed route from the narrow gauge route) in 1968 completed the , making it possible for rail travel from Perth to Sydney—and the rail service commenced soon after. The Goldfields area boomed as a whole, with an area population exceeding 200,000, mainly prospectors. The area gained a notorious reputation for being a "wild west" with bandits and prostitutes. This rapid increase in population led to a proposed new state of but with the sudden diaspora after the Gold Rush led to plans falling through.

Places, famous or infamous, that Kalgoorlie is noted for include its water pipeline, designed by , which brings in fresh water from Mundaring Weir near Perth; its Hay Street s (the street itself was apparently named after Hay Street, Perth); its school; the goldfields railway loopline; the Kalgoorlie Town Hall; the Paddy Hannan statue/drinking fountain; the Super Pit; and Mt Charlotte lookout. Its main street is Hannan Street, named after the town's founder. One of the infamous brothels also serves as a museum and is a major national attraction.

Kalgoorlie and the surrounding district was serviced by an extensive collection of suburban railways and tramways, providing for both passenger and freight traffic ["Railways and Tramways of Kalgoorlie" Singleton, C.C. Australian Railway Historical Society Bulletin, Marcvh/April 1954 pp33-36/40-44] .

The Super Pit is an open-cut gold mine approximately convert|3.6|km|mi|1 long, convert|1.6|km|mi|1 wide and convert|512|m|ft|0 deep. [cite web|url=http://www1.superpit.com.au/pages/faqs.asp|author=Kalgoorlie Consolidated Gold Mines|title= The Super Pit - Frequently Asked Questions|year=2007|accessdate=2008-04-02] It was created by Alan Bond, who bought up a number of old mine leases in order to get the land area needed for the Super Pit. Every now and again the digging reveals an old shaft containing abandoned equipment and vehicles from the earlier mines.

The mine operates 24 hours a day, 7 days a week, and a visitor centre overlooks it. The mine blasts at 1:00 pm every day, unless the prevailing winds would carry dust over the town. Each of the massive trucks carries 225 tonnes of rock and the round trip takes about 35 minutes, most of that time being the slow uphill haul. Employees must live in Kalgoorlie; it is not a operation. The mine is expected to be productive until about 2017. At that point, it is planned to abandon it and allow the to seep in and fill it. It is estimated it will take about 50 years to fill completely.

There are 25 historical hotels and pubs in Kalgoorlie which are still operating today;

The Kalgoorlie-Boulder metropolitan area consists of a number of suburbs:

* BoulderKnown as the home of the Super Pit, it is one of Kalgoorlie-Boulder's historical suburbs featuring many buildings and landmarks dating as far back as 1880. It was once the central business district for the Town of Boulder, but since amalgamation with Kalgoorlie, it is now more of a historical local centre. Boulder has its own post office, town hall and many hotels along its main thoroughfare, Burt Street.
* Broadwood (aka - Hampton Heights)A new housing suburb located next to the which was recently expanded and is enjoying healthy growth.
* FairwaysA recent housing suburb built on old golf course land. Fairways also features a primary school, church, caravan park and small business. A popular choice for young families.
* Golden Grove (formerly Adeline)Adeline was originally constructed around 1970 by the State Housing Commission. The suburb was built on the "Radburn" concept, with houses facing away from the street and common pathways linking homes. In 2003, a significant urban renewal project, including the renaming of the suburb to "Golden Grove" and re-aligning of homes was commenced. [cite news|publisher="Department of Housing and Works"|title=Launch of the new Golden Grove project, Kalgoorlie |url=http://www.dhw.wa.gov.au/news/news_mr_auto.cfm?item=337 |accessdate=2008-02-17|date=]
* Hampton HeightsSee Broadwood.
* HannansLocated in Kalgoorlie's far north. It was once the city's richest part of town, and the first suburb to have its own independent shopping centre (Hannans Boulevarde). A school and an 18 hole golf course are featured as well.
* Central KalgoorlieThe central business district. Hannan Street, named after Paddy Hannan, is the city's most major street and stretches from the western side of the suburb (mainly housing and some light industrial) to the eastern side (national retail chains, banks, law enforcement, restaurants, hotels, nightclubs and tourist attractions).
* Karlkurla GroveThe name of the eastern extension to Hannans. Proving popular due to adjacent nature reserve (Karlkurla Park) and good location.
* LamingtonOne of Kalgoorlie's oldest and largest housing suburbs. Much like other older suburbs, almost every street is parallel with Hannan Street in Central Kalgoorlie. It houses North Kalgoorlie primary and pre primary schools, many small businesses and medical practices, a hotel and a tavern and an 18 hole golf course.
* MullingarMuch smaller today than it originally was before the Super Pit expansion. It's located at the far east end of Lamington between the northern Goldfields railway and Goldfields Highway.
* O'ConnorThe south-east section of high-class housing suburb Somerville. O'Connor is home to its own primary and Catholic high schools and shopping facilities, and it also houses the city's only recreation centre.
* PiccadillyA narrow suburb following Piccadilly street between Central Kalgoorlie and Lamington. Features the city's regional hospital, some small business, a hotel, a sporting arena and two grassed ovals.
* SomervilleReputed as Kalgoorlie-Boulder's richest suburb, with unique design and high-class housing and parks. It's located between West Kalgoorlie, Central Kalgoorlie and O'Connor.
* South KalgoorlieStretching from Boundary Street, Kalgoorlie to Holmes Street, Golden Grove and bordering with Central Kalgoorlie, O'Connor, Golden Grove and Sport O' Kings. Mostly housing occupies South Kalgoorlie, however three high schools and one primary school, some medium industrial and small to medium businesses are also here.
* Sport O' KingsA small recent extension to the western side of South Kalgoorlie between Maxwell Street and the Kalgoorlie race course.
* Victory HeightsA housing-only suburb located on the opposite side of Fairways on Burt Street. Bordering with Golden Grove, O'Connor, Fairways and Boulder.
* West KalgoorlieKalgoorlie's main industrial area. It is the first suburb as you approach Kalgoorlie on the Great Eastern Highway. Features the city's airport and small, medium and heavy industrial. Currently under expansion further west (ANZAC Drive Industrial Estate.)
* West LamingtonThe western tip of Lamington built in the eighties. Mostly housing with one shop, sporting facilities and an arboretum nature reserve.
* WilliamstownThe small remains of East Kalgoorlie before being swallowed up by the Super Pit. Still existing area features mostly housing with one primary school, and is home to the Mt. Charlotte mine shaft and Nanny Goat Hill.

The town is located on the main East-West rail corridor across Australia, and was onbce a between the 's narrow gauge and the towards the . For eastward train travellers, on the trans-continental "" service, Kalgoorlie is the last town encountered for hundreds of kilometres before entering the vast expanse of the . The "Prospector" train run by also provides daily services to Perth.

Kalgoorlie is linked to Perth by the , and is also on the .

Kalgoorlie has a dry climate with hot summers and cool winters. The average annual rainfall is 260mm on an average of 65 days and, while the average rainfall is fairly evenly distributed throughout the year, there is considerable variation from year to year.

January is the hottest month with an average maximum temperature of 33.6°C, but temperatures above 40.0°C occur nearly once a week when hot, dry, north to northeasterly winds arrive. Such high temperatures are usually followed by a cool change from the south and occasionally with a thunderstorm.

By contrast winters are cool with July average maximum and minimum temperatures being 16.5°C and 4.8°C respectively. Cold wet days with a maximum below 12.0°C occur about once every winter. The lowest maximum temperature recorded is 7.2°C on 19 July 1961. Overnight temperatures fall below freezing about 4 times in a typical winter. Such events occur on clear nights following a day of cold southerly winds.

There are currently 10 primary schools, 4 high schools and 1 university in the Kalgoorlie-Boulder area.

Kalgoorlie-Boulder's location being approximately 600km from Perth contributes to high levels of participation in , and in the town. Other popular sports in Kalgoorlie include soccer, , , and .

*
*
* (proposed Australian state with its capital in Kalgoorlie)