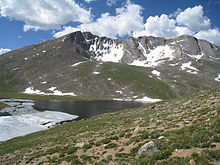 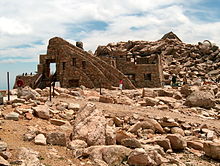 The partially-rebuilt remains of the Crest House serve as an observation platform near the summit.

Mount Evans is a 14,265 feet (4,348 m) mountain in the Front Range region of the Rocky Mountains, in Clear Creek County, Colorado. It is one of 54 fourteeners (mountains with peaks over 14,000 feet (4,300 m)) in Colorado, and the closest fourteener to Denver. It is often compared to Pikes Peak - another Front Range fourteener - which it exceeds in elevation by 154 ft (50 m).

The peak is one of the characteristic Front Range peaks, dominating the western skyline of the Great Plains along with Pikes Peak, Longs Peak, and nearby Mount Bierstadt. Mount Evans can be seen from over 100 miles away to the east, and many miles in other directions. Mount Evans dominates the Denver Metropolitan Area skyline, rising 9,000 feet above the area. Mount Evans can be seen from points south of Castle Rock, up to (65 miles (105 km) south) and as far north as Fort Collins (95 miles (153 km) north), and points east of Strasburg (105 miles (169 km) east). In the early days of Colorado tourism, Mount Evans and Denver were often in competition with Pikes Peak and Colorado Springs.

Mount Evans is the highest peak in a massif known historically as the Chicago Peaks.[3] The peak is 38 miles (61 km) west of Denver, "as the crow flies", and approximately 51 miles (82 km) by road, via Idaho Springs. The other peaks in the massif are:

At least 7 deep glacial cirques cut into the Chicago Range. The cirques around Mount Evans are the deepest cirques in the Colorado Rockies.[10] The bottoms of many of these contain tarns, the most notable being:

The Mount Evans Scenic Byway consists of Colorado State Highway 103 from Idaho Springs, Colorado on I-70 about 13 miles (21 km) to Echo Lake, and Colorado 5 from Echo Lake 15 miles (24 km), ending at a parking area and turnaround just below the summit. The latter has long been the highest paved road in North America and is only open in the summer. Colorado 103 continues east from Echo Lake to Squaw Pass, from which it connects, via Clear Creek County Road 103 and Jefferson County Road 66, to Bergen Park from which Colorado 74 leads to Evergreen Colorado.[11]

The Guanella Pass Scenic Byway passes within 4 miles west of Mount Evans, linking Georgetown and I-70 with Grant and US 285, 22 miles to the south.[12]

A marked hiking trail roughly parallels the highway from Echo Lake to the summit, and a second marked trail links Guanella Pass to Mount Bierstadt. A difficult side route of the latter climbs to the northeastern peak of The Sawtooth, from which an easy ridge leads to the summit of Mount Evans.

Mount Evans was originally known as Mount Rosa or Mount Rosalie. Albert Bierstadt named it for the wife of Fitz Hugh Ludlow who he would later marry. The name is also a reference to Monte Rosa, the highest peak in Switzerland. Bierstadt and his guide, William Newton Byers approached the mountain along Chicago Creek from Idaho Springs in 1863, and spent several days painting sketches of the mountain from the Chicago Lakes before climbing to Summit Lake and onward to the summit.[14] Bierstadt's sketch Mountain Lake accurately portrays the view of Mount Spalding over the Chicago Lakes.[15] His painting Storm in the rocky mountains is based on that and other sketches.[16]

A second claim to be the first to ascend is attributed to Judge Lunt and a friend in 1872.[citation needed] William Henry Jackson, attached to the Hayden Survey visited the Chicago Lakes in 1873, where he took numerous photographs; the summit of Mount Evans is barely visible in several of these, peeking over the col between upper Chicago Lake and Summit Lake.[17] The Hayden survey reported that Mount Rosalie was 14,330 feet above sea level, measured by triangulation.[18][19]

In 1895, Colorado's legislature officially renamed the peak in honor of John Evans, second governor of the Colorado Territory from 1862 to 1865.[20]

After a toll road was built to the summit of Pikes Peak, Robert Speer, mayor of Denver, asked for funds to build a road to the summit of Mount Evans. Construction began in 1917 and concluded on October 4, 1927. As of 2009, the Mount Evans Scenic Byway, leading to the summit overlook, is the highest paved road in North America.[21] This road has made Mount Evans a very accessible peak to all varieties of tourists, mountaineers and scientists. The road remains free, but in the late 20th century, the U.S. Forest Service began collecting a user fee for use of forest service facilities along the road, including scenic overlooks.[22]

The ruins of the Crest House (1941–1942) sit nearby. Once containing both a restaurant and a gift shop, it burned down on September 1, 1979 and was not rebuilt, but remains as a place of contemplation today. The rock foundation and walls remain as a windbreak for mountain travelers, and the viewing platform is one of Colorado's premier scenic overlooks.

The atmospheric pressure on the summit is around 460 torr, while a standard atmosphere (sea level) is 760 torr. At this pressure, many people suffer from altitude sickness.[23] Federal Aviation Regulations require use of supplemental oxygen at all times when flying at this altitude.[24] 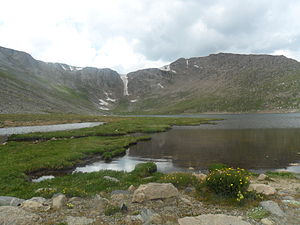 The slopes of Mount Evans include several distinct environments. Below Echo Lake, the montane forest is dominated by lodgepole pine (Pinus contorta) and in some areas, blue spruce (Picea pungens), with patches of quaking aspen. Echo Lake is high enough to be in the subalpine forest, where engelmann spruce (picea engelmannii), subalpine fir (Abies lasiocarpa) and bristlecone pine (pinus aristata) dominate.

Above tree line, the landscape is mostly alpine tundra. In the lower tundra, dwarf willow (Salix herbacea) is common, along with a wide variety of flowering plants such as Rocky Mountain Columbine (Aquilegia saximontana) and various species of dwarf alpine Sunflowers. Toward the summit, the vegetation shrinks until the largest plants are little more than compact green cushions in the cracks between the rocks. Here, Alpine Forget-me-not (Myosotis alpestris) plants with hundreds of blossoms occupy areas of only a few square centimeters and rise only centimeters above the soil surface.

The tundra around Summit Lake, particularly in Summit Lake Flats, the gently sloping area east of the lake, is frequently described as the southernmost area of arctic tundra in the world because it is water saturated and underlain by an extensive area of permafrost. 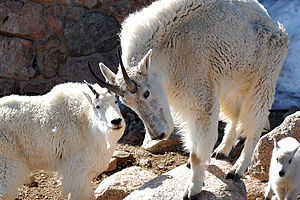 The top predators found in the area are mountain lions (puma concolor), anywhere on the mountain, and black bears (Ursus americanus), generally below tree line. These prey on bighorn sheep (Ovis canadensis) and mountain goats (Oreamnos americanus),[29] as well as one of the highest densities of yellow-bellied marmot (marmota flaviventris) in the region. Above tree-line, pikas (Ochotona princeps) are common. Below tree line, elk (cervus canadensis) and mule deer (odocoileus hemionus) are common.

Among birds, the white-tailed ptarmigan (lagopus leucurus) are present on the mountain, but so well camouflaged that they are difficult to see even when almost underfoot.[30] Brown-capped rosy finches (leucosticte australis), pipits and rock wrens (salpinctes obsoletus) are also seen near the summit.[31]

Mount Evans was carved from the rock of the Mount Evans Batholith, formed by an intrusion of magma into the earth's crust about 1.4 billion years ago (in the Mesoproterozoic Era of the Precambrian Eon). Much of the rock is granodiorite, a close relative of granite, modified by later intrusions of quartz and pegmatite.[32]

The body of this batholith has been deeply cut by glacial cirques and canyons. Each of the nearby lakes, Summit Lake, the Chicago Lakes, Lincoln Lake and Abyss Lake are tarns located in cirques or glacial canyons surrounding Mount Evans.[33] Echo Lake was dammed by a lateral moraine of the glacier that formed Chicago Canyon. Prior to glaciation, Mount Evans, Long's Peak and several other summits were monadnocks in an upland Peneplain. Glaciation has not entirely destroyed the ancient Flattop Peneplain, named for Flattop Mountain in Grand County. The peaks of these mountains are all remnant features of this peneplain.[34]

View from the summit of Mount Evans of the end of the Mount Evans Scenic Byway, Crest House and the Meyer-Womble Observatory, 2010.

The easy access to the summit provided by the Mount Evans Highway has made it a popular location for scientific research. Arthur H. Compton conducted pioneering research on Cosmic Rays on the mountain in 1931, shortly after the road to the summit was completed. The University of Denver built a pair of A-frame buildings on the summit to house cosmic-ray researchers.[35][36] In By the 1950s, Mount Evans, the Aiguille du Midi, the Pic du Midi and the Jungfrau were considered the premier locations for high-altitude physics experiments.[37]

The first accurate measurement of the lifetime of the muon, originally called the mesotron, using sites at Mount Evans, Echo Lake, Denver and Chicago by Bruno Rossi in 1939. This experiment verified the reality of time dilation, one of the key predictions of Einstein's theory of relativity.[38][39]

In the summer of 1948, MIT, Cornell, Princeton, NYU, the universities of Michigan and Chicago, along with the University of Denver conducted an intensive experimental program on the mountain and at Echo Lake. Bruno Rossi and Giuseppe Cocconi were among those involved.[40]

In 1965, the Midwestern Universities Research Association began doing high-energy physics experiments on the summit using cosmic rays to explore energies above those accessible with the most powerful particle accelerators of the day. The first experiments were conducted in a semi-trailer, and then in 1966, a temporary laboratory building was erected near the summit. This building was moved to Echo Lake that fall, where research continued until 1972.[41]

The University of Denver erected the 0.6m (24 inch) Ritchey-Chrétien telescope in its summit laboratory in 1972. This was used to observe Comets Kohoutek and Halley in 1972 and 1986. In 1996, the University finished construction on the Meyer-Womble Observatory, near the site of the A-frame laboratory buildings. At 14,148 feet (4,312 m) this was, from 1972 to 1999, the highest optical observatory.[26] It is now the second highest.

Mount Evans has also been the site of significant research in the life sciences. In 1940, for example, it was the site of a significant study of high-altitude physiology.[23] Pioneering studies on the effects of altitude training on track athletes were conducted on Mount Evans in 1966.[42]

Mount Evans towers above the city of Denver 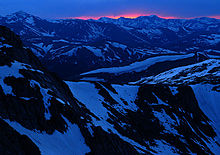 View from the summit at dusk