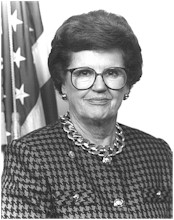 Vucanovich was born in , . Her father was , of Irish ancestry from ; between the wars he was chief engineer for the Department of Public Works, and during rejoined the Army to become Deputy Commanding General of the . Her mother, Maria Ynez White, was of English and Hispanic ancestry from . Barbara grew up in and attended a private, all-girls school. She received her college education from . She married James Henry Bugden at the age of 18, but became separated when her husband was assigned overseas during the war. She was employed by several New York businesses during the 1940s. In 1949 she moved to and obtained a divorce. She married Kenneth Dillon in 1950, a founding partner in the law firm Vargas, Dillon, and Bartlett. She became a widow on Dillon's death in 1964. She married George Vucanovich in 1965; George introduced her to .

In 1974, Vucanovich got her first taste of politics when she was hired as a staff member for Nevada Senator Paul Laxalt.

When Nevada earned a new congressional district after the , Laxalt urged Vucanovich to run. She won handily and served in Congress from 1983 until her retirement in 1997. She only faced serious opposition once, in 1992.

Shortly after starting in office, she was diagnosed and had surgery for breast cancer in early 1983. Vucanovich served as of the , before being promoted to the . She also served on the Appropriations Subcommittee on Military Construction. She was a member of the Conservative Opportunity Society, a group led by with the goal of achieving Republican control of the House of Representatives, which was accomplished in the 1994 election. She helped draft two of the ten bills that were part of the Contract with America. She served on the Presidential Debate Commission from 1987 to 1997.

Since her retirement, Vucanovich has continued to work in politics, mainly serving on external committees.

Her daughter, Patricia Dillon Cafferata, has served as Nevada State Treasurer and as District Attorney in three Nevada counties, and is also Vucanovich's biographer.