Brighton and Hove is a unitary authority area and city on the south coast of England. It is England's most populous seaside resort.

In 1997 Brighton and Hove were joined to form the unitary authority of Brighton and Hove, which was granted city status by Queen Elizabeth II as part of the millennium celebrations in 2000.

Brighton and Hove forms part of the Brighton/Worthing/Littlehampton conurbation, the 12th largest conurbation in the United Kingdom. Along this area of the south coast, there is little or no gap of countryside between these large towns and city. Directly to the west is Shoreham-by-Sea, and a short distance to the east are Peacehaven and Newhaven. The city, district and urban areas of Brighton and Hove have the biggest populations in the South East England region.

Brighton and Hove themselves were results of amalgamations:

The football team, Brighton & Hove Albion F.C., predates the unification of the two boroughs by 96 years.

On 15 October 2004, Brighton and Hove was granted Fairtrade City status.

Elections are held every four years, with the last elections occurring on May 5, 2011.[2] 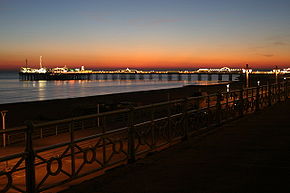 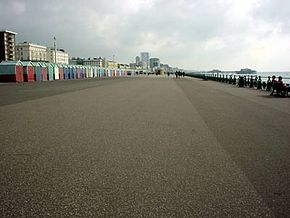 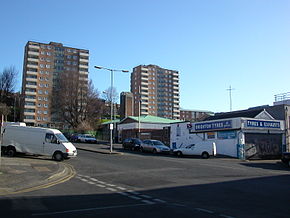 Flats in Ashton Rise, between the Hanover area and the seafront 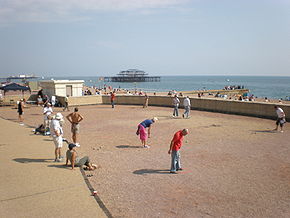 The leader of the council elected on 19 May 2011 is Councillor Bill Randall (Green Party), although the Greens only hold a minority of seats. The current mayor of Brighton and Hove is Councillor Anne Meadows.[3] John Barradell, OBE, started as Chief Executive on 1 October 2009. There are six directorates in the council structure.[4]

Introduced in June 2008, the council's corporate priorities are:

The city of Brighton and Hove comprises the following areas (not necessarily directly corresponding to administrative wards or parishes):

The first census of Brighton was in 1801.

In the same census, Brighton and Hove had the highest percentage of citizens indicating their religion as Jedi among all principal areas of England and Wales).[5] The next census was carried out on 27 March 2011.

Wording of the Letters Patent

The Letters Patent of 2000 that confers City status is worded thus:

ELIZABETH the SECOND BY THE GRACE OF GOD OF THE UNITED KINGDOM OF GREAT BRITAIN AND NORTHERN IRELAND & OF OUR REALMS & TERRITORIES QUEEN HEAD OF THE COMMON WEALTH DEFENDER OF THE FAITH.
To all to whom these Presents shall come Greeting. Whereas We for divers good causes and considerations Us thereunto moving are graciously pleased to confer on the Towns of Brighton and Hove the status of a city Now Therefore Know Ye that We of Our especial grace and favour and mere motion do by these Presents ordain declare and direct that the TOWNS OF BRIGHTON AND HOVE shall henceforth have the status of a CITY and shall have all such rank liberties privileges and immunities as are incident to a City. In witness whereof We have caused Our Letters to be made Patent Witness Ourself at Westminster the thirty first day of January in the forty ninth year of our reign.

This is a chart of trend of regional gross value added of Brighton and Hove at current basic prices published (pp. 240–253) by Office for National Statistics with figures in millions of British Pounds Sterling.