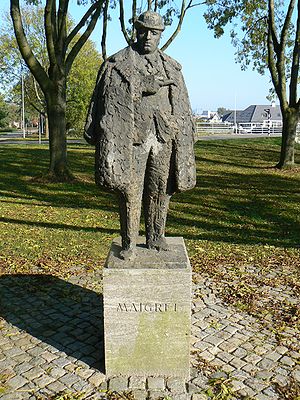 Maigret statue by Pieter d'Hont in Delfzijl. The unveiling was made by Simenon himself on September 3, 1966, at the place where he had written the first Maigret novel, and was attended by Maigret actors from various countries.[1] 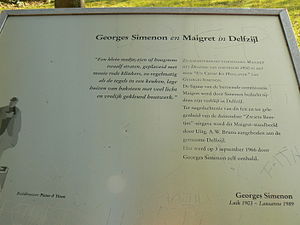 Seventy-five novels and twenty-eight short stories about Maigret were published between 1931 and 1972, starting with Pietr-le-Leton (Latvian Pete) and concluding with Maigret et Monsieur Charles (Maigret and Monsieur Charles). The Maigret stories were also adapted for television and radio.

Some of his trademark features are his pipes, his mixed approach to detecting (at times relying on pure intuition, at times on method), and his fondness for alcohol. Often during an investigation, he will step into a small cafe or bar for a drink and possibly a light lunch. His drink of choice is beer or cider, though he has also been known to drink pastis as well as wine at dinner or when it is the only thing available. This is not to say that he is a drunk, as it is a matter of personal pride that he can hold his liquor, and would be deeply embarrassed if he allowed himself to get intoxicated. Maigret often wears a heavy overcoat, even when traveling to the Riviera — a fact which leads people unfamiliar with him to mark him instantly as a policeman.

In the books he is described as a stocky man of average height, slightly overweight but not obese. He dislikes climbing stairs, and usually uses a police driver or cab to travel around during his investigations, though he has been known to walk occasionally.

Maigret was supposedly born in 1884 at Saint-Fiacre in the Allier department (where there is no such village), although different birth dates can be concluded from different books. He is married to Louise, who is almost exclusively referred to as Madame Maigret in the books. They had a daughter who died at birth.[2]

While not having any children of his own, Maigret has shown himself to be fond of children, treating them with kindness and patience, and often indulging them. He is shown as living with his wife at 132 Boulevard Richard-Lenoir in most books but, in Maigret in Retirement, he is said to have retained his apartment on the Place des Vosges in the 4th arrondissement of Paris.

He is usually successful. His relationship with his sidekicks, usually junior Metropolitan officers or the local constabulary (when he is away from Paris), is most often portrayed as a mentor-pupil relationship. Maigret is genuinely proud and happy when one of his junior officers meets with some professional success. The role of mindless puppet, only there to contrast with the brilliance of Maigret, is reserved for the public prosecutor or more frequently the Juge d'instruction or Examining Magistrate.

There have been numerous incarnations of Maigret on the small screen all around the world. He has been portrayed by French, British, Irish, Austrian, Dutch, German, Italian, and Japanese actors.

In France, Jean Gabin played the part in three films and is seen by many as the best Maigret. Arguably, the most celebrated French version stars Bruno Cremer, who has played him in 54 adaptations from 1991-2005. Jean Richard had an earlier long-running series playing the character on French television — however, Simenon himself is said to have disliked Richard's Maigret because he would not take his hat off when entering a room. 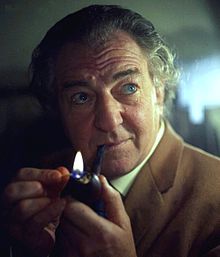 Actor Rupert Davies as Maigret in Murder on Monday

The Italian actor Gino Cervi played the character on Italian television, starting from 1964 up to 1972; Simenon himself considered Cervi's interpretation of the character to be possibly the best.

In Japan, Kinya Aikawa played Megure, a Japanese-born equivalent to the French Maigret, reinvented in a modern Japanese setting, in Tōkyō Megure Keishi[3], a 25-episode TV Series aired from April 14 to May 29, 1978 on Asahi TV. Megure/Maigret's wife was played by Tomomi Sato, who earned the praises of Simenon himself: "The best 'Madame Maigret' in my opinion, even including the French ones, was the 'Madame Maigret' on Japanese television. She was exactly right"[4].

One of the most popular versions of the Chief Inspector was that played by British actor Rupert Davies who made his debut on October 31, 1960. Davies took over the part after Basil Sydney who appeared as Maigret in the original transmitted pilot proved unavailable due to ill-health. Davies went on to star in 52 adaptations for BBC TV in the 1960s. His portrayal won two of the highest accolades: his versions were dubbed into French and played across the Channel; and Simenon himself presented Davies with a novel inscribed to his "perfect Maigret".

The British television channel ITV produced an adaptation of Maigret in 1992 and 1993, in which Michael Gambon starred as Maigret. A less successful earlier version (1988) on ITV cast Richard Harris in the lead role, with a somewhat idiosyncratic reading of the character.

Maurice Denham played Chief Inspector Maigret in a series of half-hour dramatizations of the novels on BBC Radio 4 from 1992 to 2002, with Michael Gough playing Georges Simenon.

The format of each play would begin with Maigret and Simenon sitting together discussing some fact or event which would then lead into Maigret's recounting a particular case, with Simenon asking questions or commenting from time to time.

After Denham's death, the series was continued in 2003 with Nicholas Le Prevost playing a gruffer, more earthy Maigret and Julian Barnes playing Simenon. 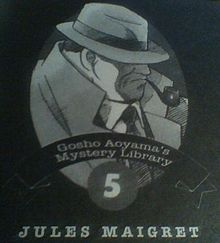 Maigret, as he appeared in volume 5 of Case Closed

Inspector Joseph Meguire/Jozo Megure from Case Closed is loosely based on Maigret, in both appearance and name. Both are police inspectors, and are known for wearing hats and overcoats. The rendering in the Japanese syllabry for Megure and Maigret is the same (me-gu-re, in other words, the names are pronounced the same in Japanese).

Maigret himself was also highlighted in volume 5 of the Case Closed manga's edition of "Gosho Aoyoma's Mystery Library, a section of the graphic novels (usually the last page) where the author introduces a different detective (or occasionally, a villain) from mystery literature, television, or other media.

List of Maigret novels by date of French-language publication.

List of Maigret short stories by date of publication.