"Not to be confused with ." 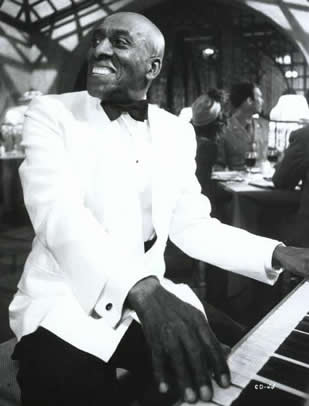 Benjamin Sherman "Scatman" Crothers (, – , ) was an American , , and known for his work as Louie the Garbage Man on the TV show "", the voice of the Jazz in "" and as Dick Hallorann in "The Shining" in 1980. He was the voice of in the animated TV version of and of the title character in , both produced by .

Crothers was born in . He got the name Scatman when he auditioned for a radio show in 1932 at the former WSMK (now ) in . The director didn't think his given name was catchy enough, so Crothers told the director to call him Scat Man because of his talent at . He continued to enjoy this talent throughout his career, even teaching scat singing to college students. Later, the nickname was condensed to Scatman by . (Crothers should not be confused with , who had the hit "Scatman" in 1995.)

Crothers started his musical career as a 15-year-old drummer in a band in his home town of . He played a variety of instruments, including drums and guitar, on jazz club band circuits in his early days as an entertainer. He formed his own band in the 1930s and finally traveled to with the band in 1948.

Some sources erroneously list him as a dancer in the short, "Symphony in Black" (1935), who is first seen dancing with a woman in his apartment before taking her out. Later, he encounters his jilted , played by the also uncredited . They briefly have words, he pushes her down and exits with his new girlfriend before her song. This role was actually played by , who also appears at the end of the short.

Even though Crothers worked in television at the beginning of his career, he really came into his own in the medium doing voiceover work on several animated series, beginning with his voicework in Disney's "". In the 70s, fans recognized his voice as "", and the voice of in the "" cartoon series. He made guest appearances on many popular shows, including "" in 1971, "Ironside" in 1973, "" and "" in 1974 and "" in 1980.

During his appearance on "" he joined for two musical numbers. One of which was a memorable version of the standard "All of Me", where he accompanied Foxx on guitar. Crothers starred in three short-lived 1980s television series: "One of the Boys" (1982), "Casablanca" (1983), and "Morningstar/Eveningstar" (1986). He also performed the voice of Jazz on "Transformers" (1984–1986) up until and including the .

Though of all television characters that he played, he was most noted for his supporting role Louie Wilson (the garbage man) on the sitcom "".

He is buried next to his wife Helen (1918–1997) in the Forest Lawn, Hollywood Hills Cemetery in