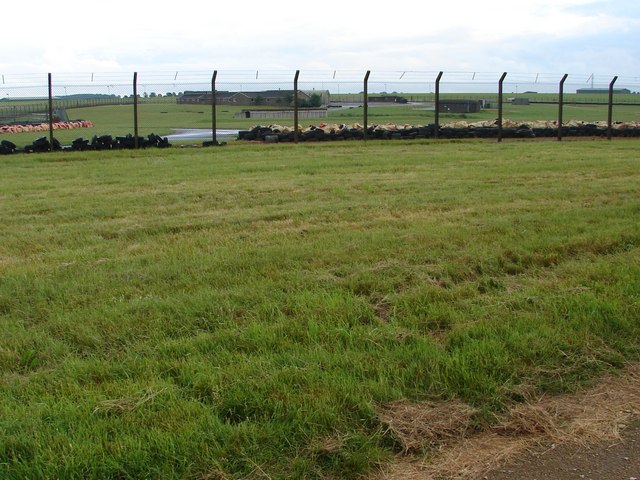 RAF Barkston Heath Airport codes|N/A|EGYE is a station near , .

The primary function of RAF Barkston Heath is as a Relief Landing Ground for the flying training activities at RAF Cranwell. It is a regular home to only one unit, the Joint Elementary Flying Training School which operates 18 Mk II Firefly two seat trainers. The , provides elementary flying training for and Army Air Corps students. The DEFTS flies trainers. The distinctive black and yellow aeroplanes are a common sight above the skies of Lincolnshire.

In the late 1930s, an uncultivated tract of land 2 miles east of village, was prepared as a relief landing ground for aircraft operating from nearby . With the outbreak of war in 1939, these facilities were gradually developed into Barkston Heath airfield, although the facility remained basically a satellite landing ground for use by training aircraft.

The airfield landing area strips were 3.900ft east to west and 3,000ft north to south, all grass, but free-drained. Four Blister hangars and a few other buildings were erected for basic support during the early years of hostilities. Then in 1941. the site was surveyed for an airfield built to Class A standard and all flying was discontinued in the summer of 1943 so that construction of concrete runways could commence. Runways were a main of 6.000 ft at 07-25, and two secondaries of 4,200ft at 11-29 and 4,200ft at 01-19. Three pans and 48 loop aircraft hardstands were built round the concrete perimeter. Hangars were a Blister type and a T-2, both beside the perimeter track. The work was sufficiently well advanced by January 1944 for the airfield to become available for flying again.

By this time, in common with a number of other airfields in the area that had been planned for the RAF's No. 7 Group. Barkston was made available to the . It was earmarked for basing troop carrier units scheduled to be transferred from to participate in the forthcoming cross-Channel invasion, Operation "Overlord".

During its time as a USAAF airfield, Barkston Heath was designated as USAAF station 483.

The first US personnel arrived on 13 February from Sciacca, Sicily, and most of their s on the 17th and 18th, although not all aircraft were in place until a month later. These new occupants were the 61st Troop Carrier Group with its components being:

The 61st TCG was part of the 52nd Troop Carrier Wing, . During the following week the aircraft complement was built up to 64 C-47s and similar numbers of and Waco CG-4A gliders. A busy training schedule followed with paratroops of the 507th Parachute Infantry Regiment who were encamped in the locality.

With the Ninth Air Force requirement for glider erection at Barkston Heath, four addilinnal T-2 hangars were built during the early spring of 1944. However, owing to the rolling topography, the only suitable area available was un the far side of the B6403, this being part of the old Roman Ermine Street which ran along the eastern boundary of the airfield. Unusually, the four additional T-2s were not dispersed but erected in a row and linked by two access roads across the main road.

For operations during 6/7 June the group was awarded a for dropping paratroops of and supplies near . Involved in the first drops were two serials of 36 C-47s and C-53s, each serial having taken off in a remarkable 2½ minutes.

The headquarters of the 61st Troop Carrier Group moved to an (ALG) at Abbeville (ALG B-92), in , on 13 March 1945, but its squadrons went to from where they participated in Operation "Varsity" on 24 March carrying British paratroops who dropped near .

From its base in France, the 61st TCG provided transport services in the European theater, hauling gasoline, ammunition, food, medicine, and other supplies, and evacuating wounded personnel. The group moved to in May 1945 and was assigned to the Air Transport Command. Used C-47's to transport troops returning to the US. Inactivated in Trinidad on 31 July 1945.

An increased demand for theatre air transport brought the 349th TCG from Baer Field in late March 1945 with its Curtiss C-46 Commando transports. Group headquarters was established at Barkston on 30 March, but the group only remained three weeks, moving to Rove/Amy, France, on 18 April.

In May, a detachment of C-46s from this group returned to airlift British 1st Airborne Division troops to .

The station was returned to the RAF in June 1945 and was turned over to No. 256 Maintenance Unit handling war surplus storage. In September that year, part of the camp was used for primary training by No. 2 RAF Regiment (Sub) Depot but this activity did not endure beyond the following summer. No. 256 MU continued to use the hangars until late in 1948 when the station was put on a care and maintenance status.

The RAF College at Cranwell recommenced using the airfield as a satellite in May that year. basing a number of aircraft there, the station continuing in this capacity until July 1966 when manning was reduced and confined to refuelling and air traffic services.

Today, Barkston Heath remains a beautifully unspoiled Second World War airfield. It remains an active base, serving RAF Cranwell in a training role, Harvards giving way to Provosts. then to Jet Provosts, Tucanos and Slingsby Fireflies. These are operated by Babcocks, on behalf of the Defence Elementary Flight Traing School. Because the aircraft used are trainers, the runways have not needed to be lengthened, preserving the layout the station had during the war. Many of the wartime loop dispersals still survive, along with the T-2 hangars.

In 1983, a detachment of No. 25 Squadron with Bloodhound surface-to-air missiles was based there. From 2002 to 2004 the Battle of Britain Memorial Flight was temporarily based at Barkston whilst their home facilities were resurfaced.

The airfield was also used during the 1980s by a number of privately operated aircraft of various types, and for several years it has also been the venue for the British National Model Aircraft Championships.