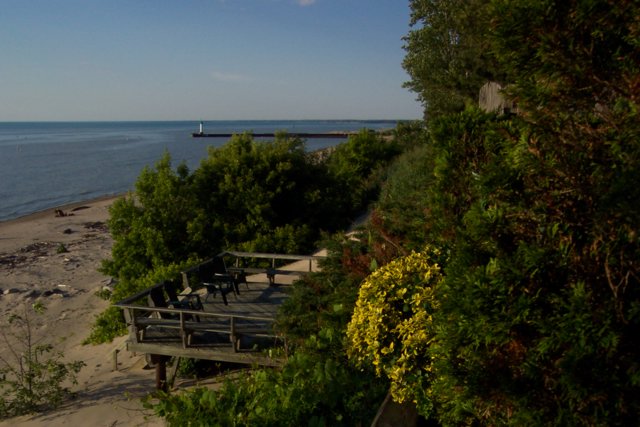 Grand Bend, often referred to as simply "The Bend" or "GB," is a community located on the shores of and a part of the municipality of Lambton Shores in the county of Lambton.

Grand Bend is home to a variety of stores and eateries. The main strip is the centre of activity in the town, with shopping during the day and night life venues during the evening drawing crowds. The atmosphere of Grand Bend has given the town a reputation of being Florida north. As well as Main Street, Grand Bend acts as a regional cultural centre, boasting art galleries in the town and the Huron Country Playhouse on the outskirts.

The settlement began in the 1830’s when a group of English and Scottish settlers bought lots from the , a land development firm. One of the original settlers, Benjamin Brewster gave his name to the village after he secured rights to dam the Ausable River and started a sawmill in 1832. The villagers were mainly the families of the millhands and fisherman. Their homesteads were situated on the south side of the present village.

For twenty years Brewster existed as an isolated lumbering community. Until the opening of the highway to Goderich in 1850, both people and provisions had to travel by water. Once road connections were complete, the village was no longer solely dependent on the forests for its livelihood and opportunities for new businesses emerged.

Typical of many pioneer communities, the village assumed many different names throughout its history&mdash;Brewster, Websterville and Sommerville are all recorded. Grand Bend survived as a name, perhaps because it was the most appropriate&mdash;the tight hairpin turn in the original Ausable River where mills were first established.

Improved roads and the arrival of the automobile near the turn of the century had the greatest influence on the growth of Grand Bend. Businesses were established to serve visitors and travelers along the highway and with the beach, "The Bend" became a summer destination.

Today, Grand Bend's year-round population of 2,000 people swells to about 50,000 in the summer months. Grand Bend is known both for being part of hundreds of miles of open beach on the "West Coast of Ontario" and as an active night life hotspot. Fine dining, roadhouse fare, and burger and fries are all available on the two main roads of Grand Bend, Highway 81 (Main Street) and Highway 21 (Ontario Street). Several motels and Bed and Breakfasts provide ample accommodations for the many crowds that flood into Grand Bend in the summer season. The sandy beaches are crowded on weekends and the water is clean and the sand stretches out into the water gently sloping manner which provides a comfortable and safe swimming experience. When the winds are out of the northwest you know that the waves are going to grow in size and waveboarders take to the lake."National Geographic" says that Grand Bend has one of the 10 most beautiful sunsets in the world, which is thought to be attributable to the high levels of particulate matter that flow into the area from the Ohio Valley.

The and the Lambton Heritage Museum are located seven kilometres south of Grand Bend.

The demographic population of Grand Bend is quite diverse. Families owning vacation homes in the adjacent communities of Oakwood Park, Southcott Pines and , are from Ontario and Michigan, including: ; London; Windsor; ; and locations as far as , , , and the American west coast.