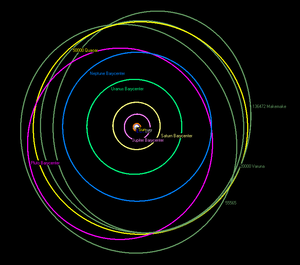 The orbits of various cubewanos compared to the orbit of Neptune (blue) and Pluto (pink).

/ˌkjuːbiːˈwʌnoʊ/ "QB1-o")[1] is a low-eccentricity Kuiper belt object (KBO) that orbits beyond Neptune and is not controlled by an orbital resonance with Neptune. Cubewanos have orbits with semi-major axes in the 40–50 AU range and, unlike Pluto, do not cross Neptune’s orbit. That is, they have low-eccentricity and sometimes low-inclination orbits like the classical planets.

The name "cubewano" derives from the first trans-Neptunian object (TNO) found after Pluto and Charon, (15760) 1992 QB1. Similar objects found later were often called "QB1-o's", or "cubewanos", after this object, though the term "classical" is much more frequently used in the scientific literature.

Objects identified as cubewanos include: 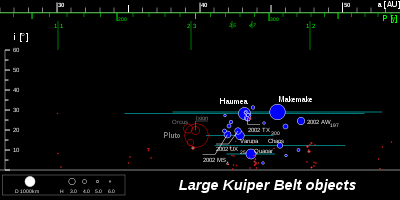 The orbits of the large cubewanos (in blue) with the large plutinos (in red) for comparison (H<4.5). The horizontal axis represents the semi-major axes. The eccentricities of the orbits are represented by segments (extending from perihelion to aphelion) with the inclinations represented on the vertical axis.

Most cubewanos are found between the 2:3 orbital resonance with Neptune (populated by plutinos) and the 1:2 resonance. 50000 Quaoar, for example, has a near-circular orbit close to the ecliptic. Plutinos, on the other hand, have more eccentric orbits bringing some of them closer to the Sun than Neptune.

The majority of objects (the so-called 'cold population'), have low inclinations and near-circular orbits. A smaller population (the 'hot population') is characterised by highly inclined, more eccentric orbits.[4]

The Deep Ecliptic Survey reports the distributions of the two populations; one with the inclination centered at 4.6° (named Core) and another with inclinations extending beyond 30° (Halo).[5] 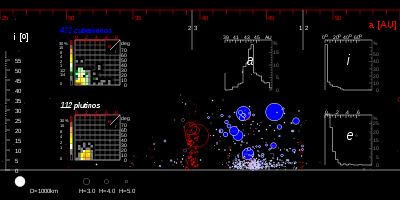 The vast majority of KBOs (more than two-thirds) have inclinations of less than 5° and eccentricities of less than 0.1. Their semi-major axes show a preference for the middle of the main belt; arguably, smaller objects close to the limiting resonances have been either captured into resonance or have their orbits modified by Neptune.

The 'hot' and 'cold' populations are strikingly different: more than 30% of all cubewanos are in low inclination, near-circular orbits. The parameters of the plutinos’ orbits are more evenly distributed, with a local maximum in moderate eccentricities in 0.15–0.2 range and low inclinations 5–10°. See also the comparison with scattered disk objects. 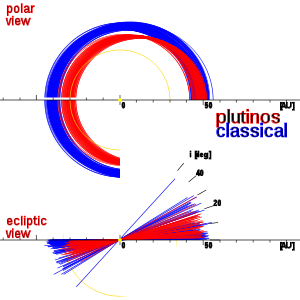 Polar and ecliptic view of the (aligned) orbits of the classical objects (in blue), together with the plutinos in red, and Neptune (yellow).

Another difference between the low-inclination (cold) and high-inclination (hot) classical objects is the observed number of binary objects. Binaries are quite common on low-inclination orbits and are typically similar-brightness systems. Binaries are less common on high-inclination orbits and their components typically differ in brightness. This correlation, together with the differences in colour, support further the suggestion that the currently observed classical objects belong to at least two different overlapping populations, with different physical properties and orbital history.[9]

Toward a formal definition

There is no official definition of 'cubewano' or 'classical KBO'. However, the terms are normally used to refer to objects free from significant perturbation from Neptune, thereby excluding KBOs in orbital resonance with Neptune (resonant trans-Neptunian objects). The Minor Planet Center (MPC) and the Deep Ecliptic Survey (DES) do not list cubewanos (classical objects) using the same exact criteria. Many TNOs classified as cubewanos by the MPC are classified as ScatNear (possibly scattered by Neptune) by the DES. Dwarf planet Makemake is such a borderline classical cubewano/scatnear object. (119951) 2002 KX14 may be an inner cubewano near the plutinos. Furthermore, there is evidence that the Kuiper belt has an 'edge', in that an apparent lack of low-inclination objects beyond 47-49 AU was suspected as early as 1998 and shown with more data in 2001.[10] Consequently, the traditional usage of the terms is based on the orbit’s semi-major axis, and includes objects situated between the 2:3 and 1:2 resonances, that is between 39.4 and 47.8 AU (with exclusion of these resonances and the minor ones in-between).[4]

These definitions lack precision: in particular the boundary between the classical objects and the scattered disk remains blurred. As of 2010, there are 377 objects with perihelion (q) > 40 AU and aphelion (Q) < 47AU.[11]

Introduced by the report from the Deep Ecliptic Survey by J. L. Elliott et al. in 2005 uses formal criteria based on the mean orbital parameters.[5] Put informally, the definition includes the objects that have never crossed the orbit of Neptune. According to this definition, an object qualifies as a classical KBO if:

An alternative classification, introduced by B. Gladman, B. Marsden and C. VanLaerhoven in 2007, uses 10 million years orbit integration instead of the Tisserand parameter. Classical objects are defined as not resonant and not being currently scattered by Neptune.[12]

Formally, this definition includes as classical all objects with the current orbits that

The first collisional family—a group of objects thought to be remnants from the breakup of a single body—is the Haumea family.[13] It includes Haumea, its moons, 2002 TX300 and seven smaller bodies.† The objects not only follow similar orbits but also share similar physical characteristics. Unlike many other KBO their surface contains large amounts of ice (H2O) and no or very little tholins.[14] The surface composition is inferred from their neutral (as opposed to red) colour and deep absorption at 1.5 and 2. μm in infrared spectrum.[15]

†As of 2008. The four brightest objects of the family are situated on the graphs inside the circle representing Haumea.