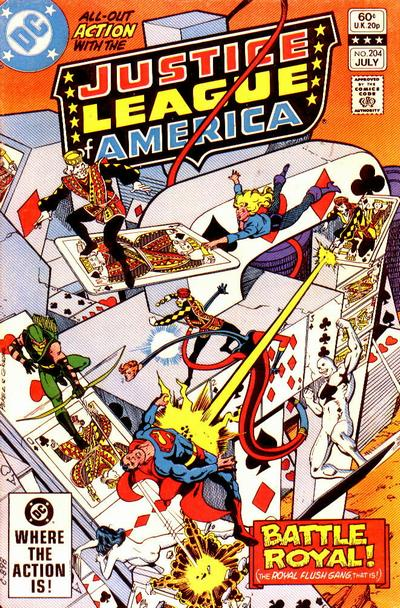 They are a group of -themed s who are usually thwarted by the es they encounter. They have code names based on a royal flush in Ace, King, Queen, Jack, Ten.

The original Royal Flush Gang was Professor Amos Fortune's childhood gang. With Fortune himself as Ace, they fought the Justice League on two occasions, using Fortune's luck-altering "stellaration" technology to realize the fortune-telling significance of playing cards. After Fortune abandoned the Gang, they attempted to steal paintings containing clues to a hidden treasure but were thwarted by the Joker's manipulations ("Joker" #6). Most of them then abandoned their criminal careers, although Jack briefly joined the as "Hi-Jack". Fortune's gang wore costumes based on the suit of clubs.In the pages of "JLA Classified", it was revealed the original Royal Flush Gang (sans Amos Fortune) reunited to fight the "Detroit Era" Justice League and their successors in the second gang. In this battle, the original members were killed.

The second Royal Flush Gang was set up by villain in "Justice League of America" #203. Hammond led the group as "Wildcard". This version wore costumes based on the suit of spades. The gang split up and went on to have separate criminal careers before re-establishing themselves, without Hammond. They were twice hired by as part of his manipulation of . Later, they were reorganized and reoutfitted by a successor to the Golden Age Green Lantern villain the Gambler, who was masquerading as the Joker.
*King (Joe Carny) -- The so-called "King of the Hoboes," Carny also suffered from . As Hammond's agent, he wore a costume that technologically enhanced his natural to the point of . Following the metagene bomb in "Invasion!" King became immortal. Although King is the highest ranking member of the gang, in poker the Ace ranks as the highest card in a royal flush.
*Queen (Mona Taylor) - Taylor was originally a Broadway star whose career was destroyed by her ongoing . As Hammond's agent, she wielded a sceptre that cast realistic illusions. After the Gambler reoutiftted the team, she began employing a wrist shooter that fires razor sharp spades.
*Jack (name unknown) - Originally a gigolo, he became a fugitive after inadvertently killing a client while attempting to steal her jewelry. As Hammond's agent, he wielded an energy-charged sword. The Gambler replaced his left eye with a cybernetically-activated laser weapon, making him a literal "one-eyed Jack." The removal of his eye to implant the laser initially impacted his sanity.
*Ten (Wanda Wayland) - Wayland was a test pilot fired for refusing her employer's sexual advances. As Hammond's agent, she wore a costume with energy blasters in its gloves. She has enhanced reflexes, and carries explosive playing cards.
*Ace ("Derek Reston") - The Ace was a superstrong android in the form of an African-American man. A later Ace, Ernie Clay, was recruited by King and used a strength-enhancing exoskeleton provided by the Gambler. In more recent appearances in "Starman" and "Infinite Crisis," however, the team was once again employing the robot Ace.

King, Queen, and Ten also have blaster-pistols. The Gang fly on hovering playing cards. In the Gang's appearances in "Teen Titans", Ten had organized runaways as "Ten's Little Indians," a gang of thieves dressed as the two through nine of spades and armed with bows and trick arrows.

"" #121 revealed that the Royal Flush Gang had expanded. The Royal Flush Gang is now an organization that reaches across America, with cells in every major city. Instead of five members, each "cell" has fifty-two, split into four suits run by the "court cards". Each member has a playing card value, and those who rise or fall in the Gang's esteem gain or lose a "pip". Notably, Stargirl's father was a "Two"; upon defeating him, she transitioned from the Star-Spangled Kid identity to Stargirl in "JSA: All-Stars."

Recently, in " #2", the Joker tortures and kills the leadership of a local cell of the Royal Flush Gang from an unspecified city, after being rejected by the Society for his "instability". The King is the last one left alive and he mocks the Joker for being rejected. He kills the King with an electrical blast to the face. The dead gang is left in the ruins of a casino.

Another cell of the expanded version, this one stylized as a street gang, appear as members of the Society in "" and several of its tie-ins in other comics.

In the miniseries "Kingdom Come" by and , King is a member of 's Mankind Liberation Front. He apparently has gone separate from the Gang, but carries a cigarette pack with playing card markings and speaks in metaphors drawn from card games. There is also a man in the Justice League's prison who appears to be a new version of the Ace of Spades. According to the novelization, King is also newly immortal, and 's protogee.

The version of the Royal Flush Gang seen in the episode "The Wild Cards", is a quartet of thieves recruited by the mysterious Ace (here not an android). Ace is revealed to not only be in league with , but also to be the Joker in disguise. Batman figured that out when he noticed the Joker's headquarters had every card of the deck but one and every deck has a Joker. By the end of the episode, Ten switches sides and the rest of the Gang and Joker are captured.

In the "" series, the new Batman repeatedly faces a future version of the gang, who appear to be a family. They all mostly used various high-tech weapons, with the Walker parents as King and Queen, their son as Jack and daughter Melanie as Ten. It should be noted that this version of the gang resembles the group created by Hector Hammond, down to their riding hovering playing cards and Ace being an android. Its suggested that crime runs in the family: in the episode "King's Ransom" we learn that the former King was the father of the current Queen, with each new generation forming a new version or branch of the gang. Melanie Walker/Ten was also a romantic interest for Terry McGinnis, creating much the same conflict as existed between the original Batman and , so much so that Bruce Wayne mentions the relationship.

In a nod to the Batman Beyond series as a part of the DCAU, "Melanie Walker" was used as an alias by the 's Persophone prior to an appearance by the hacker at the 2006 San Diego Comic Con on July 22. [http://thealternativelostgame.blogspot.com/2006_07_01_archive.html (see the entry for July 21, 2006)]

Two other versions of this gang were seen in the animated continuity. According to the "Justice League" episode, "Wild Cards" the original Royal Flush Gang were orphans born with superpowers. After showing signs of these superpowers, the government took them away to a secret facility to use them as human weapons. It is revealed in that the five of them were involved in the experiments done by . During their confinement, the members of the Royal Flush Gang were educated by the government, and trained to use their powers. Breaking into the facility, The Joker murdered the staff, freed the gang, and they pledged their allegiance to him. They would later participate in a reality show in Las Vegas, helping the Joker in his plans to use Ace's power to drive the world into madness. During this time, they clashed with the Justice League and were thoroughly defeated. Ace was the only one to escape harm.
*Ace - Can create illusions, and drive people insane just by looking at them. Later, her powers developed into the ability to actually alter reality.
*King - Able to create fire blasts.
*Queen - Ferrokinesis (metal manipulation), she can change metal into different weapons and use it to attack her enemies.
*Jack - Complete body elasticity.
*Ten - Invulnerability and super strength, he feels no pain and appears to be just as strong as Superman.

The Royal Flush Gang in "Justice League" are voiced by the main cast of the "Teen Titans" series:

In the "" episode "Epilogue", Ace creates a new version of the gang to have friends to play with. stated that this was the second or third generation of the gang.

*King - Appeared to be a massive head with small limbs. Flew on a throne and fired beams from his eyes. His design is inspired by , a creation of (a comic book creator frequently called "The King.")
*Queen - A large woman with enhanced strength. Her design was clearly based upon the Queen of Hearts from Disney's Alice in Wonderland. When Ace died and the gang returned to normal, it was revealed that she was actually a man.
*Jack - A -styled warrior -- a nod to Cartoon Network's "". Additionally, he was also African, making reference to a
*Ten - A beautiful woman with long, extendable she could use like a whip, a reference to and her character in the film "10."

The people Ace empowered decided to go out and commit crimes instead. As the League battled the Gang (minus Ace), revealed that Ace was dying, and a possible psychic backlash caused by her death could kill millions. Batman volunteered to use a device to kill her before that could happen. Instead, he discarded the device and stayed with Ace, comforting her until she died quietly. With Ace gone, the remaining members of the gang lost their powers.