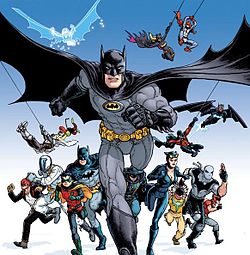 Throughout the stories published in DC Comics and in adaptations in other media since 1939, the Batman character has accumulated a number of recognizable supporting characters. The first Batman supporting character was Commissioner James Gordon, who first appeared in the same comic as Batman (Detective Comics #27), and is Batman's ally in the Gotham City Police Department. Robin, Batman's sidekick, was introduced in the Spring of 1940 and Alfred Pennyworth, Batman's butler, was introduced in 1943. Batman also forms strong bonds or close working relationships with other superheroes, including Justice League members Superman, Black Canary, and Green Arrow, as well as members of the Outsiders superhero team. Others such as Jason Bard, Harold, Onyx, and Toyman work for him. In addition, Batman has perhaps the most well known rogues gallery in fiction, including The Joker, Catwoman, and The Penguin.

The most notable member of the GCPD is Commissioner James Gordon, the police commissioner of Gotham City. Appearing alongside the main character in his first appearance, Gordon was the first Batman supporting character.[1] Batman has a strong (though secret and unofficial) working relationship with him.[2] Gordon, like other characters, has changed considerably over the years. Of particular note, is that in the early days of the characters, Gordon was not allied with Batman, and was more antagonistic towards him. However, he was a friend of Bruce Wayne.[1] In "Batman: Year One", Gordon is portrayed as one of the few honest, non-corrupt Gotham cops.[3] During "No Man's Land", Bruce offered him the knowledge of his secret identity, but Jim (still angry for Batman's early abandonment of Gotham in the days near the beginning of NML) refused to look and find out, hinting he may already know. Jim retired several months after NML,[4] but returned to duty in the One Year Later storyline.[5]

Members of the Gotham City Police Department have played prominent roles in Batman's extended 'family.' The GCPD were featured in their own series: the limited series Batman: GCPD and the ongoing series Gotham Central, in which they investigate the unusual crimes that plague the city, in a personal effort to minimize Batman's involvement.[6][7] Gotham Central series ended its 40 issue run in 2006.[8]

"Batman Family," is the informal name for a group of characters closely associated with Batman, generally costumed vigilantes who either have been trained by Batman or operate in Gotham City with his tacit approval. The group functions like a tactical unit of similarly-minded superheroes who operate in and around Gotham, with Batman as its team leader and, in many cases, its dispatch. Various members of the group are usually seen interacting with one another and assisting in each other's cases, even within their respective series. Although some members occasionally resent Batman’s intrusion into their lives, all respect him as a legend within the superhero community and rarely dare to challenge his authority.[9] Most of the members also have a strong rapport with the Dark Knight due to their long and close relationships with him over the years, and consider him a close friend and ally, and acknowledge that he most likely shares that sentiment, no matter how adverse he is to actually showing it.[10] In a 2002 storyline in which Bruce Wayne is accused of murder, Batman's friends gather to prove his innocence.[11] It has also been implied through Batman's history that this network serves as a surrogate family for Batman and keeps him from slipping too far into his ruthless vigilante persona.[12]

Mark Shaw was a human infiltrator for the Manhunters that would later distance himself from the group and become the super-villain Star-Tsar, infiltrating the Justice League as the Privateer. After some time in prison, he wiped his record with service in the Suicide Squad. Afterward, he would again go by the name Manhunter as a bounty hunter working with Oracle operating largely out of New York. Shaw would take down several of Batman's rogues before the two met battling the Sportsmaster.

Kate Spencer is the grand daughter of Phantom Lady that took up the title Manhunter and later joined the Birds of Prey. At one point, she became the district attorney for Gotham City where she continued to operate alongside the Birds as Manhunter.

Batman regularly interacts with other DC superheroes in titles such as the Justice League of America. A few, however, have a marked presence in the core Batman titles:

In more recent times, their friendship has been depicted as more uneasy, but still with a deep amount of respect.[70] In the current chronology, Batman and Superman first encounter one another early in their careers when Superman arrives in Gotham City to arrest the notorious "outlaw" known as Batman, just as Batman is investigating a murderous criminal named Magpie.[71] Superman left this encounter with Batman, believing he had the best of intentions, though disagreeing with Batman's methods. As Superman flew back to Metropolis, Batman lamented to himself that Superman was a remarkable individual and that "perhaps, in another lifetime, he might call the Man of Steel his friend."[71]
They have collaborated many times in the years since then, learning each other's secret identities, recognizing that their goals are essentially the same, and despite their frequent tense relationship, close allies and friends.[72] Superman has entrusted Lex Luthor's Kryptonite ring to Batman, as a weapon to be used against Superman in case the Man of Steel should ever be turned against the people of Earth.[73] In keeping with that attitude, Batman and Superman are often depicted as being the opposite sides of the same coin, both products of their environments, as indicated in their vastly different styles of crime fighting. Superman became a hero because he subscribed to wholesome idealism, while Batman was motivated by personal tragedy and a troubled past. Regardless, after one instance of Batman using the ring to prevent a mind-controlled Superman from wrongdoing, Superman told Batman that he knew he, "gave the ring to the right person." Batman shook his hand, and simply said, "What're friends for?"[70]

Batman comics have introduced many classic villains. His rogues gallery is one of the most identifiable in modern fiction. The Joker, Two-Face, and the Penguin are some of the most recognizable foes; other notable villains include Catwoman, the Riddler, Poison Ivy, Ra's al Ghul, Mr. Freeze, Harley Quinn, the Scarecrow, Bane, Killer Croc, the Mad Hatter, and Clayface, among others. Some of Batman's rogues gallery are notable for sometimes functioning as allies as well as villains. Some examples of this are Catwoman, the Riddler, Poison Ivy, Two-Face (Harvey Dent), Red Hood (the Joker), Anarky, and Talia al Ghul. Recently, emphasis on the psychological motivations of Batman villains have painted them in a much more sympathetic light than in their earlier stories, most notably Mr. Freeze and the Ventriloquist in their Batman: The Animated Series incarnations.

Batman has had many romantic relationships with various female characters throughout his years fighting crime. The following characters do not include the various female hangers-on that Bruce has employed to maintain his image as a playboy. 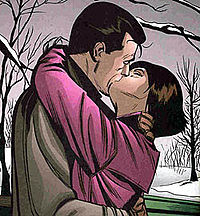 A locket Andrea Beaumont leaves in the Batcave as a keepsake for Bruce.

Several characters featured outside of modern Batman canon are of note: