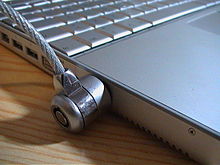 A security cable attached to a Kensington Security Slot on the side of a laptop computer.

A Kensington Security Slot (also called a K-Slot or Kensington lock) is part of an anti-theft system designed by Kensington Computer Products Group,Ltd.. It is a small, metal-reinforced, oval hole found on almost all small or portable computers and electronics equipment, particularly on expensive ones, such as laptops, computer monitors, desktop computers, gaming consoles, and video projectors. It is used for attaching a lock-and-cable apparatus, in particular those from Kensington.

Locks are generally secured in place with a key or combination lock attached to a rubberized metal cable. The end of the cable has a small loop that allows the cable to be looped around a permanent object, such as a heavy table or other similar equipment, thus securing it in place.

Kensington locks can be used in a variety of settings, generally as a deterrent to prevent opportunist theft. Individuals might use them in public places such as busy offices, coffee shops, hotel meeting rooms, and libraries. Companies may use them to secure expensive equipment that must be left in public places, such as computer displays in a retail store, or video projectors used in a hotel conference room.

Kensington locks are not designed to be an impervious protection measure.[1] Because most computer equipment cases are generally made of plastic or thin metal, the lock can be torn out, heavily damaging the case—though the proper design of a K-slot is that the lock tangs go into the metal frame of the unit. However, potential thieves trying to resell such stolen equipment would presumably be reluctant to do so as the broken Kensington lock hole implies that the equipment was taken by force.

The cable itself can be cut if a thief has a wire cutter sufficiently strong to cut through the cable material, which varies depending on the security rating of the cable. Some cables may not be readily cut with one-hand clippers, meaning that a thief would presumably look conspicuous employing two-handed cutting devices.

Several manufacturers offer similar locking mechanisms that do not require a special lock hole.[2] They attach to a popular port, such as the VGA or printer port and have special screws to secure locks in place. Others are completely electronic, and emit an alarm if they are removed from the slot. These mechanisms are more universal, but occupy one port, so they are most likely to be used when Kensington security slots are not available.