The Montana Grizzlies football program (or "Griz") represents the University of Montana in the Division I Football Championship Subdivision (FCS) of college football. The Grizzlies have competed in the Big Sky Conference, where it is a founding member, since 1963. They play their home games at Washington-Grizzly Stadium in Missoula, Montanawhere they had an average attendance of 25,448 in 2010 (2nd in FCS).[1]

The Grizzlies have had a winning season dating back to 1986 and the construction of Washington-Grizzly Stadium where they have a winning percentage of 89% including playoffs. They hold the records for most playoff appearances in a row (17), Big Sky Conference titles in a row (12), and overall playoff appearances (20). Their success made them winningest program in all college football in the 2000's (119 wins) and third winningest team in FCS in the 1990's (93 wins).[2][3]

The University of Montana's first football season was in 1897 where they won a single game (against future rival Montana State. The team played only schools from Montana until it helped found the Northwest Intercollegiate Athletic Association (NWIAA) in 1902. In addition to Montana, this original Northwest Conference included Washington, Washington State, Oregon, Oregon State, Idaho, and Whitman College. Despite the association's stated goal of increasing intercollegiate athletics, Montana continued to play only the nearest teams. More unfortunate for the team, it would not win a game against a conference opponent until a 10-0 win over Washington State 1914.

In 1915, the Northwest Conference began to become superfluous with the creation of the Pacific Coast Conference which by 1924 already included the five public Northwest Conference schools from Washington, Oregon, and Idaho in addition to California and Stanford. Montana joined the conference in 1924 and would remain until 1949. During this time, Montana would win only 9 conferences games (8 of them against Idaho), and would never play a home game against any California team.[4]

(46-40-4) Record, (9-1) vs. Cats
Doug Fessenden was the first Montana coach to last more than five years and was the first to end his career with a winning record that coached more than two years.

In 1948, the Montana board of education announced that it was de-emphasizing athletics at the state university. Key to the university's decision was the feeling that continued affiliation with the conference was incompatible with the goal to "keep intercollegiate athletics properly subordinated to the academic function" and they would "seek to develop competition in all sports with institutions similar in purpose, size, resources and academic standing." The conference was only "preferable to having no conference affiliation."[5]

In 1951, Montana joined the Mountain States Conference, popularly known as the Skyline Conference. It would compete here until the conference dissolved in 1962, never having a winning season and not winning more than three games until 1960. In 1963, Montana joined Gonzaga, Idaho, Idaho State, Weber State, and Montana State in forming the Big Sky Conference.

(51-41-1) Record, (3-6) vs. Cats
Montana's football struggles continued in the new Big Sky Conference, and the team had only won 9 games its first four years when school officials decided that coaching change was needed. In December 1966, University of Montana president Robert T. Pantzer announced that Jack Swarthout, a former quarterback/halfback/end from Montana. Swarthout brought on Jack Elway as an assistant and together they took the Grizzlies from 1-9 to 7-3 the first season. Within two years Swarthout guided the team to back-to-back undefeated regular seasons in 1969 and 1970 and Montana's first Big Sky Conference titles. Both years they were defeated by the North Dakota State in the Camellia Bowl, which was part of a set of bowls that led up to a poll to determine the NCAA College Division national football championship, prior to the current College Division playoff structure.

Continued success was expected, but a disappointing season in 1971 was followed by a work-study scandal that eventually led to Swarthout's resignation. In 1972, a federal grand jury returned a 32-count indictment charging five university officials and coaches (including Swarthout) with conspiring to illegally use federal-aid money by using some of the funds to pay for fictitious jobs for athletes.[6] Though Swarthout was found innocent, the charges hurt recruiting and the student-body government decided to withdraw financial support for athletic programs.[7][8] Despite the controversy and resultant performance decline, Swarthout is credited as being the coach that turned Montana into a winning football program.[9]

(85-36) Record, (10-0) vs. Cats
After Swarthout's departure, Montana would register only one winning season over the next 10 years. In November 1985, Montana fired coach Larry Donovan and replaced him with Portland State's head coach, Don Read. Over the next 10 years Montana would go 85-36, have 10 straight winning seasons, and was undefeated against cross-state rival Montana State. Read would win 2 conference titles, make the playoffs 5 times and win Montana's first national championship.

(39-12) Record, (4-0) vs. Cats
Mick Dennehy had been the offensive coordinator under Don Read and was promoted to head coach when Read retired in 1995. Dennehy continued Montana's success, making it to the national championship his first year for a rematch against Marshall University. This time however, Montana would lose 49-29. Montana would make the playoffs every year under Dennehy and continue to beat Montana State, but they would not make it passed the First Round of the playoffs outside his first season. After the 1999 season, Dennehy accepted a head coaching position at Utah State

(39-6) Record, (2-1) vs. Cats
The Joe Glenn era began with high hopes for the winner of two Division II champions at the University of Northern Colorado. He did not disappoint, making it to the national championship his first two seasons, winning the second. Unfortunately, during Glenn's third year Montana's win streak against Montana State finally came to end at 16 straight. Glenn left after the 2002 season to pursue the head coaching job at the University of Wyoming

Before Washington-Grizzly Stadium, the Grizzlies played off-campus at "new" Dornblaser Field from 1968-86. Prior to 1968, Montana played on-campus at "old" Dornblaser Field from 1920-67 (both named for Paul Dornblaser, football captain in 1912, killed in World War I). Prior to 1920, Montana played its home games at a field in downtown Missoula, near the former Missoulian newspaper building.

Main article: Brawl of the Wild

Montana's primary rivalry is the Brawl of the Wild (AKA: The Cat-Griz game) against Montana State University in Bozeman, played 109 times, which the Griz leads 69-36-5 (.657).

The series has three distinct periods. From 1897 to 1916 the teams didn't belong to a conference and at times would play twice per year. Early seasons had seven games or less with one season seeing the Grizzlies play just one game. Four of the five ties in the series came during this era. Montana won 12 games to Montana State's 7.

In 1917 Montana State joined the Rocky Mountain Athletic Conference and in 1924 Montana joined what is now the PAC-12 Conference when it entered the Pacific Coast Conference. The RMAC included several teams that would become Mountain West members. When MSU joined the RMAC included Colorado, Colorado State, Utah, Utah State, and Brigham Young. When UM joined the PCC included Stanford, California, UCLA, USC, Oregon, Oregon State, Washington, Washington State, and Idaho. The Bobcats remained in the RMAC through 1956, while the Grizzlies remained in the PCC through 1949 and joined the Mountain States Conference from 1951-1961. MSU was independent from 1957-1962 and UM was independent in 1950 and 1962. During this period UM enjoyed a 30-8-1 edge in Cat-Griz games.

Both schools entered the Big Sky Conference as charter members in 1963 with Montana holding a 42-15-2 series lead. From 1963 to 1985 Montana State enjoyed its most successful period of the Cat-Griz rivalry. MSU won 17 games to just six for UM. Following that Montana started "The Streak" when it won 16 straight games from 1986 to 2001. MSU ended the drought by winning three of four, while UM holds a 5-4 edge after "The Streak" with Montana State winning the most recent game 21-16 in Missoula. The Big Sky era shows Montana with a 27-21 lead.

The Grizzlies also have an annual rivalry game in conference with the Eastern Washington Eagles, called the EWU–UM Governors Cup. Montana leads the series 25-11-1 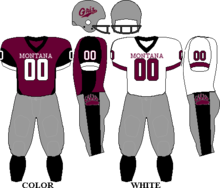 (1893-1967), (1997-Present) Maroon & Silver
(1968-1996) Copper & Gold
The University of Montana's official colors are copper, silver and gold, and were chosen as such in recognition of the state of Montana's mining history. Contrary to popular perception, these colors have never changed with the confusion stemming from the University's decision to represent "copper" with either maroon      or Texas orange      at various times in its history. In 1893 when the University was founded and its colors chosen a lack of copper dye led the school to use maroon and occasionally other colors to represent the copper. This had the effect of having the schools athletic teams not always being represented across the board by the same uniform colors. In 1967, then football coach and athletic director Jack Swarthout, who personally preferred the maroon and silver used by the football team, sought to make the schools colors more consistent and held a vote among UM coaches. They selected Texas orange (to represent copper) and gold to be used on the school's uniforms and it would remain so for the next 30 years. In 1993, the maroon was brought back as part of the University's centennial celebrations and a student survey in 1995 showed support for a return to maroon and silver uniforms. Despite some vocal opposition, by 1997 the colors began to phase into the maroon and silver that continues to be used.[10][11][12]

The #37 Jersey is a tradition began in 1987 by then Running Back Kraig Paulson. The tradition holds that whomever wears the #37 jersey selects a in-state recruit and leading defensive player to wear it next.

The Grizzlies rank among the all time playoff appearance leaders, with appearances in 1982, 1988, 1989, 1993-2009. The Grizzlies playoff streak of 17 in a row from 1993-2009 is a record at the I-AA level, now known as the NCAA Division I Championship Subdivision.[13] The streak came to an end on November 21, 2010 when the Grizzlies were not selected to the FCS playoffs following a loss to in-state rival Montana State.

On November 10, 2010 the Western Athletic Conference announced that it will be expanding its membership by adding three teams, UTSA, Texas State University, and the University of Denver. It was reported that the WAC also extended an invitation to Montana, but the university decided to decline.