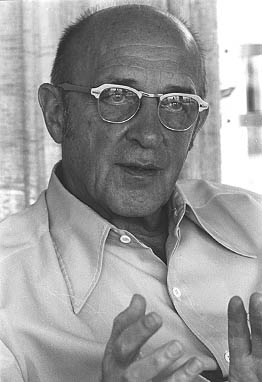 Carl Ransom Rogers (, – , ) was an influential American and among the founders of the humanistic approach to . Rogers is widely considered to be one of the founding fathers of psychotherapy research and was honored for his pioneering research with the Award for Distinguished Scientific Contributions by the in 1956. The Person-centered approach, his own unique approach to understanding personality and human relationships, found wide application in various domains such as psychotherapy and counseling (Client-centered therapy), (), organizations, and other group settings. For his professional work he was bestowed the Award for Distinguished Professional Contributions to Psychology by the APA in 1972. Towards the end of his life Carl Rogers was nominated for the for his work with national intergroup conflict in and . [ On January 28, 1987 Carl Rogers was nominated for the Nobel Peace Prize by congressman . http://www.nrogers.com/carlrogersevents.html ] In an empirical study by Haggbloom et al. (2002) using six criteria such as citations and recognition, Rogers was found to be the sixth most eminent psychologist of the 20th Century and among clinicians, second only to . [Haggbloom, S.J. et al. (2002). The 100 Most Eminent Psychologists of the 20th Century. "Review of General Psychology". Vol. 6, No. 2, 139–15. Haggbloom et al combined 3 quantitative variables: citations in professional journals, citations in textbooks, and nominations in a survey given to members of the , with 3 qualitative variables (converted to quantitative scores): (NAS) membership, (APA) President and/or recipient of the APA Distinguished Scientific Contributions Award, and surname used as an eponym. Then the list was rank ordered.]

Rogers was born on , , in Oak Park, , a suburb. His father was a and his mother was a house wife and devout Christian. Carl was the fourth of their six children.

Rogers could read by kindergarten. Following an education in a strict religious and ethical environment, he became a rather isolated, independent and disciplined person, and acquired a knowledge and an appreciation for the in a practical world. His first career choice was , at the , followed by History then . At age 20, following his 1922 trip to , China, for an international Christian conference, he started to doubt his religious convictions. To help him clarify his career choice, he attended a seminar entitled "Why am I entering the Ministry?", after which he decided to change his career.

After two years he left the to attend , obtaining an MA in 1928 and a PhD in 1931. While completing his doctoral work, he engaged in child study at the Society for the Prevention of Cruelty to Children, in , later becoming the agency's director in 1930. In 1936, Rogers invited to give a series of lectures in Rochester on Rank's new relational approach to psychotherapy. Once a close colleague of Freud's, Rank had created an interpersonal "here-and-now" therapy that strongly influenced American social workers in the 1930s. "I became infected with Rankian ideas," Rogers later said.

While Rogers was employed by the he wrote his first book, "The Clinical Treatment of the Problem Child" (1939), and its publication led to an offer of a full professorship at in 1940. In 1942, he wrote his second book, "Counseling and Psychotherapy: Newer Concepts in Practice". In it, Rogers suggested that the client, by establishing a relationship with an understanding, accepting therapist, can resolve difficulties and gain the insight necessary to restructure their life.

Then, in 1945, he was invited to set up a counseling center at the . It was while working there, in 1951, he published his major work, "Client-Centered Therapy", wherein he outlines his basic theory. In 1956 Rogers became the first President of the American Academy of Psychotherapists [ [http://www.aapweb.com/history.html American Academy of Psychotherapists History of the Academy ] ] . In 1957 he arrived at the . However, following several internal conflicts at the department of psychology at Wisconsin, Rogers became disillusioned with .

In 1964, Rogers was selected "humanist of the year" by the , and he received an offer to join the staff of the (WBSI) for research, which he accepted, and then moved to . Rogers left the WBSI to help found the Center for Studies of the Person in 1968. He remained a resident of La Jolla for the rest of his life, doing therapy, giving speeches and writing until his sudden death in 1987. Rogers' last decade was devoted to applying his theories in areas of national social conflict, and he traveled worldwide to accomplish this. In , , he brought together influential Protestants and Catholics; in , blacks and whites, in the , consumers and providers in the health field. His last trip, at age 85, was to the , where he lectured and facilitated intensive experiential workshops fostering communication and creativity. He was astonished at the numbers of Russians who knew of his work.

Together with his daughter, Natalie Rogers, between 1975 and 1980, Rogers conducted a series of residential programs in the US, Europe, and Japan, the Person-Centered Approach Workshops, which focused on cross-cultural communications, personal growth, self-empowerment, social change.

In 1987, Rogers suffered a fall that resulted in a fractured pelvis. He had a successful operation, but his heart failed the next night and he died a few days later.

The theory of Carl Rogers is considered to be humanistic and phenomenological [ Dagmar Pescitelli, [http://pandc.ca/?cat=carl_rogers&page=rogerian_theory "An Analysis of Carl Rogers' Theory of Personality"] ] . His theory is based directly on the "phenomenal field" personality theory of Combs and Snygg (1949) [Combs, Arthur W. and Snygg, Donald (1949), "Individual Behavior: A New Frame of Reference for Psychology". New York, Harper & Brothers. [http://webspace.ship.edu/cgboer/snygg&combs.html Article on Snygg and Combs' "Phenomenal Field" Theory] ] . Rogers' elaboration of his own theory is extensive. He wrote 16 books and many more journal articles describing it.

His theory (as of 1951) was based on nineteen propositions

Additionally, Rogers is known for practicing "unconditional positive regard," which is defined as accepting a person "without negative judgment of .... [a person's] basic worth." Barry, P. (2002). Mental Health and Mental Illness. (7th ed.) New York: Lippincott.

Development of the Personality

With regard to development, he described principles rather than stages. The main issue is the development of a self concept and the progress from an undifferentiated self to being fully differentiated.

Optimal development, as referred to in proposition 14, results in a certain process rather than static state. He describes this as "the good life" where the organism continually aims to fulfil their full potential. He listed characteristics of a fully functioning person (Rogers 1961

The aspect of one's being that is founded in the actualizing tendency, follows organismic valuing, needs and receives positive regard and self-regard, Rogers calls the "real self". It is the "you" that, if all goes well, you will become. On the other hand, to the extent that our society is out of sync with the actualizing tendency, and we are forced to live with conditions of worth that are out of step with organismic valuing, and receive only conditional positive regard and self-regard, we develop instead an "ideal self". By ideal, Rogers is suggesting something not real, something that is always out of our reach, the standard we cannot meet. This gap between the real self and the ideal self, the "I am" and the "I should" is called "incongruity".

Rogers describes the concepts of "congruence" and "incongruence" as important ideas in his theory. In proposition #6 he refers to the actualising tendency. The drive to become what one can be, to realise one's potential. At the same time he recognises the need for "positive regard". In a fully congruent person realising their potential is not at the expense of experiencing positive regard. They are able to lead lives that are authentic and genuine. Incongruent individuals, in their pursuit of positive regard, live lives that include falseness and do not realise their potential. Conditions put on them by those around them make it necessary for them to forego their genuine, authentic lives to meet with the approval of others. They live lives that are not true to themselves, to who they are on the inside.

He suggests that the incongruent individual who is always on the defensive and cannot be open to all experiences is not functioning ideally and may even be malfunctioning. They work hard at maintaining/protecting their self concept. Because their lives are not authentic this is a difficult task and they are under constant threat. They deploy "defense mechanisms" to achieve this. He describes two mechanisms: "distortion" and "denial". Distortion occurs when the individual perceives a threat to their self concept. They distort the perception until it fits their self concept. Denial follows the same process except instead of distorting they deny the threat exists.

This defensive behavior reduces the consciousness of the threat but not the threat itself. And so, as the threats mount, the work of protecting the self concept becomes more difficult and the individual more defensive and rigid in their self structure. If the incongruence is immoderate this process may lead the individual to a state that would typically be described as neurotic (although Rogers himself preferred to avoid labels)(Hjelle & Jiegler 1981

Rogers originally developed his theory to be the foundation for a system of therapy. He initially called this "non-directive therapy" but later replaced the term "non-directive" with the term "client-centred" and then later used the term "person-centred". The first empirical evidence of the effectiveness of the client-centered approach was published in 1941 at the Ohio State University by , using the recordings of therapeutic sessions between Carl Rogers and his clients. [Porter, E.H. (1941) The development and evaluation of a measure of counseling interview procedure. Ph. D. Dissertation, Ohio State University.] , Porter used Rogers' transcripts to devise a system to measure the degree of directiveness or non-directiveness a counselor employed. [Kirschenbaum, Howard (1979). "On Becoming Carl Rogers." pp. 206-207.] The attitude and orientation of the counselor were demonstrated to be instrumental in the decisions made by the client. [Porter, E.H. (1950) An Introduction to Therapeutic Counseling. Boston: Houghton Mifflin] [Rogers, Carl. (1951). "Client-Centered Therapy." p. 64] Even before the publication of "Client-Centered Therapy" in 1951, he believed that the principles he was describing could be applied in a variety of contexts and not just in the therapy situation. As a result he started to use the term "person-centered approach" later in his life to describe his overall theory. Person-centered therapy is the application of the person-centered approach to the therapy situation. Other applications include a theory of personality, interpersonal relations, education, nursing, cross-cultural relations and other "helping" professions and situations.

The application to education has a large robust research tradition similar to that of therapy. Rogers described the approach to education in "Client-Centered Therapy" and wrote "Freedom to Learn" devoted exclusively to the subject in 1969. "Freedom to Learn" was revised two times. The new Learner-Centered Model is similar in many regards to this classical person-centered approach to education. The application to cross-cultural relations has involved workshops in highly stressful situations and global locations including conflicts and challenges in South Africa, Central America, and Ireland. This work resulted in a nomination for Rogers.

says in his book "Against therapy" that Rogers sometimes did his research with patients living within psychiatric or other wards not taking into account their individual/social circumstances of life. dubious Fact|date=August 2008 According to Masson's judgement this has been a neglect of reality giving priority to scientific research Fact|date=August 2008; patients wanted to get out but they have been left there, their "cases" having been studied. Fact|date=August 2008

In an article on the web (http://www.culturewars.com/CultureWars/1999/rogers.html) E. Michael Jones (author of: "The Jewish Revolutionary Spirit and Its Impact on World History" "documenting" the subversive role played by organized Jewry throughout history (http://www.henrymakow.com/meditations_on_the_jewish_revo.html)) alleges that Carl Rogers' experiments led to the destruction of the Sisters of the Immaculate Heart of Mary in Los Angeles. The article concentrates on the sexual experiences of the nuns with tangential reference to Rogers and others. He provides anecdotal text, with no reference or citation. He refers to the Sisters being treated as subjects on the "Rogers’ Education Innovation Project".

In 1966, , a professor at the , developed a program he called , which was designed to simulate a psychologist asking open-ended questions. ELIZA was patterned after Rogers' approach to psychology. [Miller, Stephen, MIT Professor's Work Led Him to Preach the Evils of Computers, Wall Street Journal March15-16, 2008, p. A6]