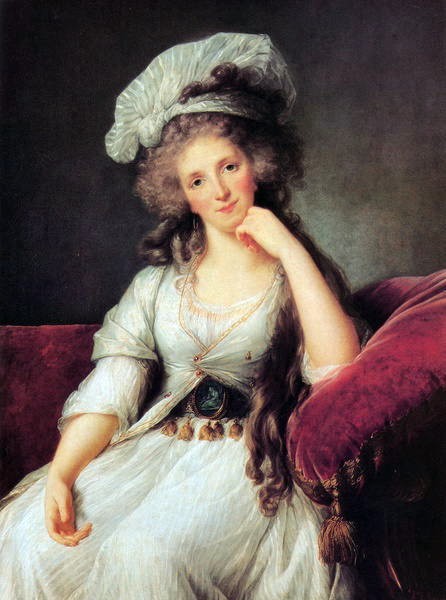 Louise "Marie Adélaïde de Bourbon-Penthièvre", duchesse d'Orléans, ( - ), wife of the so-called "royal regicide" Philippe Égalité, was the mother of France's last , Louis-Philippe I, King of the French. She was perhaps the wealthiest ess in France prior to the .

Her father was , son and heir of 's legitimised son, . Her mother was Princess Maria Theresa of Modena, a granddaughter of Philippe II, duc d'Orléans, her husband's great-grandfather. She was the last member of the family.

As a child, she was encouraged to take an active part in the charities for which her father had become known as "Prince of the Poor" [ib. G. Lenotre.] in France. His reputation for made him popular throughout the country and, subsequently, saved him during the revolution [ib. G. Lenotre] . Marie-Adélaïde was pretty, shy, and pious, and the death of her brother, the prince de Lamballe, on , left her heiress to the Bourbon-Penthièvre fortune.

Her wedding to the "duc de Chartres", heir of the , took place at the on , . Upon the death of her father-in-law Louis Philippe I, duc d'Orléans in 1785, her husband became "Louis Philippe II, duc d'Orléans", and , taking only after the immediate family of the king. As the wife of a "prince du sang" she was addressed as "Your ", a style to which her own illegitimate branch of the Bourbons had not been entitled. [Tables synchroniques de l'histoire de France, ou chronologie des princes] .

Mlle de Penthièvre brought to the already wealthy House of Orléans a of six million , an annual income of 240,000 livres (later increased to 400,000 livres), and the expectation of much more upon her father's death.

The couple had six children:

During the first few months of their marriage, the couple appeared devoted to each other but, soon, the duc de Chartres went back to the life of a "libertin" he had led before his marriage. It is during the summer of 1772, a few months after his wife had given birth to a stillborn daughter, that began Philippe’s secret liaison with one of her ladies-in-waiting, , the niece of Madame de Montesson, the wife of Philippe’s father. Passionate at first, the liaison cooled within a few months and, by the spring of 1773, was reported to be “dead” [ib. Castelot, pp. 73-80 & 86-87] . After the romantic affair was over, Félicité remained in the service of Marie-Adélaïde at the Palais-Royal, a trusted friend to both Marie-Adélaïde and Philippe. They both appreciated her intelligence and, in July 1779, she became the governess of the couple twin daughters born in 1777

It was the custom in the French royal and noble families to “turn the boys over to the men” when they were seven years old. In 1782, the young Louis-Philippe was already nine and in dire need of discipline. The duc de Chartres could not think of a man better qualified to “turn his sons over to” than… Mme de Genlis. This is how, nine years after their passionate liaison had ended and turned into deep friendship, Félicité became the “"gouverneur"” of the duc and duchesse de Chartres’ children. Teacher and pupils left the Palais-Royal and went to live in a house built specially for them on the grounds of the Bellechasse convent ("couvent des Dames de Bellechasse") in Paris, [http:::fr.wikipedia.org/wiki/Rue_de_Bellechasse] .

Félicité was an excellent teacher; however, like the Orléans family in general, and the duc de Chartres in particular, her liberal views, which she passed to her pupils, made her choose the side of the Revolution, managing in the process to alienate the children from their own mother who, on the other hand, was very conservative. Marie-Adélaïde began to contest the education given her children by her former lady-in-waiting. The relationship between the two women became unbearable and reached a point of no return when Louis-Philippe, on 2 November 1790, one month after his seventeenth birthday, joined the revolutionary "club des Jacobins". Marie-Adélaïde's relationship with her husband was also at its worst and the only way the two would “talk” to each other was through letters [ib. Castelot, pp. 206-210] .

In the memoirs of the baronne d'Oberkirch, the "duchesse d'Orléans" is described as:

"...always wearing a melancholic expression which nothing could cure. She sometimes smiled, she never laughed...."

On , Marie-Adélaïde finally left her husband [ib. Castelot, p. 213] , and went to live with her father at the "château de Bizy" [ [http://giverny.org/castles/chateaux.htm Giverny Vernon Chateau ] ] overlooking the town of Vernon [ [http://giverny.org/vernon/ Vernon France ] ] in . In September 1792, having joined the new régime, the duc d'Orléans was elected to the under the name "Philippe Égalité". He had chosen the side of the Mountain ("La Montagne"), which made him from the very beginning a suspect in the eyes of the ("Girondins") who wanted all the Bourbons, including the d'Orléans family, to be banished out of France. Their fate was sealed when the duc de Chartres, "Général Égalité" in the Army of the North commanded by Dumouriez, passed to the side of the Austrians in March 1793. The result was the arrest, on April 6, of all the members of the Orléans family still in France.

After their arrest in Paris, Philippe Égalité and his son, the comte de Beaujolais, first imprisoned in the Abbey prison ("prison de l'Abbaye") in Paris [ib. Castelot, pp. 273-274] , [http:::fr.wikipedia.org/wiki/Prison_de_l%27Abbaye] , were transferred to the prison of Fort Saint-Jean in where they were soon joined by the duc de Montpensier who had been arrested while serving as an officer in the Army of the Alps. The day before his father and brothers were arrested in France, the duc de Chartres had rushed to , a town in today's Belgium, near the French border [Tournai, wihin the Netherlands, which had become Austrian territory at the Treaty of Utrecht in 1713, was occupied by French troops since 1792.] , where his sister Adélaïde and Mme de Genlis had been living since Philippe Égalité had made them emigrate in November 1792. The duc de Chartres brought them to safety in [ib. Castelot, p. 271.] . In the meantime, because of her poor health, Marie-Adélaïde was allowed to stay, under guard, at the château de Bizy, where her father had died one month earlier, on March 4. Her inheritance was confiscated by the revolutionary government.

Despite having voted for the death of his cousin , and having denounced his son's , Philippe Égalité was d on , .

Upon the execution of her husband, Marie-Adélaïde, now known as "Veuve Égalité" (Widow "Égalité"), was incarcerated at the , which had been transformed into a prison during the Revolution. There she met the man who was to become the "love of her life", a former member of the named [Étienne Léon de La Mothe-Langon, Jean Théodore Laurent-Gousse, "Biographie toulousaine, ou Dictionnaire historique des personnages qui, par des vertus, des talens, des écrits, de grandes actions, des fondations utiles, des opinions singulières, des erreurs, etc. se sont rendus célèbres dans la ville de Toulouse, ou qui ont contribué à son illustration", Paris, Chez L. G. Michaud, 1823, tome 2, [http://books.google.fr/books?id=5yEIAAAAQAAJ&pg=PA271&lpg=PA271&dq=coll%C3%A8ge+de+l'Esquille+Toulouse&source=web&ots=DiVN4VNCPi&sig=7IcUhTPOMB6Ro-CNtCajfe0TS48&hl=fr#PPA338,M1 p. 338-343] ] , who had been imprisoned at the fall of the "Girondins". Nearly executed before the fall of Robespierre, in July 1794 at the end of the Terror [http:;;fr.wikipedia.org/wiki/Conspiration_des_prisons] , she was then transferred to the "", a former mental institution that had been turned into a "prison for the rich" during the Revolution [Claude Dufresne, "Les Orléans", Criterion, Paris, 1991, p. 314.] . After Rouzet, who after his liberation had become a member of the , succeeded, in 1796, to secure her liberation and that of her two sons still imprisoned in Marseille [Upon their liberation, Montpensier and Beaujolais joined their brother Chartres in the United States where they traveled until sailing for England where they landed in January 1800. (ib. Dufresne, p. 325-326)] , the two never left each other and lived together in Paris until 1797, when a decree banished the remaining members of the from France. Marie-Adélaïde was sent to Spain, as was her sister-in-law , the last "princesse de Condé". Rouzet accompanied them to the Spanish border and managed to secretly join them in Barcelona where he became her chancellor and she obtained for him the title of "comte de Folmont"

Marie-Adélaïde, Rouzet and the Orléans exiled in Spain returned to France in 1814 at the time of the first . After legal battles which lasted until her death, the bulk of her inheritance was eventually recovered. Her last years were embittered by disputes with her children over money.Fact|date=May 2008 She died in her castle at Ivry-sur-Seine [Ivry-sur-Seine, a former village a little over 5 km south of the center of Paris, is now a suburb of the French capital.] on , after having suffered terribly from breast cancer. Rouzet had died nine months before, on , , and she had him inhumed in the new family chapel she had built in Dreux in 1816, as the final resting place for the two families, Bourbon-Penthièvre and Orléans. [Adolphe Robert, Gaston Cougny, "Dictionnaire des parlementaires français de 1789 à 1889", Paris, Bourloton, 1889, tome 5, [http://www.assemblee-nationale.fr/histoire/biographies/1789-1889/Tome_5/ROUSSIN_ROYER.pdf de Roussin à Royer] , p. 216-217] , . The original Bourbon-Penthièvre family crypt in the Collégiale de Saint-Etienne de Dreux had been violated during the and the bodies thrown together into a grave in the "Chanoines" cemetery of the "Collégiale". She also was buried in the new chapel which, after the accession to the throne of her son Louis-Philippe, was renamed "Chapelle royale de Dreux" and became the for the royal Orléans family.

She did not live to see Louis-Philippe, become King of the French in 1830.

On the eve of the , in 1789, Louise Marie Adélaïde was painted by , the favourite portrait painter of Queen . The painting, illustrated at the top of this page, was titled "Madame la Duchesse d'Orléans". Vigée-Le Brun made use of the lonely duchesse's well-known in the pose. Dressed in virginal white, a reminder of her candor, the head of the duchesse is supported on her upraised arm. She is shown with a languid, sad expression. Below the breast is a medallion which Colin Eisler has identified as "Poor Maria", possibly a reference to the life of the duchesse, which was later destroyed because of the revolution. The painting is now at the . There is another copy in the "musée de Longchamp", . Versailles also has a third copy which has been incorrectly described as a .