Dutch-Bangla Bank Limited (the Bank, DBBL) is a scheduled joint venture commercial bank between local Bangladeshi parties spearheaded by M Sahabuddin Ahmed (Founder & Chairman) and the Dutch company FMO. DBBL was established under the Bank Companies Act 1991 and incorporated as a public limited company under the Companies Act 1994 in Bangladesh with the primary objective to carry on all kinds of banking business in Bangladesh. DBBL commenced formal operation from June 3, 1996. The Bank is listed with the Dhaka Stock Exchange Limited and Chittagong Stock Exchange Limited.

DBBL is most widely recognized for its donations to social causes and its IT investment (largest ATM network). However it has recently[when?] stated that it will stop expansion on its ATM network as the current numbers have exceeded demand and hence diminishing returns (if any). Although it is widely believed it is a loss-making/subsidized unit which DBBL rationalizes as quasi CSR. 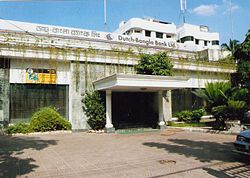 After instability and frequent management changes in its initial years, DBBL overcame these obstacles to establish rapid growth since the year 2000. The bank grew its reputation through social work rather than profits. The bank's conservative nature, long-term strategies, hefty social donations and technology investments have always led to modest but steady profits. DBBL has been known to be overly conservative in its banking practices. Much of the success and strategy has been attributed to the leadership of the founder chairman, M Sahabuddin Ahmed.

Despite being the largest corporate donor in Bangladesh, investor confidence was unhindered. In March 2008, DBBL share prices reached Tk. 14325.80 in the Dhaka Stock Exchange, setting the record for the highest stock price in the history of Bangladesh. It is also one of the few banks that does not participate in merchant/investment banking (which can lead to sporadic growth).

Dutch Bangla Bank is noted to be the first and only local bank in Bangladesh to have an automated banking system. The bank has spent over BDT 2 Billion in automation upgrades (first bank in Bangladesh to do so). This automation took place in 2003 whereby services of the bank were available uniformly though any branch, ATM and internet. Banking was a paper based until DBBL, with its wide local network, delivered banking automation and modern banking services to the masses. This effectively introduced the 'plastic money' concept into the Bangladeshi society. The entire automation system was imported and is the most expensive banking related IT project in Bangladesh.

The ATM count stood at 140 eclipsing other networks by a large margin. This rapid increase in DBBL's ATM network has led the majority of other banks to sign sharing agreements instead of pursuing their own ATM network.

In 2006, Dutch Bangla Bank ventured into the realm of personal credit by offering automatic credit facilities to its Debit card (DBBL Nexus) holders. It also continued expanding its ATM network with the intention of installing more than 400 machines, even though it is widely believed that the ATM division will not break even and is a setback to the profit margins.

In 2007 the bank entered a strategic alliance with Citibank NA, where both parties will provide retail banking services of DBBL for its employees and owners of Citibank corporate customers in Bangladesh. In the same year DBBL became the first bank in Bangladesh to offer SMS Banking services.

DBBL maintained a proprietary policy on its ATM network until 2007. This was changed when DBBL and Standard Chartered Bank (SCB) signed an agreement that will let SCB use DBBL's ATM network. Thus ending the unhealthy competition between the organizations. This sharing invitation was extended to all other banks shortly after. Number of DBBL ATMs eclipsed the 200 mark.

In 2010 most sharing agreements with foreign banks have been abruptly rendered invalid due Visa card's new policies enforced upon DBBL. In response to Visa's decision to terminate its ATM facilities with DBBL, Unionpay approached DBBL to convert all the retail network to accept Unionpay cards. DBBL and Unionpay have decided for a major nationwide launch to make Unionpay the single largest card issuer in Bangladesh. 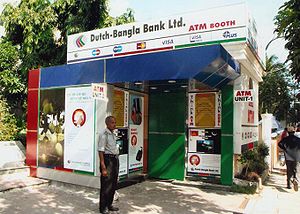 DBBL maintains its own network and automation without the involvement/assistance of any third party companies. Access to ATM services are free for DBBL clients. Partner banks are charged a subsidized Tk. 10, although the end price for the customer may be higher due to the extra charges levied by the partner bank.

DBBL has over 870 ATM's installed all over Bangladesh, making it the largest network by a large margin. In 2009 DBBL announced the biggest its biggest expansion goal for its network. The total number of ATMs will be 850 by the end of 2009 to cater the needs of customers at their doorsteps.[1] It also hinted that this may be the last ATM expansion due to the increasing costs of subsidizing such a system, but clearly stated that it has no intention of introducing any charges.

On the digital day (10/10/10), the DBBL inaugurated its (digital) 1000th ATM at the factory premises of the GlaxoSmithKline, Chittagong.

Banks that have signed agreements to share DBBL's ATM network (as of May 2009):

However the ATMs are remaining non-functional frequently due to its over expansion in network which is making the system over burdened beyond its actual capacity.

During the Q1 of 2010, Dutch Bangla Bank Ltd. introduced "Fast Track" in the country. Fast Track is first of its kind in the country that is like a mini branch. Along with the generic ATM withdrawal service, it lets the customer deposit small amounts of money to DBBL account! The limit is currently 20,000 BDT. Moreover, the Fast Track also provides account opening service and loan information.[2][unreliable source?] As on 10 October 2010, DBBL has installed 50 number of Fast Tracks in Dhaka, Chittagong and Sylhet cities.

On 3 June 2010, Dutch Bangla Bank Ltd. announced to allow internet payments system. Using their Internet Payment Gateway merchants will be able to charge their customers' Visa, Masters, DBBL Nexus and Maestro cards. This is going to be revolutionize the [e-commerce] in Bangladesh! [3]

Any Visa/MasterCard cardholder (local or overseas) can use their cards to pay at a number of e-Merchants against their purchase of goods. They can also pay DESCO electricity bills. DBBL is working with airlines, railways, utility companies, educational institutions, and stock exchanges for facilitating purchase of tickets, payment of bills/fees and IPO subscription through the Internet Payment Gateway. It is also working to make an interface with PayPal. Once everything is in operation, this will change the payment mechanism in Bangladesh and will reduce public sufferings and tensions.

Dutch Bangla Bank supports social work extensively and is one of the largest private donors in Bangladesh. Under the vision of M Sahabuddin Ahmed, the bank contributes extensively through its foundation Dutch Bangla Bank Foundation. This has been one of the biggest priority for the bank since its inception. As a result the organization has been granted numerous national and international awards for its role in the development of Bangladesh. The Dutch-Bangla Bank Foundation was established under the vision of its founder chairman, M Sahabuddin Ahmed, in order to help the people of Bangladesh. DBBL is the largest corporate donor in Bangladesh with total donations exceeding BDT 1.3 billion.

In 2007, the bank won the Bangladesh Business Awards for being the 'Best Financial Institution' mainly for its commitment to technology and community service. In 2007 alone, DBBL donated BDT 220 million towards social causes.

In 2008, DBBL announced a donation of Tk 100 million to fund the construction of a 11 storey research center, titled "Dutch-Bangla Bank Research Centre for Advanced Research in Arts and Social Sciences" at the Dhaka University campus in Dhaka, Bangladesh. It was Dhaka University's largest ever donation from a private company. The research center, which would be the first of its kind in Bangladesh, will be supervised by renowned teachers, scholars and researchers. It will also award scholarship to researchers and scholars at home and abroad.

In February 2011, it was announced that local sponsoring shareholders will not be receiving dividends to "achieve greater things". In May 2011, DBBL announced the largest scholarship program in Bangladesh where DBBL would have to donate Tk 102 crore every year. DBBL was already the single largest corporate donor in Bangladesh and this new announcement had surprised many, especially because it came from such a small bank. The structure of this scholarship had greatly benefited students who had the academic performance, but required the financial aid.

Corresponding this announcement, DBBL published the first group of awardees in a 10-page advertisement spread in multiple newspapers. The recipients were awarded in a ceremony where the stadium being used was not big enough to hold all the guests. Speakers at this event greatly thanked DBBL's founder chairman, M Sahabuddin Ahmed, for his vision and dedication in creating opportunities for students.

Dutch-Bangla Bank Limited (DBBL) has for the first time introduced its mobile banking service, expanding the banking service from cities to remote areas.[4] Bangladesh Bank Governor Atiur Rahman inaugurated the service in July, 2011 by depositing Tk 2,000 and withdrawing Tk 1,500 through Banglalink and Citycell mobile networks in Motijheel area. Bangladesh Bank has already allowed 10 banks to initiate mobile banking. Of them DBBL kicked off first. "Mobile banking is an alternative to the traditional banking through which banking service can be reached at the doorsteps of the deprived section of the society,” the central bank governor said at an inaugural press briefing at Hotel Purbani. Atiur Rahman said through mobile banking various banking services including depositing and withdrawing money, payment of utility bills and reaching remittance to the recipient would be possible. By going to the DBBL-approved Citycell and Banglalink agents throughout the country, the subscribers can open an account provided they show the necessary papers and pay a fee of Tk 10. To use the banking service, subscribers must own a cell phone from any provider. The bank gives subscribers a four-digit PIN. By using the PIN, subscribers can use a number of banking services, including depositing and withdrawing money, while maintaining account security. Customers may hand over cash to agents in the bank's network, and agents can coordinate the transaction from their mobile phones, helping account holders securely complete banking tasks using their PINs. Customers can deposit or withdraw money up to five times per day, up to Tk 5,000 per day. One percent of the transaction account or Tk 5, whichever is greater, will be deducted as a cash-in charge. The charge for cash-out is 2 percent of the transaction amount or Tk 10, whichever is greater. There are no fees for registration, salary or remittance disbursement services.