Botevgrad and its hinterland are located in an elliptical valley with a total area of 5,066 km². The municipality covers parts of the Western Stara Planina mountain — Razhana, Murgash, Bilo and Golyama Planina and some parts of the Northern Balkan. Vitinya Pass connecting Northern Bulgaria with Southern Bulgaria and the proximity of the capital contribute to its strategic location. Botevgrad municipality borders the following municipalities: Pravets, Etropole, Gorna Malina, Elin Pelin, Svoge, Mezdra and Roman. 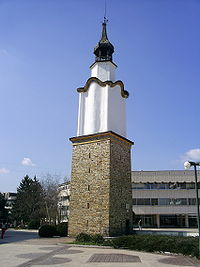 The region of Botevgrad municipality is quite rich in natural resources. The relief is remarkable for its variety. The municipality covers the following geographic parts: a part of Botevgradska Kotlovina (the valley of Botevgrad), some parts of Botevgradski Predbalkan and four of the Balkan shoulders — Razhana, Golyama Planina, Murgash and Bilo. Kotlovinata Zhleba (Fillet Hollow) is situated between the main Balkan Range and the Northern Balkan.

The bottom of the hollow is the acumulative river terrace of Bebresh river and its tributaries. The low oval hills inside the hollow contribute to the countryside variety. Mount Murgash — 1687 m tall is the highest point of the highest mountain range to the south and south-west. Many rivulets run down the slopes of the heights. Prohoda Vitinya or Vitinya Pass connecting South Bulgaria with North Bulgaria is located on the territory of Botevgrad municipality.

The EPIQ group, which specialises in the design and production of added value electronics and electromechanical systems used in the automotive and consumer electronics industry, operates two production plants in the town. The Bulgarian division of EPIQ accounts for 70 percent of the group's turnover.

GE Pharmaceuticals operates a drugs factory and in 2006 Siemens opened a plant for the production of high voltage transformers.

Botevgrad is twinned with: