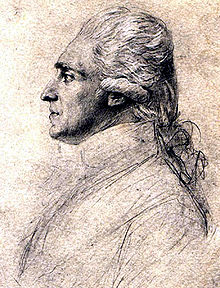 Marshal of France Jean-Baptiste Donatien de Vimeur, comte de Rochambeau (French pronunciation: [ʁɔʃɑ̃bo]; 1 July 1725 – 10 May 1807) was a French nobleman and general who participated in the American Revolutionary War as the commander-in-chief of the French Expeditionary Force which came to help the American Continental Army. During the French Revolution, he commanded the Armée du Nord, but was arrested during the Reign of Terror and narrowly escaped the guillotine.

Rochambeau was born in Vendôme, Loir-et-Cher. He was schooled at the Jesuit college in Blois. However, after the death of his elder brother, he entered a cavalry regiment, and served in Bohemia, Bavaria, and on the Rhine, during the War of the Austrian Succession. In 1747 he had attained the rank of colonel.

He took part in the siege of Maastricht in 1748 and became governor of Vendôme in 1749. After distinguishing himself in 1756 in the Battle of Minorca on the outbreak of the Seven Years' War, he was promoted to Brigadier General of infantry. In 1758, he fought in Germany, notably in the battles of Krefeld and Clostercamp, receiving several wounds during the latter. 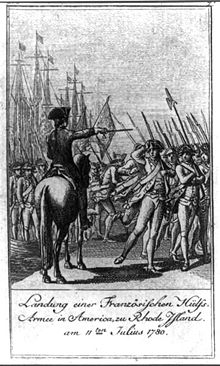 Landing of a French auxiliary army in Newport, Rhode Island on 11 July 1780, under the command of the comte de Rochambeau. This image, one of 12 scenes from the American Revolution printed in Allegemeines historisches Taschenbuch, was by Daniel Nickolaus Chodowiecki, a well-known Polish engraver. The John Carter Brown Library at Brown University had acquired the book by 1870.

NPS map of the W3R Route Bataille de Yorktown by Auguste Couder. Rochambeau and Washington giving their last orders before the battle.

Surrender of Cornwallis at Yorktown by John Trumbull, depicting Cornwallis surrendering to the French troops of Rochambeau (left) and American troops of Washington (right). Oil on canvas, 1820.

In 1780, Rochambeau was appointed commander of land forces as part of the project code named Expédition Particulière.[1] He was given the rank of Lieutenant General in command of some 7,000 French troops and sent to join the Continental Army, under George Washington in the American Revolutionary War Rochambeau commanded more troops than did Washington. Count Axel von Fersen the Younger served as Rochambeau's aide-de-camp and interpreter. The small size of the force at his disposal made him initially reluctant to lead the expedition.[2]

He landed at Newport, Rhode Island, on 10 July, but was held there inactive for a year, owing to his reluctance to abandon the French fleet blockaded by the British in Narragansett Bay. Brown University, then named the College in the Colony of Rhode Island and Providence Plantations, served as an encampment site for some of Rochambeau's troops, and the College Edifice, now known as University Hall, was converted into a military hospital.[3] In July 1781, Rochambeau's force left Rhode Island, marching across Connecticut to join Washington on the Hudson River at Dobbs Ferry, New York. From July 6 to August 18, 1781, the Odell farm served as Rochambeau's headquarters.[4] There then followed the celebrated march of the combined forces, the siege of Yorktown and the Battle of the Chesapeake. On 22 September, they combined with Marquis de Lafayette's troops and forced Lord Cornwallis to surrender on 19 October. In recognition of his services, the Congress of the Confederation presented him with two cannons taken from the British. These guns, with which Rochambeau returned to Vendôme, were requisitioned in 1792.

He was an original member of The Society of the Cincinnati.

Upon his return to France, he was honored by King Louis XVI and was made governor of Picardy, a historical province in the north of France.

During the French Revolution, he commanded the Armée du Nord (the military of France) during the period between the fall of the Ancien Régime under Louis XVI in 1792 and the formation of the First French Empire under Napoleon Bonaparte in 1804, and created Marshal of France on 28 December 1791, but resigned in 1792 after several reverses. Despite being sympathetic to the National Assembly, Rochambeau was arrested during the Reign of Terror, a period of violence that occurred after the onset of the French Revolution, and narrowly escaped the guillotine. He was subsequently pensioned by Napoleon Bonaparte and died at Thoré-la-Rochette during the First French Empire.[5]

A statue of Rochambeau by Ferdinand Hamar was unveiled in Lafayette Square in Washington, D.C., by President Theodore Roosevelt on 24 May 1902, as a gift from France to the United States. The ceremony was made the occasion of a great demonstration of friendship between the two nations. France was represented by ambassador Jules Cambon, Admiral Fournier and General Henri Brugère, as well as a detachment of sailors and marines from the battleship Gaulois. Representatives of the Lafayette and Rochambeau families also attended. A Rochambeau fête was held simultaneously in Paris.

In 1934, American A. Kingsley Macomber donated a statue of General Rochambeau to the city of Newport, Rhode Island. The sculpture is a replica of a statue in Paris. It was from Newport that General Rochambeau departed with his army to join General Washington to march on to the Siege of Yorktown. [2]

The French Navy gave his name to the ironclad frigate Rochambeau.

The USS Rochambeau was a transport ship that saw service in the United States Navy during World War II.

On Monday, 30 March 2009, U.S. President Barack Obama signed into law the Omnibus Public Land Management Act, one of whose provisions is to designate the Washington-Rochambeau Revolutionary Route as a National Historic Trail.

Rochambeau's memoirs, Mémoires militaires, historiques et politiques, de Rochambeau were published by Jean-Charles-Julien Luce de Lancival in 1809. Of the first volume, a part that was translated by M.W.E. Wright into the English Language was published in 1838 under the title of Memoirs of the Marshal Count de R. relative to the War of Independence in the United States. 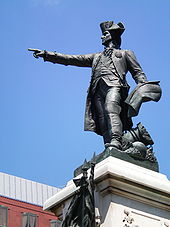 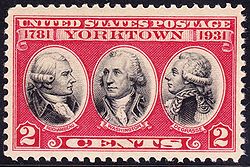