Chrysler Slant-6 engine
This article is about the automobile engine. For the punk rock band, see Slant 6.

The Slant-6, known within Chrysler as the G-engine, is one of Chrysler's better known automobile engines. The engine is an inline-6 piston engine specifically designed such that the cylinders are inclined at a 30-degree angle from vertical. The 30° inclination of the Slant-6 gave a lower height overall engine package, which enabled vehicle stylists to lower hoodlines, and also made room for the water pump to be mounted with a significant lateral offset, significantly shortening the engine's overall length. In addition, the slanted cylinder block provided ample space under the hood for intake and exhaust manifolds with runners of longer and more nearly equal length compared to the "rake" or "log" style manifolds found on other inline engines. These manifolds give a more even cylinder-to-cylinder fuel distribution and are less restrictive for better airflow through the engine.

The G-engine was offered in various configurations in the North American market until 1983 in cars, 1987 in trucks, and 1991 for marine, agricultural and industrial use. Replacement engines were still being built in Mexico as of 2000. In addition, the G-engine was used extensively by worldwide Chrysler divisions and subsidiaries in their locally produced vehicles. It was also widely purchased by other original equipment manufacturers for installation in commercial vehicles, agricultural and industrial equipment, and boats.

The G-engine gained an enviable reputation for reliability and nearly unstoppable durability. The basic engine design incorporates much heavy-duty engineering, in part because the engine was designed from the start to be made of either iron or aluminum: The block is of a deep-skirt design, with the crankshaft axis well above the oil pan rails for structural rigidity. Although only four main bearings are used, they are of the same dimensions as those in the Hemi. Very efficient cooling and lubrication systems, a favorable rod ratio, and an extremely strong forged steel crankshaft (on engines made through mid-1976) all contributed to the engine's apparent indestructibility. In addition, the G-engine also provided better performance than most of its competition in the 1960s and 1970s. By the 1980s, the G-engine had been effectively strangled by continual addition of increasingly restrictive exhaust emission control devices, without upgrades to the combustion chamber design, piston displacement or induction system, all of which were by that time quite antiquated. G-engine use in passenger cars was rapidly phased out in the early 1980s as Chrysler Corporation shifted to front wheel drive architecture.

The 198 was introduced in the North American market for model year 1970 as a more powerful base-model engine than the previous 170 engine. The increased displacement gave improved vehicle performance and lower manufacturing cost, for it was achieved with the tall RG block also used with the 225 engine by installing a crankshaft with 3.64 in (92.5 mm) stroke and connecting rods 7.006 in (178.0 mm) long, for an actual displacement of 198.3 cu in (3.2 L). In this manner, manufacturing costs were eliminated that had been caused by previously using two different blocks for the two different available sizes of slant-6 engine. The 198 engine was available through the 1974 model year.

The 225 used the RG (tall) block with a 3.40 in (86.4 mm) bore, a 4.125 in (104.8 mm) stroke, and 6.699 in (170.2 mm) connecting rods, for an actual displacement of 224.7 cu in (3.7 L). This undersquare geometry was a departure from the emerging trend towards oversquare engines, and gave the 225 exceptionally strong low-RPM torque characteristics. The large amount of torque available at low engine speeds caused the 225 to find favor not only as a responsive and driveable passenger car engine, but also in pickup and commercial trucks, school buses, motorhomes, forklifts, harvesters, swathers from the likes of John Deere and Massey-Ferguson, airplane tugs, and powerboats. The 225 was originally designed and introduced in 1960 for use in full-size models, and it eventually became the best known of the Slant Six engines.

Most G-engines were equipped with small-capacity carburetors and exhaust systems adequate for standard passenger car usage at low altitudes, but which tended to hamper maximum available performance at high altitudes, in heavy or race-purpose vehicles and/or where quicker acceleration was desired. To meet the demand for improved responsiveness, modified engine configurations were made available in various markets over the years. 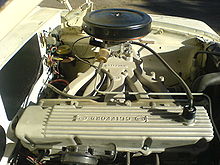 a reproduction Hyper-Pak intake on a slant-6 engine

The Hyper Pak was a parts package made available from 1960 through 1962 at Chrysler Corporation dealer parts counters. The parts were made available to comply with the regulations of sanctioning bodies for racing events in which Valiants had been entered by factory-backed teams: All parts used had to be "stock" parts, the definition of which meant that they were available through normal factory parts channels. The Hyper Pak consisted of a very-long-ram intake manifold meant to accept a Carter AFB 4-barrel carburetor, the AFB carburetor itself and an appropriate air cleaner, dual (front-3 and rear-3) cast iron exhaust headers, a large-diameter exhaust Y-pipe to connect to these dual cast iron headers, a larger muffler, a 276°-duration camshaft with appropriate valve springs and pushrods, a heavier-duty clutch, a manual choke control, a starter motor modification template and, in the full-race version of the package, high-compression pistons designed to increase the engine's compression ratio to 10.5 from the stock 8.5. The Hyper Pak was recommended for installation only on vehicles equipped with manual transmissions, for the camshaft was of such characteristics that a high idle speed was required to prevent engine stall-out. The Hyper Pak was primarily intended for competition driving, its road manners involving rough idling and poor cold-engine driveability, a high power band and poor fuel economy. But, in competition events, it proved unbeatable. Eight factory-backed Valiants entered the 1960 NASCAR compact car race at Daytona Beach, and humbled the competition; the Valiants came in first through eighth. After a similar performance the following year, the race was dropped. A high-fidelity reproduction of the Hyper Pak intake manifold was created by noted Slant-6 builder Doug Dutra in the late 1990s; subsequently the tooling was sold to a marketer of performance equipment for inline six-cylinder engines.

For the 1965-1968 model years, Chrysler Argentina equipped Valiant GT models with a system of dual 1-barrel carburetors and other engine specification changes. Claimed output was 180 bhp (130 kW), compared to the single-carburetor version of the engine producing 145 bhp (108 kW) 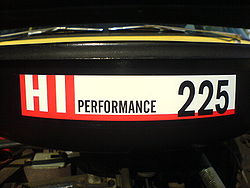 For the 1967 model year, a 2-barrel carburetor setup was released for export production. This configuration, similar to that found on marine G-engines beginning in 1965, consisted of an iron intake manifold with open-plenum 2-barrel carburetor mounting pad, a Carter BBD carburetor, and associated air cleaner, linkage and plumbing changes. Also installed on these export 2-barrel engines was a slightly hotter camshaft (244° duration rather than 240°), and a distributor with modified advance curves. This engine, rated at 160 bhp (120 kW), was popular in Central and South America, South Africa, Australia and New Zealand. Driveability characteristics were generally superior to those of the 1-barrel engine, but to avoid cutting into sales of the more expensive V8 engine, this 2-barrel setup was not offered in the North American market. Of particular note is the automatic choke design found in this export 2-barrel setup. Most Chrysler products used remote automatic chokes, with a bimetal coil spring mounted on the exhaust manifold, exposed to exhaust heat and operating a pushrod which rotated the choke lever on the carburetor. The export 2-barrel setup used an integral heat-tube style automatic choke: Air heated by the exhaust manifold was routed to a round bakelite housing on the carburetor air horn, which contained a bimetal spring acting directly on the choke lever.

By the mid 1970s in the North American market, emission control regulations were reducing engine performance at the same time as safety regulations were making cars heavier. An increase in performance was required for the G-engine, so a 2-barrel setup was released for the 1976 model year. This was not the same as the export 2-barrel package described above; the intake manifold used a throttle-bored plenum rather than an open one, and had provisions for an EGR valve. The carburetor, a Carter BBD similar but not identical to the one used on Chrysler's 318 V8 engine, used a standard Chrysler-style remote automatic choke. A 2¼-inch exhaust headpipe was also provided, as well as 2-barrel-specific advance curves in the ignition distributor. This package, called "Super Six" by the marketing division, added between 10 and 15% to the engine's horsepower and significantly improved throttle response and driveability while maintaining compliance with emission laws. 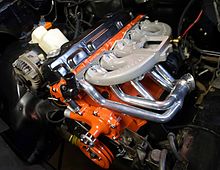 A Slant-6 with aftermarket performance parts

Many companies have provided aftermarket performance equipment for the G-engine through the years.