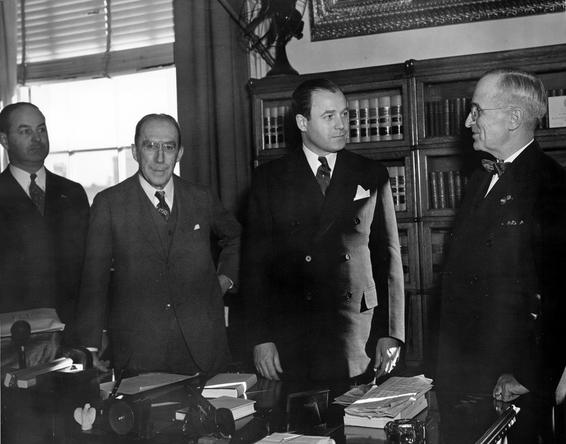 James Howard McGrath ( – ) was an American politician and from the of .

McGrath, a Democrat, served as U.S. Attorney for Rhode Island before becoming Governor, U.S. Solicitor General, U.S. Senator, chairman of the and Attorney General of the United States.

From 1940 until 1945, he was , reorganizing the juvenile court system while sponsoring a workers' compensation fund and a labor relations board, but he resigned in the middle of his third term to accept appointment as (1945-46).

McGrath was elected as a Democrat to the from Rhode Island in 1946, joining an (1947-49) that had unaccustomed Republican majorities in both houses. He was briefly chairman of the for the (to which the 1948 election had returned Democratic majorities). In the Senate, McGrath opposed reducing wartime economic controls and taxes, wishing to spend the latter instead on Social Security, national health insurance and education. [http://www.answers.com/topic/j-howard-mcgrath "J. Howard McGrath" in "West's Encyclopedia of American Law" (1998)]

He was chairman of the from 1947 to 1949. In managing President 's successful 1948 election campaign, McGrath alienated white Southerners but won over crucial black constituencies by integrating the Democratic national headquarters staff. [http://www.answers.com/topic/j-howard-mcgrath "J. Howard McGrath" in "West's Encyclopedia of American Law" (1998)]

President Truman appointed Sen. McGrath on , . He resigned on , , after he had refused to cooperate in a corruption investigation initiated by his own department. Truman asked for and received McGrath's resignation. [Marcus, "Truman and the Steel Seizure Case: The Limits of Presidential Power," 1977, p. 35-36.]

McGrath entered the private practice of law in , and Providence. In 1960, he was an unsuccessful candidate to succeed the retiring U.S. Sen. (Democrat of Rhode Island), losing the Democratic primary (also contested by former Gov. ) to .

* [http://bioguide.congress.gov/scripts/biodisplay.pl?index=M000456 Biographical Directory of the United States Congress]
* [http://www.nga.org/portal/site/nga/menuitem.29fab9fb4add37305ddcbeeb501010a0/ National Governors Association]
* [http://www.answers.com/topic/j-howard-mcgrath West's Encycylopedia of American Law at Answers.com] , provides more details than the other sources, especially about McGrath's early life, his commitment to civil rights and the financial scandals that touched him.