The Morgan Plus 8 is a sports car built by British car makers Morgan between 1968 and 2004. Its instant and enduring popularity has been credited with saving the company and keeping the company famous during the 36 years of its manufacture. Among Morgan enthusiasts, it is deeply associated with Peter Morgan, the owner-chairman behind its design.

Morgan Plus 8, pictured in London

To mark the 35th year of production of its Plus 8, MMC released a commemorative 'Anniversary Edition'.

All Plus 8s engines were based on the Buick 215 which had been bought by Rover. Morgan was the first of a succession of sports car makers- including the likes of TVR and Marcos- to use the engine, which Rover had only just made available in the P5B saloon.[2]

In 1996, a 4.6 L version found its way into the car as an option, still using the 14CUX system. From 2000, all Morgan Plus 8s were fueled by the GEMS system used on the Land Rover Discovery II.

For almost two decades during the 1950s and 1960s, North America took the greater bulk of Morgan production. Popularity in the UK and Europe had greatly fallen during that era. The era ended with the advent of the strong emission and structural laws. Luckily, the failure of the modern looking +4+ and the arrival of the powerful Plus 8 rekindled interest in the home market in the whole line.

In the US, a way was found to keep importing Morgans after 1974. From 1974 to 1992, all imported Morgans (of which 98% were Plus 8s) to the United States were converted by independent dealers, especially Bill Fink, to run on propane as fuel to pass the U.S. emissions regulations.[3][4][5]

When the Rover Group re-certified their V-8 engine for use in the Range Rover SUV sold in the U.S., Morgan made a gasoline-powered +8 available with the same engine in the same tune and with the same anti-emission devices.[citation needed] As safety regulations continue to change, Morgan was again challenged in 2006 to meet the new structural requirements announced by the NHTSA in 2000. A request for an exemption to the law on airbags was refused and the importation of traditional (classic) Morgans ceased.[6] 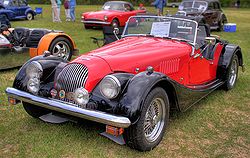