CSKA won the 2005 UEFA Cup by beating Sporting Clube de Portugal 3–1 in the Final at the Estádio José Alvalade in Lisbon. It became the first Russian club to win a major European title, as well as the first one to complete a treble.

On 16 March 2010, CSKA qualified for the quarterfinals of the UEFA Champions League after defeating Sevilla 3–2 on aggregate.

Originally, CSKA was nicknamed Horses, presumably because their first training facilities were located in the building that previously was Prince Yusupov's stable.[1] It was considered offensive, but later it was transformed into The Horses, and currently this nickname is used by players and fans as the name, along with other variants such as Army Men (Russian: армейцы) and Red-Blues (Russian: красно-синие ). 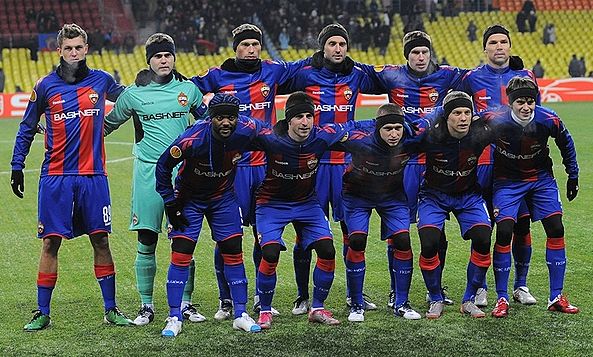 Previous names of the club

CSKA has its own stadium called "Light-Athletic Football Complex CSKA" and abbreviated as LFK CSKA. Its capacity is very small for a club of its stature; no more than 4,600 spectators. This is one of the primary reasons the club uses other venues in the city. Their new stadium broke ground in 2008 and is due to be completed in 2013. In the meantime, CSKA has been playing in Arena Khimki since 2010. They are currently sharing the stadium with rivals FC Dynamo Moscow, as they too are awaiting the completion of their own new stadium. 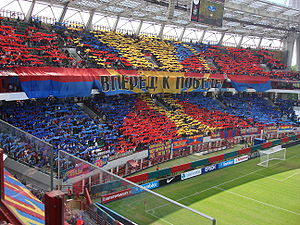 As of 19 August 2011, according to the Russian Premier League official site.
Note: Flags indicate national team as has been defined under FIFA eligibility rules. Players may hold more than one non-FIFA nationality.

As of 12 March 2011, according to the Official PFC CSKA Moscow website

The following players are listed by club's website as reserve players. They are registered with the Russian Premier League and are eligible to play for the first team.

Had international caps for their respective countries. Players whose name is listed in bold represented their countries while playing for CSKA.

Most league appearances for CSKA

Most league goals for CSKA