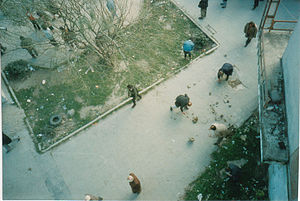 During the riots in the city of Vlorë, men broke rocks to hurl them at police. 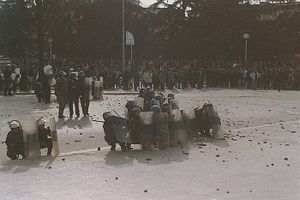 The 1997 unrest in Albania, also known as the Lottery Uprising or Anarchy in Albania,[5] was an uprising sparked by Ponzi scheme failures. Albania descended into anarchy and violence in which the government was toppled and some 2,000 people were killed.[6][7]

In 1992 the Democratic Party of Albania won the first free elections in Albania and Sali Berisha became president. In the mid-1990s, Albania was becoming a liberalized economy after years under a controlled economy. The rudimentary financial system became dominated by Ponzi schemes, and government officials endorsed a series of pyramid investment funds. By January 1997, the schemes (actually fronts for laundering money and arms trafficking) could no longer make payments once the number of investors grew to include two-thirds of Albanians,[6] who had been lured by the promise of getting rich quick.[8]

By January 1997 the inevitable end came, and the people of Albania, who had lost $1.2 billion (out of a small population of three million), took their protest to the streets.[9] Beginning in February, thousands of citizens launched daily protests demanding reimbursement by the government, which they believed was profiting from the schemes. On March 1, Prime Minister Aleksandër Meksi resigned and on March 2 President Sali Berisha declared a state of emergency.[9] On March 11, the Socialist Party of Albania won a major victory when their leader Bashkim Fino was appointed prime minister. However, the transfer of power did not halt the unrest, as protests spread to northern Albania. Although the government quelled revolts in the north, the ability of the government and military to maintain order began to collapse, especially in the southern half of Albania, which fell under the control of rebels and criminal gangs.[9]

All major population centers were engulfed in demonstrations by March 13, and foreign countries began to evacuate their citizens from Albania.[9] These evacuations included Operation Libelle and Operation Silver Wake.

The United Nations Security Council, in Resolution 1101, authorized a force of 7,000 on March 28 to direct relief efforts and to restore order to Albania. The UN feared the unrest would spread outside Albania's borders and contribute even more refugees to Europe. On April 15, the 7,000 troops launched Operation Sunrise, an Italian-led mission which helped restore rule of law to the country.[9]

After the unrest, over three million guns were transported to Kosovo and the guerrilla forces of Kosovo Liberation Army had received considerable armament.[10]

The political situation before the Rebellion

Pyramid schemes also known as rentier firms' started their operations in 1991. Their activity was based on obtaining a quantity of money and returning a greater amount based on a percentage. Although apparently functioning as a bank,Pyramids had no concrete investment from which to glean money and apparently did not lend. The first pyramid scheme, which opened in 1991, was that of Hajdin Sejdisë who later fled to Switzerland with several million dollars of Albanian businessmen. It was followed by 'Sudja' of Maksude Kadëna in 1993, a Gipsy who had previously worked as a worker in a shoe factory. By the end of 1996, pyramid schemes reached their peak. Interests that they offered were very tempting, where Sudja managed to provide 100% interest, which warned of imminent bankruptcy. Despite the advice of the IMF to close these schemes, the Albanian democratic government continued to allow their activities, often being involved in and personally profiting from them. In the period between 8–16 January 1997, the vast majority of the pyramids schemes collapsed, taking with them the life savings of Albanians. On January 22 the government froze the 'Xhaferri' firm. 'Gjallica', another firm, was half bankrupt while the 'Vefa' firm, which had managed to carry out some investment in the Albanian market in hotels, fuel and factories, continued normal activity. The social crisis that the collapse of the pyramid schemes brought, was arguably the worst in the history of Albania. A history which has often seen the very existence of Albania at risk.

The first protest held to resolve the crisis was that of 16 January in the South. On January 19 Tirana saw protest of the 'Sudja' creditors. On 24 January began the "de facto" rebellion with thousands of people in Lushnja who had lost money marching on the city hall in protest against the government's support of the schemes. The protest quickly decended into violence. Police forces were routed, the city hall and ajoining cinema burnt. One day later, on January 25, Tritan Shehu, chairman of the Democratic Party, was sent to Lushnje to resolve the situation, however on his arrival was held hostage for several hours at City Stadium and assaulted by the protestors. State Special Forces intervened in the city to extract Shehu. In the morning every government institution in the city was looted, destroyed and burnt down. On January 26th and 27th violence erupted in other southern towns such as Vlora on the coast. On 30th January the Forum for Democracy was formed by opposition parties with the role to lead the anti-government protests. Reason for the protests were originally economic, with nearly every family in Albania having lost money in the Pyramid schemes but naturally, anger was also directed against President Sali Berisha and against the government for allowing the schemes to continue despite the advice of the IMF. As allegations grew that Sali Berisha and others in government had personally profited from the schemes many became convinced that the democratic party must be removed by force. This was especially true in the city of Vlora. On 4th February distribution of a portion of lost money began at the counters of the National Commercial Bank, owned by the state. Rather than subduing the protests, this on the contrary increased peoples suspicion of government involvement. On 5th February the 'Gjallica' firm declared bankruptcy, and on 6th February violent protests resumed in Vlora. On 9 February State Police were attacked in Vlora, and a day later, also in South, fifty Special Force soldiers attacked and brutally despersed protestors. Delivery footage aired by the EuroNews shattered the authority of the state.

Hunger strike of students of the University of Vlora

Students of the Univercity of Vlore began a hunger strike on campus on 20 February. About 50 students join the hunger strike. Their demands were the resignation of the government and the full return of invested money. This strike is considered by some to have been the main driver of the escalation of the situation into armed conflict. On 22 February the Forum for Democracy came out in support of the strike. Students from Gjirokastër and Elbasan came to give their support. They were then driven by the students FRESSH Vlorë to Tirana. In contrast were the students of the University "Luigj Gurakuqi" in Shkodra, who through the Students Union declared: "The students share the pain of the citizens of Vlora in losing money in pyramid schemes, but on the other hand, think that freedom and democracy, homeland and nation have a higher price". On 26th February thousands of people surrounded the building of the University to defend from feared attack by The National Intelligence Service SHIK (Shërbimi Informativ Kombëtar.), The same day a group of strikers requested more medical help, putting in doubt the group of doctors near them. On 27 February in Vlora Shkodra comes the mayor, Bahri Borici of the United Right, in support of the hunger strike. 28 February 1997, will remain a black date in the history of Albania. After strengthening their protection against the building of the University, the rebel forces on the evening of 28 February, without warning attacked SHIK building. In efforts between the rebels and officers of stylish, very few in number, remain killing nine people, six officers and three civilians. The massacre of 28 February marks the start of a 10-day Civil War, and the beginning of anarchy in southern Albania for about a year.

On March 28 the United Nations adopt resolution no. 1101 for humanitarian aid to Albania. On April 15, Operation Alba forces began to arrive in Albania. About 7000 soldiers under the direction of Italy come to Albania to restore order and force of law. The first forces deployed in Durrës. Normality returned to Tirana.

Under a tense atmosphere developed campaigns for elections. Democrat leadership is unable to develop a normal campaign in areas of southern Albania. On the other hand, Left leaders accompanied by kapobandat of these cities, leaving behind a tragic balance. More than 60 people were killed during the campaign of the Socialist Party in the south. On 29 June 1997 held early parliamentary elections. Socialist Party allies are winning. Democrats suffer a deeper loss in their history. In Tirana, where it was thought that DP would win, the result is quite different after the Socialists won convincingly. Many of the members of the "Rescue Committee" came out of left forces candidates to publicly though they promised they would not get any government position without resolving the crisis of usury. On the same day also held a referendum on the form of governance. With 65% of the votes wins the Republic against the monarchy.

The consequences of the crisis

Balance of rebellion is 200 million dollars and material damage and killed over 3700 to 5000 wounded. Filluan lawsuits against the bosses of firms rentier. Was sentenced in absentia a part of the major figures in the government of the Democratic State: Safet Zhulali, Agim Shehu, etc. Gazidede Union. Kapobandave began legal proceedings against the cities of southern Albania. The country's economy was completely destroyed.

One of the main themes of Western media and analysts during the March riots was the North-South division. Various newspapers and TV stations claimed that the rebellion but a showdown between the two main political forces in the country, was also a clash between the northern (Ghegs) that supported Sali Berisha (even this Geg) and southern (Tosk) that supported the Socialist Party leadership its (mostly Tosk).

Taking advantage of difficult situations, criminal groups were armed and in an unexpected way was placed in charge of rebellion and took control of entire cities. Kapobandave Most had been imprisoned in the main prisons in Greece, and suddenly were able to escape, to come to Albania. The most famous is that of Zani Causey, who escaped from a high security prison of Larissa, in February 1997 and established in Vlora, the gang of Coles, with a group of friends. The rule of gangs was terrific. Typical cases remain Vlora, Berat and Lushnja. In Vlora was created 5 bands, but 2 were those who ruled the city, she and she Gaxhai Zani. Movement in the city starting from 10:00, when Flag's Square people gathered to hear the Committee of Rescue and close at 13:00. After that hour the streets were deserted and the only ones that moved were gangs. Gangs announce the speakers flyers or people not to go out tomorrow, as there would be fighting. Each night had attempted attacks with explosives and numerous shots in the air, along with dozens of dead. In Berat Dardha Altin rule was even more severe. Just as in the South, the movement was up at 13:00, but the killings were uncontrolled. Self Altin Pears was a killer expert. In Lushnje rule of Aldo Bare banda. The worst crime of this gang was a beheading his opponent and walk around the city. Cities were ruled by gangs Vlora, Berat, Tepelena, Memaliaj, Ballshi, Saranda, Gjirokastra, Lushnja, Pogradec, Cerrik, Tropoja.

Victory of the Socialists and the removal of Berisha

Massive gunfire in Tirana in celebration of the resignation of Berisha, which was the main demand of rebels. The insurgency ends.

In elections in June and July 1997, Berisha and his party were voted out of power, and the left coalition headed by the Socialist Party won. The Socialist party elected Rexhep Meidani as President of the Albanian Republic. All UN forces left Albania by August 11.