The Bolivian Armed Forces are the military of Bolivia.

The Bolivian Army has around 55,500 men. There are six military regions (regiones militares—RMs) in the army. The Army is organized into ten divisions. The Army maintains a small fleet of utility aircraft, primarily to support headquarters.

Soldiers in Cochabamba before a parade.

The army was organized into ten territorial divisions, each of which, with the exception of Viacha, occupied a region generally corresponding to the administrative departments, with some overlapping. Their division headquarters were located in: 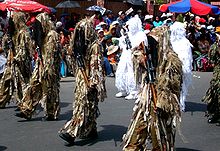 The Army maintains a small fleet of utility aircraft, primarily to support headquarters. 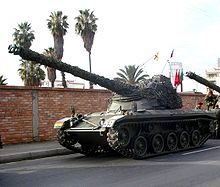 Towed artillery piece before a parade in Cochabamba. 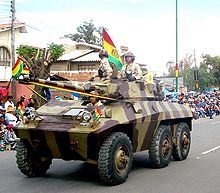 Army officers, NCOs, and enlisted personnel wear generally gray or, for tropical areas, gray-green service uniforms. Army fatigue uniforms were olive green, and combat uniforms were of US woodland pattern camouflage. The standard headgear for enlisted personnel is the beret bearing the national colors of red, yellow and green. Paratroops (paracaidistas) were distinguished by black berets, and Special Forces by green berets.

Two Pilatus PC-7 of the FAB.

Units under direct control of the general command of the FAB

The Bolivian Naval Force (Fuerza Naval Boliviana in Spanish), formerly Bolivian Navy (Armada Boliviana) is a naval force about 5,000 strong in 2008.[4] Although Bolivia has been landlocked since the War of the Pacific in 1879, Bolivia established a River and Lake Force (Fuerza Fluvial y Lacustre) in January 1963 under the Ministry of National Defense. It consisted of four boats supplied from the United States and 1,800 personnel recruited largely from the army. Bolivia's naval force was renamed the Bolivian Naval Force (Fuerza Naval Boliviana) in January 1966, but it also has been called the Bolivian Navy (Armada Boliviana). It became a separate branch of the armed forces in 1963. Bolivia has large rivers that are tributaries to the Amazon which are patrolled to prevent smuggling and drug trafficking. There is also a Bolivian Naval presence on Lake Titicaca, the highest navigable lake in the world, across which runs along the Peruvian frontier.

Landlocked Bolivia has not become reconciled with the loss of its coast to Chile, and the Navy exists to keep the hope of recovering its coast alive by cultivating a maritime consciousness.[citation needed] The Bolivian Navy takes part in many parades and government functions, but none more so than the Día Del Mar (Day of the Sea) in which Bolivia, every year, asks for the coast territories lost to Chile during the War of the Pacific (fought between Peru and Bolivia against Chile) from 1879 to 1884. This is still a sore point for Bolivia, influencing many modern-day political actions and trade decisions.

Naval vessels include several dozen boats, dozen or more of which are for riverine patrol, including the piranias, and riders, which are powerful river boats. In addition, Bolivia has several seagoing vessels, including the Santa Cruz de la Sierra (PR-51), and several flagged ships that sail with the permission of the "Capitanias Navales" Naval Registration Office. The Libertador Simón Bolívar, a ship acquired from Venezuela, use to navigate from its home port in Rosario, Argentina on the River Paraná. In 1993, the Navy was formally renamed the Naval Force (Fuerza Naval) and moved with the Bolivian Army under a single military authority.

Most of the officers are often educated in the Naval Academy where they graduate with a BS in Military and Naval Science, diploma accredited by the Military University and then they do other studies at the bachelor’s degree and master’s level. Argentina has their Naval Military Group in Bolivia advising at the highest level in naval strategy and tactics. Many Bolivian officers practice ocean sailing in Argentinean big naval ships. The Bolivian Navy has several Special Forces units to address both internal and external conflicts. La Fuerza Naval Boliviana cubre el extenso territorio fluvial y lacustre boliviano dividiendo sus funciones entre los siguientes Distritos Navales, nótese que los nombres de estas unidades derivan de la cuenca fluvial o región en la que operan: Bolivian Naval Force covers the extensive river and lake Bolivian territory divided between the following functions Naval Districts, note that the names of these units are derived from the basin or region where they operate: 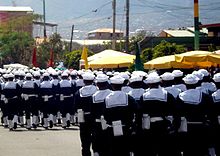 Marines of Bolivia marching in Cochabamba.

The Marine component of the FNB originated with the creation of the Marine Battalion Almirante Grau in the early 1980s.This unit of 600 men is based on Tiquina naval base on Lake Titicaca.Later changes name to Marine Battalion Independence, based in Chua (Not to be confused with the Independence RI17 EB).At present this battalion maintains a similar number of troops including premilitares. Staff of this unit is part of Task Force Blue Devils or are stationed in various naval bases.There are currently seven infantry battalions which are distributed as follows:

This specialty is essentially similar to its counterpart in the Army, carrying out operations such as Important Persons Protection (IPP) Physical Security (SEF) or Patrol Facility (PAT), with additions such as signals or naval protocol.There Naval detachments of PM in all district headquarters or FNB Naval Area.But only have the following units at the Battalion: 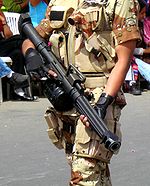 The Bolivian Navy has a total of 173 vessels, mostly stationed on Lake Titicaca:

Bolivia's navy operates two utility aircraft for the use of headquarters.

This article was adapted from the CIA World Factbook 2000.