Microcar is a French microcar manufacturer. The company was founded in 1984 as a division of Bénéteau group, a major sailboat manufacturer. Production moved to a new custom-built factory in September 2000. In September 2008, Microcar was acquired by Ligier Automobiles in a deal backed by the Italian private equity firm 21 Investimenti Partners. The merger created Europe's second biggest manufacturer of microcars, and largest maker of quadricycles, or "sans permis" (license-exempt) vehicles. The Microcar and Ligier brands are to retain their separate identities and production facilities. Phillipe Ligier, son of company founder Guy Ligier, serves as CEO of the expanded Ligier Automobiles.

The current model range consists solely of the M.Go model introduced in 2009. The M.Go is available in conventional, diesel-engined S, S PACK, MICA, SXI, and Sport trim levels, as well as full electric.

Prior to the M.Go, Microcar was known for their long-running MC Series models, sold in English-speaking markets as the short-wheelbase MC1 and long-wheelbase MC2. The company also sold a small commercial vehicle called the Sherpa, which was a badge-engineered Ligier X-Pro. The Sherpa was discontinued after the Ligier merger, and the MC has been dropped in favor of the new M.Go.

From 2006-2010, the long-wheelbase version of Microcar's MC Series was used as the basis for the ZENN EV assembled in Canada by ZENN Motor Company with an electric drivetrain. It was marketed in the U.S. and Canada under the ZENN brand as a "neighborhood electric vehicle"(NEV), with its top speed governed to 25mph. Microcar began distributing the ZENN in Europe during 2007 under its own brand, as the Microcar ZENN. ZENN Motor purchased engineless, rolling chassis from Microcar and installed their own electric motor and drivetrain. Microcar brought electric vehicle production fully in-house with the M.Go Electric in 2009, and ZENN ceased production of its MC-based vehicle in 2010. 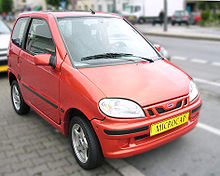 Engineless units were formerly bought from French automaker Microcar by Ontario's ZENN Motor Company before final electric motor assembly is completed. The ZENNs retailed for $16,900 while actual cost was $65,000. ZENN has stopped producing cars as of 2010.[1]