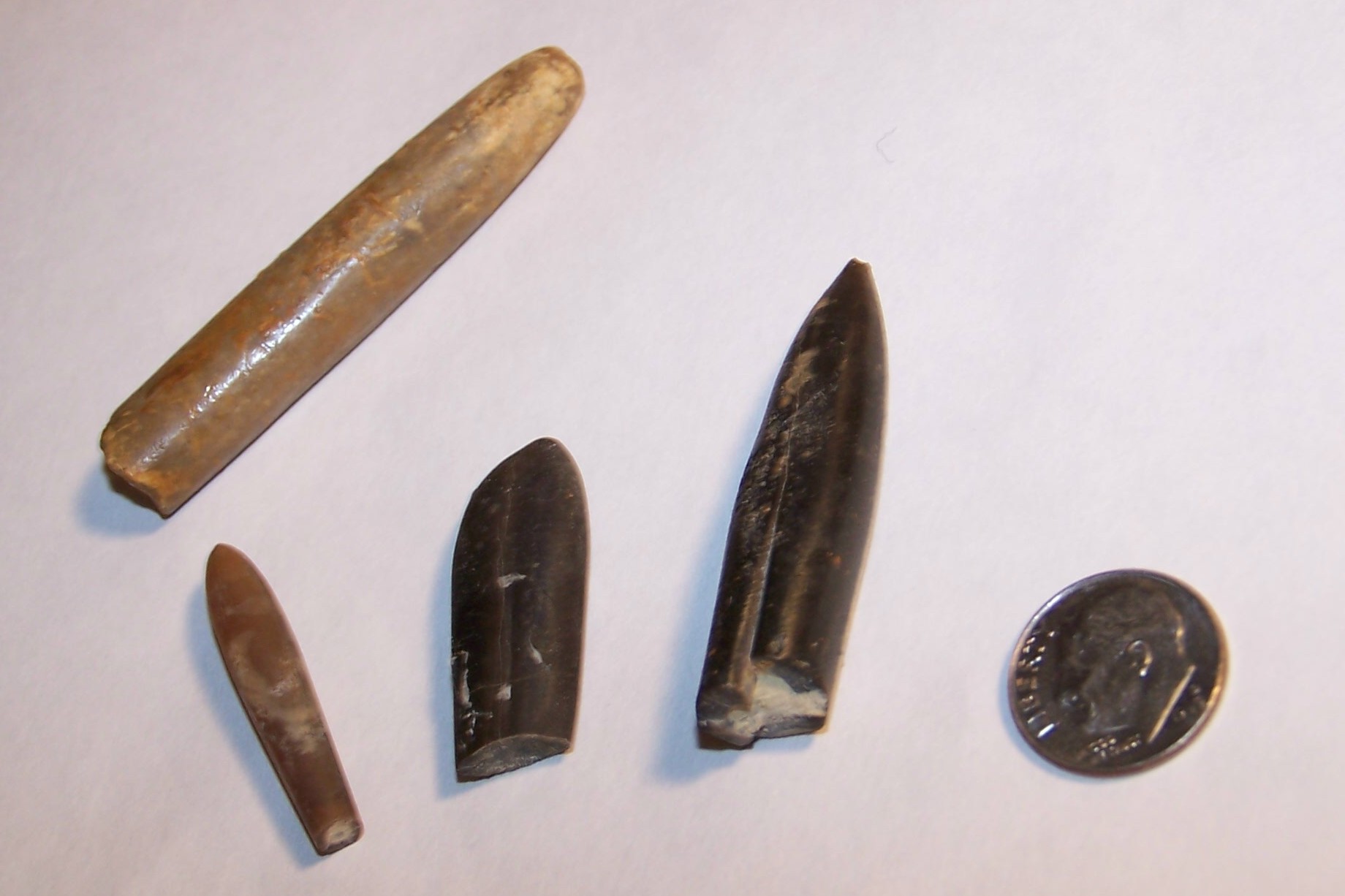 Belemnites (or belemnoids) are an extinct group of marine , very similar in many ways to the modern and closely related to the modern . Like them, the belemnites possessed an ink sac, but, unlike the squid, they possessed ten arms of roughly equal length and no tentacles.

Belemnites were numerous during the and periods, and their s are abundant in marine rocks, often accompanying their cousins the s. The belemnites become extinct at the end of the Cretaceous period along with the ammonites. The belemnites' origin lies within the bactritoid nautiloids, which date from the period; well-formed belemnite guards can be found in rocks dating from the (or Early ) onward through the Cretaceous. Other fossil s include s, s and s.

Normally with fossil belemnites only the back part of the shell (called the "guard" or "rostrum") is found. The guard is elongated and bullet-shaped, being cylindrical and either pointed or rounded at one end. The hollow region at the front of the guard is termed the "alveolus", and this houses a chambered conical-shaped part of the shell (called the ""). The phragmocone is usually only found with the better preserved specimens. Projecting forwards from one side of the phragmocone is the thin "pro-ostracum".

While belemnite phragmocones are with the shells of other and are similarly composed of , belemnite guards are evolutionarily novel and are composed of , thus tending to preserve well. Broken guards show a structure of radiating calcite fibers and may also display concentric . The bulk geochemical signature contained within belemnite guards of the Peedee Formation (, southeast USA) has long been used as a global standard ("PDB") against which all other geochemical samples are measured, for both carbon isotopes and oxygen isotopes.

The guard, phragmocone and pro-ostracum were all internal to the living creature, forming a skeleton which was enclosed entirely by soft muscular tissue. The original living creature would have been larger than the fossilized shell, with a long streamlined body and prominent eyes. The guard would have been in place toward the rear of the creature, with the phragmocone behind the head and the pointed end of the guard facing backward. The guard of the belemnite "", which is found in and , can measure up to 46 cm in length (18 inches), giving the living animal an estimated length of 3 metres (10 feet).

Some belemnites (such as "Belemnites") serve as s, particularly in the Cretaceous of Europe, enabling s to date the age the rocks in which they are found.

Like some modern squid, belemnite arms carried a series of small hooks for grabbing . Belemnites were efficient s that caught small and other marine animals with their arms and ate them with their beak-like jaws. In turn, belemnites appear to have formed part of the diet of marine s such as s, whose fossilized s frequently contain phosphatic hooks from the arms of cephalopods.