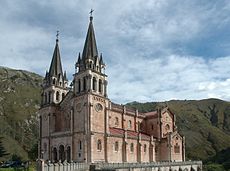 Covadonga (Asturian: Cuadonga, from Latin: Cova Dominica, "Cavern of the Lady", Arabic: صخرة بلاي‎ Ṣakhrat Bilāy ("the rock of the affliction or of the putting to the test")) is a village and one of 11 parishes in Cangas de Onís, a municipality within the province and autonomous community of Asturias, in northwestern Spain. It is situated in the Picos de Europa mountains.

In 722 AD, Iberian Christians won a namesake battle over the Moors in Covadonga. This was the first significant Christian victory over the occupying Moors and is often considered to be the start of the 770-year effort to expel the Moors from Iberia, the Reconquista. Our Lady of Covadonga is a significant Marian shrine. The Spanish Army has, over the years, named several of its units "Covadonga".

In the mountains above the town there are lakes known as Lagos de Covadonga, and the road leading to the lakes is often featured in the Vuelta a España bicycle race.