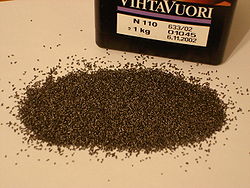 Smokeless powder is the name given to a number of propellants used in firearms and artillery which produce negligible smoke when fired, unlike the older gunpowder (black powder) which they replaced. The basis of the term smokeless is that the combustion products are mainly gaseous, compared to around 55% solid products (mostly potassium carbonate, potassium sulfate, and potassium sulfide) for black powder.[1] Despite its name, smokeless powder is not completely smoke-free.[2]

Since the 14th century[3] gunpowder was not actually a physical "powder," and smokeless powder can only be produced as a pelletized or extruded granular material. Smokeless powder allowed the development of modern semi- and fully automatic firearms. Burnt black powder leaves a thick, heavy fouling which is hygroscopic and causes rusting of the barrel. The fouling left by smokeless powder exhibits none of these properties. This makes an autoloading firearm with many moving parts feasible (which would otherwise jam or seize under heavy black powder fouling).

Smokeless powders are classified as, typically, division 1.3 explosives under the UN Recommendations on the transportation of Dangerous goods - Model Regulations, regional regulations (such as ADR) and national regulations (such the United States' ATF). However, they are used as solid propellants; in normal use, they undergo deflagration rather than detonation.

Military commanders had been complaining since the Napoleonic Wars about the problems of giving orders on a gunnery battlefield. Verbal commands could not be heard above the noise of the guns, and visual signals could not be seen through the thick smoke from the gunpowder used by the guns. Unless there was a strong wind, after a few shots, soldiers using black powder ammunition would have their view obscured by a huge cloud of smoke. Snipers or other concealed shooters were given away by a cloud of smoke over the firing position. Black powder is also corrosive, making cleaning mandatory after every use. Likewise, black powder's tendency to produce severe fouling caused actions to jam and often made reloading difficult.

A major step forward was the discovery of guncotton, a nitrocellulose-based material, by Christian Friedrich Schönbein in 1846. He also promoted its use as a blasting explosive.[4] Guncotton was more powerful than gunpowder, but at the same time was somewhat more unstable. This made it unsuitable as a propellant for small firearms: not only was it dangerous under field conditions, but guns that could fire thousands of rounds using gunpowder would reach their service life after only a few hundred with the more powerful guncotton. It did find wide use with artillery. However, within a short time there were a number of massive explosions and fatalities in guncotton factories due to lack of appreciation of its sensitivity and the means of stabilization. Guncotton then went out of use for some twenty years or more until it could be tamed; it was not until the 1880s that it became a viable propellant.[4]

In 1884, Paul Vieille invented a smokeless gunpowder called Poudre B, made from guncotton gelatinized with ether and alcohol. It was passed through rollers to form paper thin sheets, which were cut into flakes of the desired size.[5] The resulting propellant, today known as pyrocellulose, contains somewhat less nitrogen than guncotton and is less volatile. A particularly good feature of the propellant is that it will not detonate unless it is compressed, making it very safe to handle under normal conditions.

Vieille's powder revolutionized the effectiveness of small guns, because it gave off almost no smoke and was three times more powerful than black powder. Higher muzzle velocity meant a flatter trajectory and less wind drift and bullet drop, making 1000 meter shots practicable. Since less powder was needed to propel a bullet, the cartridge could be made smaller and lighter. This allowed troops to carry more ammunition for the same weight. Also, it would burn even when wet. Black powder ammunition had to be kept dry and was almost always stored and transported in watertight cartridges.

Vielle's powder was used in the Lebel rifle that was immediately introduced by the French Army to exploit its huge benefits over black powder. Other European countries swiftly followed and started using their own versions of Poudre B, the first being Germany and Austria which introduced new weapons in 1888.

Meanwhile, in 1887, Alfred Nobel developed a smokeless gunpowder called Ballistite.[6] A modified form of this was devised by Sir Frederick Abel and James Dewar which eventually became known as Cordite, leading to a lengthy court battle between Nobel and the other two inventors over alleged British patent infringement. In the USA, in 1890, a patent for smokeless powder was obtained by Hudson Maxim.[7]

These newer propellants were more stable and thus safer to handle than Poudre B, and also more powerful. Today, propellants based on nitrocellulose alone (typically an ether-alcohol colloid of nitrocellulose) are described as single-base powder,[8] whereas cordite-like mixtures using nitroglycerin to dissolve the nitrocellulose are known as double-base powder.[9] Single and double-base smokeless powders now make up the vast majority of propellants used in firearms. They are so common that most modern references to gunpowder refer to a smokeless powder, particularly when referring to small arms ammunition.[citation needed] A triple-base powder including nitroguanidine was developed as a flashless cordite primarily for large naval guns, but also used in battle tank ammunition.

Nitrocellulose deteriorates with time, yielding acidic byproducts. Those byproducts catalyze the further deterioration, increasing its rate. The released heat, in case of bulk storage of the powder, or too large blocks of solid propellant, can cause self-ignition of the material. Single-base nitrocellulose propellants are most susceptible to degradation; double-base and triple-base propellants tend to deteriorate more slowly. To neutralize the decomposition products, which could otherwise cause corrosion of metals of the cartridges and gun barrels, calcium carbonate is added to some formulations. 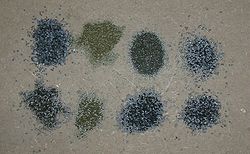 Smokeless powder may be corned into small spherical balls or extruded into cylinders or flakes using solvents such as ether. The properties of the propellant are greatly influenced by the size and shape of its grains. The specific surface area of the propellant influences the speed of burning, and the size and shape of the particles determine the specific surface area. By manipulation of the grain shape it is possible to influence the ignition rate and hence the rate at which pressure builds during combustion. Smokeless powder burns only on the surfaces of the granules, flakes or cylinders (described as granules for short). Larger granules burn more slowly, and the burn rate is further controlled by flame-deterrent coatings which retard burning slightly. The intent is to regulate the burn rate so that a more or less constant pressure is exerted on the propelled projectile as long as it is in the barrel so as to obtain the highest velocity. Cannon powder has the largest granules, up to thumb-sized cylinders with seven perforations (one central and the other six in a circle halfway to the outside of the cylinder's end faces). The perforations stabilize the burn rate because as the outside burns inward (thus shrinking the burning surface area) the inside is burning outward (thus increasing the burning surface area, but faster, so as to fill up the increasing volume of barrel presented by the departing projectile).[12] Fast-burning pistol powders are made by extruding shapes with more area such as flakes or by flattening the spherical granules. Drying is usually performed under a vacuum. The solvents are condensed and recycled. The granules are also coated with graphite to prevent static electricity sparks from causing undesired ignitions.[13]

The propellant formulations may contain various energetic and auxiliary components:

The United States Navy manufactured single-base tubular powder for naval artillery at Indian Head, Maryland, beginning in 1900. Similar procedures were used for United States Army production at Picatinny Arsenal beginning in 1907[8] and for manufacture of smaller grained Improved Military Rifle (IMR) powders after 1914. Short-fiber cotton linter was boiled in a solution of sodium hydroxide to remove vegetable waxes, and then dried before conversion to nitrocellulose by mixing with concentrated nitric and sulfuric acids. Nitrocellulose still resembles fibrous cotton at this point in the manufacturing process, and was typically identified as pyrocellulose because it would spontaneously ignite in air until unreacted acid was removed. The term guncotton was also used; although some references identify guncotton as a more extensively nitrated and refined product used in torpedo and mine warheads prior to use of TNT.[31]

Unreacted acid was removed from pyrocellulose pulp by a multistage draining and water washing process similar to that used in paper mills during production of chemical woodpulp. Pressurized alcohol removed remaining water from drained pyrocellulose prior to mixing with ether and diphenylamine. The mixture was then fed through a press extruding a long turbular cord form to be cut into grains of the desired length.[32]

Alcohol and ether were then evaporated from "green" powder grains to a remaining solvent concentration between 3 percent for rifle powders and 7 percent for large artillery powder grains. Burning rate is inversely proportional to solvent concentration. Grains were coated with electrically conductive graphite to minimize generation of static electricity during subsequent blending. "Lots" containing more than ten tonnes of powder grains were mixed through a tower arrangement of blending hoppers to minimize ballistic differences. Each blended lot was then subjected to testing to determine the correct loading charge for the desired performance.[33][34]

Military quantities of old smokeless powder were sometimes reworked into new lots of propellants.[35] Through the 1920's Dr. Fred Olsen worked at Picatinny Arsenal experimenting with ways to salvage tons of single-base cannon powder manufactured for World War I. Dr. Olsen was employed by Western Cartridge Company in 1929 and developed a process for manufacturing spherical smokeless powder by 1933.[36] Reworked powder or washed pyrocellulose can be dissolved in ethyl acetate containing small quantities of desired stabilizers and other additives. The resultant syrup, combined with water and surfactants, can be heated and agitated in a pressurized container until the syrup forms an emulsion of small spherical globules of the desired size. Ethyl acetate distills off as pressure is slowly reduced to leave small spheres of nitrocellulose and additives. The spheres can be subsequently modified by adding nitroglycerine to increase energy, flattening between rollers to a uniform minimum dimension, coating with phthalate deterrents to retard ignition, and/or glazing with graphite to improve flow characteristics during blending.[37][38]

Nitrocellulose contains insufficient oxygen to completely oxidize its carbon and hydrogen. The oxygen deficit is increased by addition of graphite and organic stabilizers. Products of combustion within the gun barrel include flammable gasses like hydrogen and carbon monoxide. At high temperature, these flammable gasses will ignite when turbulently mixed with atmospheric oxygen beyond the muzzle of the gun. During night engagements the flash produced by ignition can reveal the location of the gun to enemy forces and cause temporary night-blindness among the gun crew by photo-bleaching visual purple. Flash suppressors are commonly used on small arms to reduce the flash signature, but this approach has been less successful for artillery. Artillery muzzle flash up to 150 feet (50 meters) from the muzzle has been observed, and can be reflected off clouds and be visible for distances up to 30 miles (50 kilometers).[39]