Chaponost is a commune in the Rhône department in eastern France.

It is known for its Roman aqueducts. 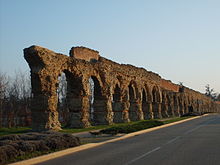 Vestiges of the roman aqueduct in Chaponost 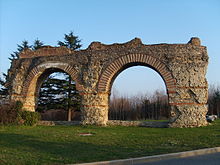 Vestiges of the roman aqueduct in Chaponost

The Roman aqueduct of the Gier, estimated to be 75 km long, was built under Hadrian's reign during the second century CE to enable water supply of the Roman city of Lugdunum (Lyon) from the Mont Pilat (source of river Gier). Arches of the aqueducts (around 92 arches on 550 m) are located on the territory of the commune, at the site of "Le Plat de l'Air".[1]