The A4119 is an A road linking Tonypandy with Cardiff in south Wales.

Settlements served by the route include:

City and County of Cardiff

The A4119 starts outside the Wales Millenium Centre at Cardiff Bay, where it proceeds through the West Side of Cardiff through Butetown, Grangetown, Riverside and Canton until a Junction with the A48 Western Avenue at Llandaff. From here is proceeds through Llandaff passing the BBC Wales studios. After leaving Llandaff the road takes on a more rural setting with many bends crossing the M4 Motorway near Capel Llanitern. From here the road snakes passed the settlement of Creigiau before leaving Cardiff.

The road enters the County Borough of Rhondda Cynon Taf (formerly Mid Glamorgan) at Groes-faen. The road continues through the Village until it comes to a T-Junction at The Castell Mynach Public House. To the left is a Spur of the A4119 that links to Junction 34 of the M4 Motorway. Off the roundabout at the Junction is the Bosch Electronics Plant and lanes to Pendoylan and Hensol Castle in the Vale of Glamorgan.

The road continues after the t-junction past Miskin and Mwyndy.

Development of Infastructure in Talbot Green

The A4119 through Talbot Green was first built Circa. 1977[citation needed] as a single carriageway passing to the side of the village straight on to Ely Valley Road, easing pressure off the original small lanes that lead from Talbot Green to the area known as Mwyndy, south of the village. The road here was built at the same time as an extension of the original Talbot - Cardiff road, leading to Junction 34 of the M4 Motorway, and creating better access to the lanes leading to the Vale of Glamorgan. At Mwyndy Cross, you can still see the original lane that the road used, signposted "Arthur Llewelyn Jenkins", the lane is accessible to the furniture store and as far as Cefn-y-Parc cemetery but is blocked at the bypass. There is a roundabout with the Talbot Green Bypass after passing Mwyndy Cross and the original roads - the A473 Pontypridd to Bridgend Road. This roundabout was added when the bypass was built in 1991. Another roundabout, was located at the base of Llantrisant, where the A473 originally ran. When the bypass was built, it cut off the original main road from Cowbridge via Pontyclun and therefore traffic is forced to use the new Bypass. 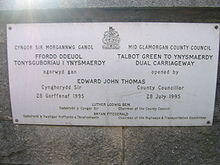 The decision was made by Mid Glamorgan County Council in the early 1990s to dual the section of A4119 between Ynysmaerdy and Mwyndy because: The decline of the Welsh Coal industry, will lead to more people needing to venture out of the Valleys to find work.[citation needed] This would be the last major road project undertaken by Mid Glamorgan before its abolishment in 1996. The completed "Talbot Green to Ynysmaerdy Dual Carriageway" officially opened on the 28th of July, 1995. The scheme replaced the old Roundabout near Llantrisant with a four way traffic-lit junction, and completely replaced the original Ely Valley Road at Talbot Green apart from the first portion: a t-junction from the centre Talbot Green's high street that leads to a row of houses and a Golf Club, this is the only remaining section Ely Valley Road that is un-altered, still bearing the original road surface and signage, although it is now a Cul-de-sac. A department store called "Homeworld" opened alongside the new Dual Carriageway at Talbot Green until the store was closed in 1999 and demolished in 2000. This, alongside with a 1980's Tesco Store marked the rush of new developments in the area, the original Tesco store was closed and demolished in 2003, to coincide with the opening of a new Tesco Extra Store (which relocated to the former "Homeworld" site). Talbot Green Shopping Park was built on the former Tesco site and opened in 2004. 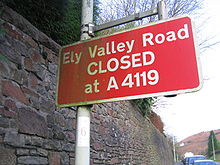 Ely Valley Road CLOSED at A4119

At the next roundabout the road takes the shape of a bow passed the Ely Meadows which is now the site of Magden Park, a development of Offices, Hotel, Pub and private Health facility.[1] Bypassing the Royal Glamorgan Hospital, which opened in 2000 [2], Avionics department of British Airways[3] and the Headquarters of the Welsh Blood Service.[4] On the south-bound carriageway is a long stretch of original road, although now a parking area where refreshment vans and sleepy truckers are a common sight, it provides access to some houses and a rural lane leading to Llantrisant.

The Road then comes to a roundabout with a turn off for the Llantrisant Industrial Park which is home to the Royal Mint.[5]

Another smaller roundabout at the village of Ynysmaerdy, where the new Headquarters of the South Wales Fire and Rescue Service is located[6], marks the end of the Dual Carriageway, the road becomes a single carriageway again at this point.

Past Ynysmaerdy the road starts to climb a hill, which is known locally as "Stink Pot Hill" because of the sewerage works that is on the side of the road. At the next roundabout the road splits, this is where a bypass separates from the original course of the A4119. The old road through the village of Coed-Ely is to the right. The bypass, completed in 1987, takes the route of the old Ely Valley Railway, and the former site of the Coed-Ely Colliery is on the left. From here the road is still single carriageway with numerous rest areas. The road continues on another bypass past Tonyrefail. Shortly after Tonyrefail the road once again forks, with a junction for the A4233 which links with Trebanog and Porth. The A4119 from here follows the floor of the Valley through woodland and past a small industrial estate with the Village of Williamstown. At this roundabout the A4119 meets momenterally with its original course before continuing along the old Railway line. The route then bypasses the village of Penygraig and south of Tonypandy where is progresses down a steep incline. There is a spur with Clydach Vale before the road, still following an old railway line, progresses down to the floor of the valley where the A4119 ends with a roundabout of the A4058. Originally the A4119 continued along Colliers Way and Llwynypia Road, where it again followed its original course, to a Terminus at Llwynypia Hospital with the A4058, but following the completion of the Porth Relief Road, the roads were re-numbered. Therefore Colliers Way and the Tonypandy North Bypass are now part of the A4058 Pontypridd to Treorchy route.