Both Thoth and Hermes were gods of writing and of magic in their respective cultures. Thus, the Greek god of interpretive communication was combined with the Egyptian god of wisdom as a patron of astrology and alchemy. In addition, both gods were psychopomps; guiding souls to the afterlife. The Egyptian Priest and Polymath Imhotep had been deified long after his death and therefore assimilated to Thoth in the classical and hellenistic period.[3] The renowned scribe Amenhotep and a wise man named Teôs were equally deified as gods of wisdom, science and medicine and thus placed alongside to Imhotep in shrines dedicated to Thoth-Hermes during the Ptolemaic period [4] These associations to Thoth-Hermes could partially explain why some later greek scholars linked Hermes Trismegistus to a hypothetical historical figure, given the numerous deifications.

A Mycenaean Greek reference found on a Linear B clay tablet at Pylos[5] to a deity or semi-deity called TI-RI-SE-RO-E, Trisheros (the "thrice or triple hero[6]") could be connected to the later epithet "thrice wise" "Trismegistos", applied to Hermes/Thoth. On the same Tn 316 tablet as well as other Linear B tablets, found in Pylos and Knossos, appears the name of the deity "Hermes" as E-MA-A, but not in any apparent connection with the "Trisheros". This interpretation of poorly understood Mycenaean material is disputed, since Hermes Trismegistus is not referenced in any of the copious sources before he emerges in Hellenistic Egypt.

The majority of Greeks, and later Romans, did not accept Hermes Trismegistos in the place of Hermes[citation needed]. The two gods remained distinct from one another. Cicero noted several individuals referred to as "Hermes": "the fifth, who is worshipped by the people of Pheneus [in Arcadia], is said to have killed Argus, and for this reason to have fled to Egypt, and to have given the Egyptians their laws and alphabet: he it is whom the Egyptians call Theyt."[7] In the same place, Cicero mentions a "fourth Mercury (Hermes) was the son of the Nile, whose name may not be spoken by the Egyptians." The most likely interpretation of this passage is as two variants on the same syncretism of Greek Hermes and Egyptian Thoth (or sometimes other gods); the one viewed from the Greek-Arcadian perspective (the fifth, who went from Greece to Egypt), the other viewed from the Egyptian perspective (the fourth, where Hermes turns out "actually" to have been a "son of the Nile," i.e. a native god). Both these very good early references in Cicero (most ancient Trismegistus material is from early centuries CE) corroborate the view that Thrice-Great Hermes originated in Hellenistic Egypt through syncretism with Egyptian gods (the Hermetica refer most often to Thoth and Amun).[8] 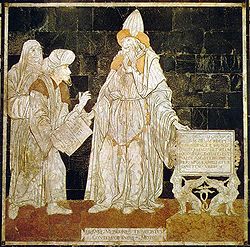 Hermes Trismegistus, floor mosaic in the Cathedral of Siena

The Hermetic literature added to the Egyptian concerns with conjuring spirits and animating statues that inform the oldest texts, Hellenistic writings of Greco-Babylonian astrology and the newly developed practice of alchemy (Fowden 1993: pp65–68). In a parallel tradition, Hermetic philosophy rationalized and systematized religious cult practices and offered the adept a method of personal ascension from the constraints of physical being, which has led to confusion of Hermeticism with Gnosticism, which was developing contemporaneously.[9]

As a divine source of wisdom, Hermes Trismegistus was credited with tens of thousands of writings of high standing, reputed to be of immense antiquity. Plato's Timaeus and Critias state that in the temple of Neith at Sais, there were secret halls containing historical records which had been kept for 9,000 years. Clement of Alexandria was under the impression that the Egyptians had forty-two sacred writings by Hermes, encapsulating all the training of Egyptian priests. Siegfried Morenz has suggested (Egyptian Religion) "The reference to Thoth's authorship...is based on ancient tradition; the figure forty-two probably stems from the number of Egyptian nomes, and thus conveys the notion of completeness." The Neo-Platonic writers took up Clement's "forty-two essential texts".

The Hermetica, is a category of papyri containing spells and initiatory induction procedures. In the dialogue called the Asclepius (after the Greek god of healing) the art of imprisoning the souls of demons or of angels in statues with the help of herbs, gems and odors, is described, such that the statue could speak and engage in prophecy. In other papyri, there are recipes for constructing such images and animating them, such as when images are to be fashioned hollow so as to enclose a magic name inscribed on gold leaf.

The origin of the description Trismegistus or "thrice great" is unclear. Copenhaver reports that this name is first found in the minutes of a meeting of the council of the Ibis cult, held in 172 BCE near Memphis in Egypt.[10] Fowden however asserts that the earliest occurrence of the name was in the Athenagora by Philo of Byblos circa 64–141 CE.[11] Another explanation is that the name is derived from an epithet of Thoth found at the Temple of Esna, "Thoth the great, the great, the great."[2] The date of his sojourn in Egypt in his last incarnation is not now known, but it has been fixed at the early days of the oldest dynasties of Egypt, long before the days of Moses. Some authorities regard him as a contemporary of Abraham, and some Jewish traditions go so far as to claim that Abraham acquired a portion of his mystical knowledge from Hermes himself (Kybalion).

Many Christian writers, including Lactantius, Augustine, Giordano Bruno, Marsilio Ficino, Campanella and Giovanni Pico della Mirandola considered Hermes Trismegistus to be a wise pagan prophet who foresaw the coming of Christianity.[12] They believed in a prisca theologia, the doctrine that a single, true theology exists, which threads through all religions, and which was given by God to man in antiquity[13][14] and passed through a series of prophets, which included Zoroaster and Plato. In order to demonstrate the verity of the prisca theologia Christians appropriated the Hermetic teachings for their own purposes. By this account Hermes Trismegistus was either, according to the fathers of the Christian church, a contemporary of Moses[15] or the third in a line of men named Hermes, i.e. Enoch, Noah and the Egyptian priest king who is known to us as Hermes Trismegistus,[16] or "thrice great" on account of being the greatest priest, philosopher and king.[16][17]

This last account of how Hermes Trismegistus received the appellation "Trismegistus," meaning "Thrice Great," is derived from statements in the The Emerald Tablet of Hermes Trismegistus, that he knows the three parts of the wisdom of the whole universe.[18] The three parts of the wisdom are alchemy, astrology, and theurgy, or alternatively: alchemy, astrology, and geometry. The pymander, from which Marsilio Ficino formed his opinion, states that "they called him Trismegistus because he was the greatest philosopher and the greatest priest and the greatest king".[19]

Another explanation, in the Suda (10th century), is that "He was called Trismegistus on account of his praise of the trinity, saying there is one divine nature in the trinity."[20]

The Asclepius and the Corpus Hermeticum are the most important of the Hermetica, writings attributed to Hermes Trismegistus, which survive. During the Renaissance it was accepted that Hermes Trismegistus was a contemporary of Moses, however after Casaubon’s dating of the Hermetic writings as no earlier than the second or third century CE, the whole of Renaissance Hermeticism collapsed.[21] As to their actual authorship:

Hermes Trismegistus is described in the Corpus Hermeticum in a Euhemerist fashion, as a man who became a god, or as a man who was the son of a god.[citation needed]

During the Middle Ages and the Renaissance, the writings attributed to Hermes Trismegistus, known as Hermetica, enjoyed great prestige and were popular among alchemists. The "hermetic tradition" consequently refers to alchemy, magic, astrology and related subjects. The texts are usually divided into two categories: the "philosophical", and the "technical" hermetica. The former deals mainly with issues of philosophy, and the latter with practical magic, potions and alchemy. Spells to magically protect objects, for example, are the origin of the expression "Hermetically sealed".

The classical scholar Isaac Casaubon in De rebus sacris et ecclesiasticis exercitationes XVI (1614) showed, through an analysis of the Greek language used in the texts, that those texts which were believed to be of ancient origin were in fact much more recent: most of the "philosophical" Corpus Hermeticum can be dated to around AD 300. However, flaws in this dating were discerned by the 17th century scholar Ralph Cudworth, who argued that Casaubon's allegation of forgery could only be applied to three of the seventeen treatises contained within the Corpus Hermeticum. Moreover, Cudworth noted Casaubon's failure to acknowledge the codification of these treatises as a late formulation of a pre-existing oral tradition. According to Cudworth, the texts must be viewed as a terminus ad quem and not a quo. [23]

Antoine Faivre, in The Eternal Hermes (1995) has pointed out that Hermes Trismegistus has a place in the Islamic tradition, though the name Hermes does not appear in the Qur'an. Hagiographers and chroniclers of the first centuries of the Islamic Hegira quickly identified Hermes Trismegistus with Idris[citation needed], the nabi of surahs 19.57 and 21.85, whom the Arabs also identified with Enoch (cf. Genesis 5.18–24). Idris/Hermes was termed "Thrice-Wise" Hermes Trismegistus because he had a threefold origin: the first Hermes, comparable to Thoth, was a "civilizing hero," an initiator into the mysteries of the divine science and wisdom that animate the world: he carved the principles of this sacred science in hieroglyphs. The second Hermes, in Babylon, was the initiator of Pythagoras. The third Hermes was the first teacher of alchemy. "A faceless prophet," writes the Islamicist Pierre Lory, "Hermes possesses no concrete or salient characteristics, differing in this regard from most of the major figures of the Bible and the Quran."[24] A common interpretation of the representation of "Trismegistus" as "thrice great" recalls the three characterizations of Idris: as a messenger of god, or a prophet; as a source of wisdom, or hikmet (wisdom from hokmah); and as a king of the world order, or a "sultanate." These are referred to as, müselles bin ni'me.

In the Bahá'í writings

Bahá'u'lláh, founder of the Bahá'í Faith, in a Tablet identifies Idris with Hermes.[25] He does not, however, specifically name Idris as the prophet of the Sabians.

Modern occultists suggest that some Hermetic texts may be of Pharaonic origin, and that the legendary "forty-two essential texts" that contain the core Hermetic religious beliefs and philosophy of life remain hidden in a secret library.

In some trance "readings" of Edgar Cayce, Hermes or Thoth was an engineer from the submerged Atlantis, who also built, designed or directed the construction of the Pyramids of Egypt.

The book Kybalion, by "The Three Initiates", addresses Hermetic principles.

Within the occult tradition, Hermes Trismegistus is associated with several wives, and more than one son who took his name, as well as more than one grandson[citation needed]. This repetition of given name and surname throughout the generations may at least partially account for the legend of his longevity, especially as it is believed that many of his children pursued careers as priests in mystery religions[citation needed].