CORDIC (digit-by-digit method, Volder's algorithm) (for COordinate Rotation DIgital Computer) is a simple and efficient algorithm to calculate hyperbolic and trigonometric functions. It is commonly used when no hardware multiplier is available (e.g., simple microcontrollers and FPGAs) as the only operations it requires are addition, subtraction, bitshift and table lookup.

The modern CORDIC algorithm was first described in 1959 by Jack E. Volder. It was developed at the aeroelectronics department of Convair to replace the analog resolver in the B-58 bomber's navigation computer.[1]

Although CORDIC is similar to mathematical techniques published by Henry Briggs as early as 1624, it is optimized for low complexity finite state CPUs.

Originally, CORDIC was implemented using the binary numeral system. In the 1970s, decimal CORDIC became widely used in pocket calculators, most of which operate in binary-coded-decimal (BCD) rather than binary.

CORDIC is particularly well-suited for handheld calculators, an application for which cost (e.g., chip gate count has to be minimized) is much more important than is speed. Also the CORDIC subroutines for trigonometric and hyperbolic functions can share most of their code.

CORDIC is generally faster than other approaches when a hardware multiplier is unavailable (e.g., in a microcontroller based system), or when the number of gates required to implement the functions it supports should be minimized (e.g., in an FPGA).

On the other hand, when a hardware multiplier is available (e.g., in a DSP microprocessor), table-lookup methods and power series are generally faster than CORDIC. In recent years, the CORDIC algorithm is used extensively for various biomedical applications, especially in FPGA implementations.

Many older systems with integer-only CPUs have implemented CORDIC to varying extents as part of their IEEE Floating Point libraries. As most modern general-purpose CPUs have floating point registers with common operations such as add, subtract, multiply, divide, sin, cos, square root, log10, natural log, the need to implement CORDIC in them with software is nearly non-existent. Only microcontroller or special safety and time-constrained software applications would need to consider using CORDIC.

CORDIC can be used to calculate a number of different functions. This explanation shows how to use CORDIC in rotation mode to calculate sine and cosine of an angle, and assumes the desired angle is given in radians and represented in a fixed point format. To determine the sine or cosine for an angle β, the y or x coordinate of a point on the unit circle corresponding to the desired angle must be found. Using CORDIC, we would start with the vector v0:

In the first iteration, this vector would be rotated 45° counterclockwise to get the vector v1. Successive iterations will rotate the vector in one or the other direction by size decreasing steps, until the desired angle has been achieved. Step i size is arctan(1/(2i−1)) for i = 1, 2, 3, …. 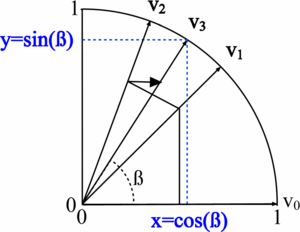 An illustration of the CORDIC algorithm in progress.

More formally, every iteration calculates a rotation, which is performed by multiplying the vector vi − 1 with the rotation matrix Ri:

The rotation matrix R is given by:

The expression for the rotated vector vi = Rivi − 1 then becomes:

where xi − 1 and yi − 1 are the components of vi − 1. Restricting the angles γi so that tan γi takes on the values

the multiplication with the tangent can be replaced by a division by a power of two, which is efficiently done in digital computer hardware using a bit shift. The expression then becomes:

and σi can have the values of −1 or 1 and is used to determine the direction of the rotation: if the angle βi is positive then σi is 1, otherwise it is −1.

We can ignore Ki in the iterative process and then apply it afterward by a scaling factor:

which is calculated in advance and stored in a table, or as a single constant if the number of iterations is fixed. This correction could also be made in advance, by scaling v0 and hence saving a multiplication. Additionally it can be noted that

to allow further reduction of the algorithm's complexity. After a sufficient number of iterations, the vector's angle will be close to the wanted angle β. For most ordinary purposes, 40 iterations (n = 40) is sufficient to obtain the correct result to the 10th decimal place.

The only task left is to determine if the rotation should be clockwise or counterclockwise at every iteration (choosing the value of σ). This is done by keeping track of how much we rotated at every iteration and subtracting that from the wanted angle, and then checking if βn + 1 is positive and we need to rotate clockwise or if it is negative we must rotate counterclockwise in order to get closer to the wanted angle β.

The values of γn must also be precomputed and stored. But for small angles, arctan(γn) = γn in fixed point representation, reducing table size.

As can be seen in the illustration above, the sine of the angle β is the y coordinate of the final vector vn, while the x coordinate is the cosine value.

The rotation-mode algorithm described above can rotate any vector (not only a unit vector aligned along the x axis) by an angle between -90° and +90°. Decisions on the direction of the rotation depend on βi being positive or negative.

The vectoring-mode of operation requires a slight modification of the algorithm. It starts with a vector the x coordinate of which is positive and the y coordinate is arbitrary. Successive rotations have the goal of rotating the vector to the x axis (and therefore reducing the y coordinate to zero). At each step, the value of y determines the direction of the rotation. The final value of βi contains the total angle of rotation. The final value of x will be the magnitude of the original vector scaled by K. So, an obvious use of the vectoring mode is the transformation from rectangular to polar coordinates.

The following is a MATLAB/GNU Octave implementation of CORDIC that does not rely on any transcendental functions except in the precomputation of tables. If the number of iterations n is predetermined, then the second table can be replaced by a single constant. The two-by-two matrix multiplication represents a pair of simple shifts and adds. With MATLAB's standard double-precision arithmetic and "format long" printout, the results increase in accuracy for n up to about 48.

The number of logic gates for the implementation of a CORDIC is roughly comparable to the number required for a multiplier as both require combinations of shifts and additions. The choice for a multiplier-based or CORDIC-based implementation will depend on the context. The multiplication of two complex numbers represented by their real and imaginary components (rectangular coordinates), for example, requires 4 multiplications, but could be realized by a single CORDIC operating on complex numbers represented by their polar coordinates, especially if the magnitude of the numbers is not relevant (multiplying a complex vector with a vector on the unit circle actually amounts to a rotation). CORDICs are often used in circuits for telecommunications such as digital down converters.

CORDIC is part of the class of "shift-and-add" algorithms, as are the logarithm and exponential algorithms derived from Henry Briggs' work. Another shift-and-add algorithm which can be used for computing many elementary functions is the BKM algorithm, which is a generalization of the logarithm and exponential algorithms to the complex plane. For instance, BKM can be used to compute the sine and cosine of a real angle x (in radians) by computing the exponential of 0 + ix, which is cos x + isin x. The BKM algorithm is slightly more complex than CORDIC, but has the advantage that it does not need a scaling factor (K).

Volder was inspired by the following formula in the 1946 edition of the CRC Handbook of Chemistry and Physics:

Some of the prominent early applications of CORDIC were in the Convair navigation computers CORDIC I to CORDIC III,[1] the Hewlett-Packard HP-9100 and HP-35 calculators,[4] the Intel 80x87 coprocessor series until Intel 80486, and Motorola 68881.[5]