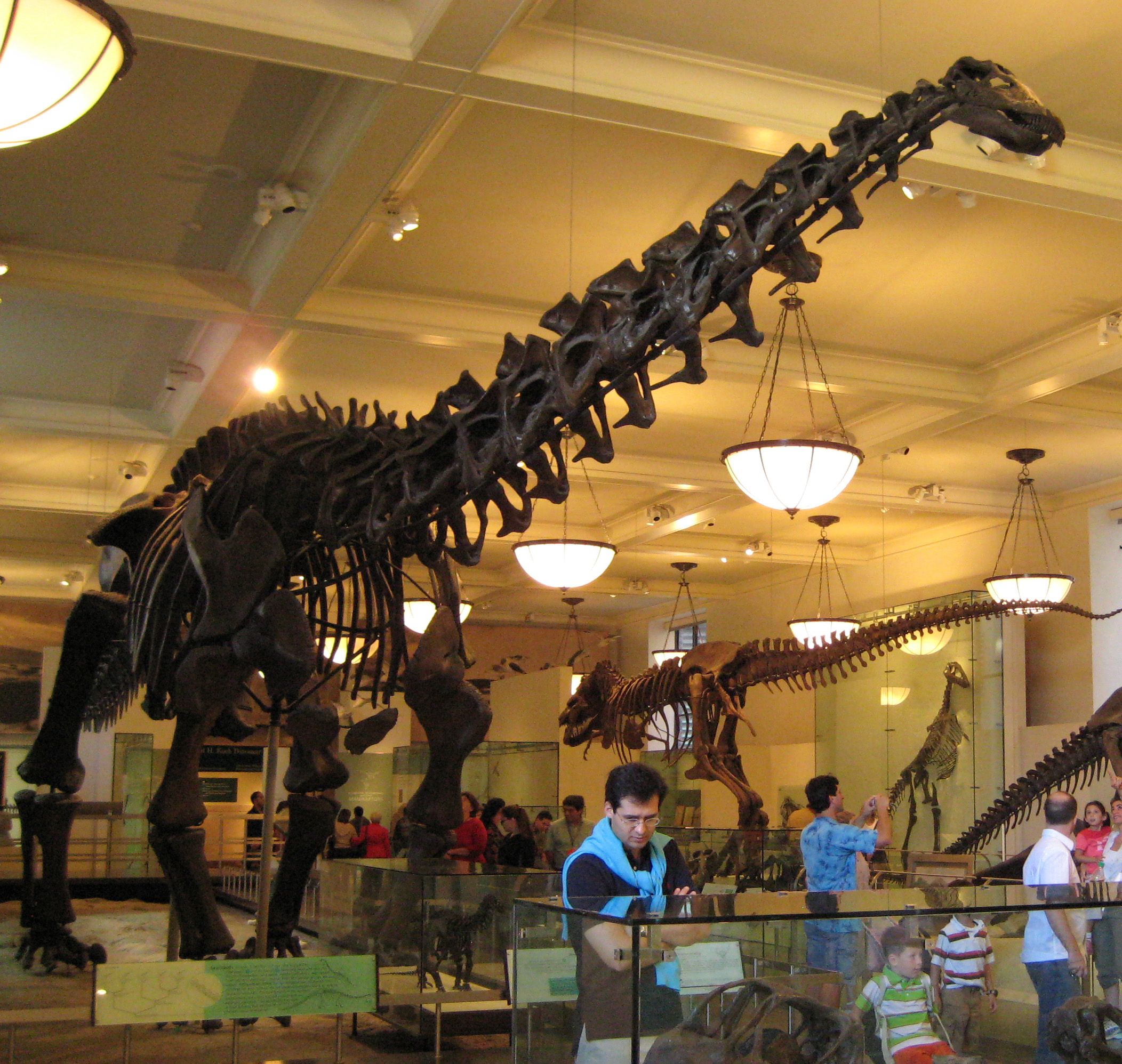 "Apatosaurus" (IPAEng|əˌpætəˈsɔrəs), also formerly known as "Brontosaurus", is a of that lived about 150 million years ago, during the Period ( and ages). It was one of the largest land s that ever existed, with an average length of 23 meters (75 ft) and a mass of at least 23 metric tons (25 short tons). The name "Apatosaurus" means 'deceptive lizard', so-given because the chevron bones were similar to those of a prehistoric marine , "". The name "Apatosaurus" comes from the Greek ἀπατέλος or ἀπατέλιος meaning 'deceptive' and Polytonic| meaning 'lizard'.

The cervical vertebrae were less elongated and more heavily constructed than those of "" and the bones of the leg were much stockier (despite being longer), implying a more robust animal. The tail was held above the ground during normal locomotion. Like most sauropods, "Apatosaurus" had only a single large claw on each forelimb, with the first three toes on the hind limb possessing claws.

Fossils of this animal have been found in Nine Mile Quarry and in and at sites in , and , USA.

"Apatosaurus" was a tremendously large long-necked al animal with a long whip-like tail. Its forelimbs were slightly longer than its hindlimbs. One measurement places the total length of "Apatosaurus" at 26 meters (85 ft) and its weight at 24-32 tons, roughly the weight of four elephants.

The skull was small in comparison with the size of the animal. The jaws were lined with spatulate teeth, which resembled chisels, suited to a herbivorous diet.

"Apatosaurus" is a member of the family , which also includes close relatives like "" and "", although it is not as closely related to these genera as they are to each other, and hence "Apatosaurus" is usually placed in its own subfamily, , along with its closest relatives "" and "".

made "A. yahnahpin" the type species of a new genus, "" in 1998, so it is now properly "Eobrontosaurus yahnahpin". It was named by Filla, James and Redman in 1994. One partial skeleton has been found in Wyoming. However, recently it has been argued that "Eobrontosaurus" belongs within "".

"Apatosaurus" is a member of the ae, a clade of gigantic s. The family includes some of the longest creatures ever to walk the earth, including "", "", "", and "". Within the Subfamily Apatosaurinae, "Apatosaurus" may be most closely related to "Suuwassea" and "Supersaurus".

, a Professor of at , described and named an incomplete (and juvenile) skeleton of "Apatosaurus ajax" in 1877. Two years later, Marsh announced the discovery of a larger and more complete specimen at &mdash; which, because of discrepancies including the size difference, Marsh incorrectly identified as belonging to an entirely new and . He dubbed the new species "Brontosaurus excelsus", meaning "thunder lizard", from the Greek brontē/βροντη meaning 'thunder' and sauros/σαυρος meaning 'lizard', and from the "excelsus", "to exceed in number", referring to the greater number of sacral vertebrae than in any other genus of sauropod known at the time.

The finds &mdash; the largest dinosaur ever discovered at the time and nearly complete, lacking only a head, feet, and portions of the tail &mdash; were then prepared for what was to be the first ever mounted display of a sauropod skeleton, at Yale's in 1905. The missing bones were created using known pieces from close relatives of "Brontosaurus". Sauropod feet that were discovered at the same quarry were added, as well as a tail fashioned to appear as Marsh believed it should, as well as a composite model of what he felt the skull of this massive creature might look like. This was not a delicate ""-style skull (which would later turn out to be more accurate [McIntosh, J.S. and Berman, D.S. (1975). "Description of the palate and lower jaw of the sauropod dinosaur "Diplodocus" (Reptilia: Saurischia) with remarks on the nature of the skull of "Apatosaurus"." "Journal of Paleontology", 49(1): 187-199.] ), but was composed of "the biggest, thickest, strongest skull bones, lower jaws and tooth crowns from three different quarries",

Despite the much-publicized debut of the mounted skeleton, which cemented the name "Brontosaurus" in the public consciousness, had published a paper in the 1903 edition of "Geological Series of the Field Columbian Museum" which argued that "Brontosaurus" was not different enough from "Apatosaurus" to warrant its own genus, and created the combination "Apatosaurus excelsus":

Despite this, at least one paleontologist &mdash; &mdash; argued in the 1990s that "A. ajax" and "A. excelsus" are in fact sufficiently distinct that the latter continues to merit a separate genus.

Early on, it was believed that "Apatosaurus" was too massive to support its own weight on dry land, so it was theorized that the sauropod must have lived partly submerged in water, perhaps in a swamp. Recent findings do not support this. In fact, like its relative "", "Apatosaurus" was a animal with a very long neck and a long tail that served as a counterweight. One study found that diplodocid necks were less flexible than previously believed, and that sauropods like "Apatosaurus" were adapted to low browsing or ground feeding.

In 2008, footprints of juvenile "Apatosaurus" were reported from Quarry Five in Morrison, Colorado. Discovered in 2006 by Matthew Mossbrucker, these footprints show that juveniles could run on their hind legs in a manner similar to that of the modern basilisk lizard.

In the early 20th century, diplodocids like "Apatosaurus" were often portrayed with their necks held high up in the air, allowing them to graze from tall trees. More recently, scientists have argued that the heart would have had trouble sustaining sufficient blood pressure to oxygenate the brain. Furthermore, more recent studies have shown that the structure of the neck vertebrae would not have permitted the neck to bend far upwards.

With such a large body mass, combined with a long neck, s encounter problems determining how these animals managed to breathe.

Beginning with the assumption that "Apatosaurus", like ns, did not have a diaphragm, the dead-space volume (the amount of unused air remaining in the mouth, trachea and air tubes after each breath) has been estimated at about 184 liters for a 30 ton specimen.

Its tidal volume (the amount of air moved in or out during a single breath) has been calculated based on the following s:
* 904 liters if avian
* 225 liters if mammalian
* 19 liters if reptilian.

On this basis, its could not have been reptilian, as its tidal volume would not have been able to replace its dead-space volume. Likewise, the mammalian system would only provide a fraction of new air on each breath. Therefore, it must have had either a system unknown in the modern world or one like birds, i.e. multiple air sacs and a flow-through lung. Furthermore, an avian system would only need a lung volume of about 600 liters compared to a mammalian requirement of 2,950 liters, which would exceed the available space. The overall thoracic volume of "Apatosaurus" has been estimated at 1,700 liters allowing for a 500-liter, four-chambered (like s, not three-chambered like s) and a 900-liter lung capacity. That would allow about 300 liters for the necessary tissue. Assuming "Apatosaurus" had an avian respiratory system and a reptilian resting-metabolism, it would need to consume only about 262 liters (69 gallons) of water per day.

It is not known how Apatosaurs ate enough food to satisfy their enormous bodies. It is likely that they ate constantly, pausing only to cool off, drink or to remove parasites. It is surmised that they slept standing upright. They likely relied on their enormous size and herd behavior to deter predators.

An article that appeared in the November 1997 issue of "" reported research into the mechanics of "Apatosaurus" tails by , a from . Myhrvold carried out a of the tail, which in diplodocids like "Apatosaurus" was a very long, tapering structure resembling a . This computer modeling suggested that sauropods were capable of producing a whip-like cracking sound of over 200 , comparable to the volume of a .

The length of time taken for Marsh's misclassification to be brought to public notice meant that the name "Brontosaurus", associated as it was with one of the largest dinosaurs, became so famous that it persisted long after the name had officially been abandoned in scientific use. The terms brontosaurus, brontosaurs, and brontosaurians (no capital 'B'; no italics) are often used to refer generically to any of the dinosaurs.

As late as 1989, the U.S. Post Office issued four "dinosaur" stamps, "", "", "Pteradon" (misspelling of "", which is a and not a dinosaur) and "Brontosaurus". The inclusion of these last two led to complaints of "fostering scientific illiteracy."

supported this position in his essay "Bully for Brontosaurus", though he echoed Riggs' original argument that "Brontosaurus" is a synonym for "Apatosaurus". Nevertheless, he noted that the creature has developed and continues to maintain an independent existence in the popular imagination.

Since the beginning of film history, "Brontosaurus" has been depicted in cinema. For example, the 1925 silent film "The Lost World" featured, using by , a battle between a "Brontosaurus" and an "". "King Kong" (1933) featured a "Brontosaurus", as did the 2005 remake, described using the fictional scientific name "Brontosaurus baxteri", or Baxter's Thunder-Lizard, after a character in the film. The brontosaur of the 2005 film is noticeably different from the modern view of "Apatosaurus", with a square head, low-hanging tail, and snake-like neck reminiscent of 1930s period depictions of the species in art.

*"", a closely related genus
*"", a book by
*Dinny the Dinosaur, a well-known "Brontosaurus" sculpture