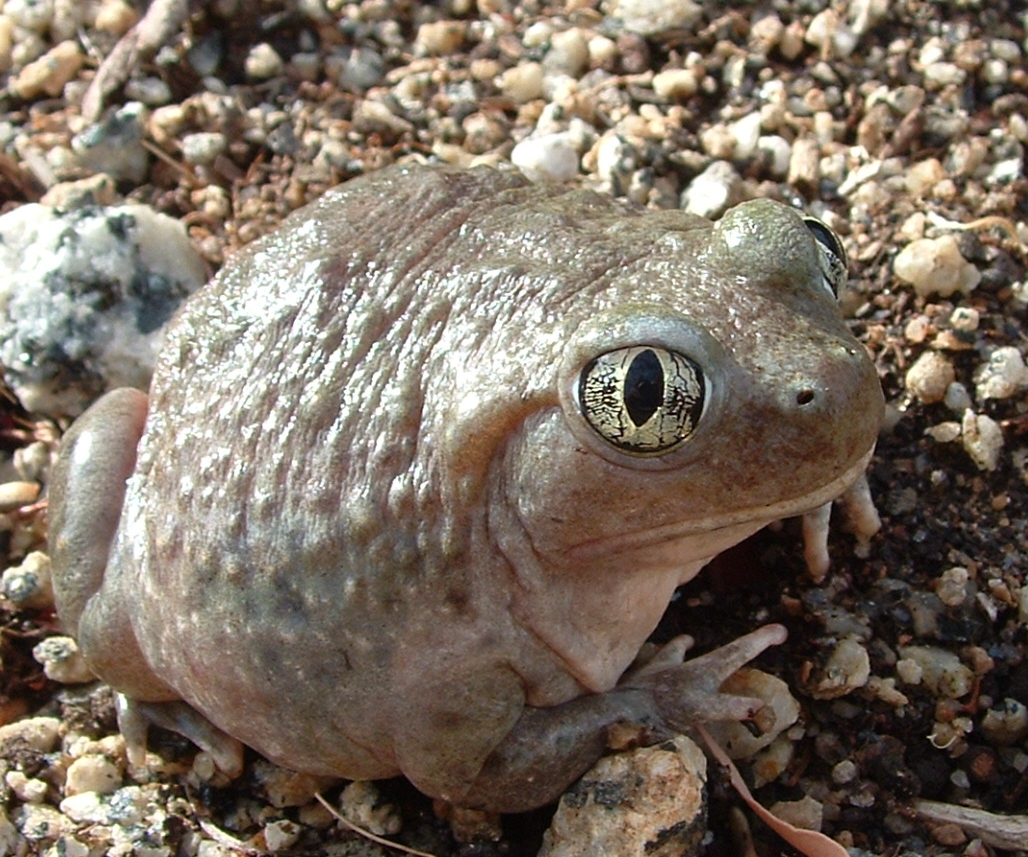 Amphibians (class Amphibia), such as s, s, s, s, , Sirens and s, are animals that from a juvenile, water-breathing form to an adult, air-breathing form. Typically, amphibians have four limbs. Unlike other land animals (), amphibians lay eggs in water, as their fish ancestors did. Amphibians are superficially similar to reptiles.

In recent decades, there has been a dramatic around the globe and many species are now threatened or extinct. Scientists do not agree on the cause.

Amphibians evolved in the . They were a top predator in the , but proto-crocodiles evolved and took over that niche.

Traditionally, amphibians have included all s that are not s . They are divided into three subclasses, of which two are only known as extinct subclasses:

Of these only the last subclass includes recent species.

With the revolution, this classification has been modified, or changed, and the Labyrinthodontia discarded as being a group without unique defining features apart from shared primitive characteristics. Classification varies according to the preferred of the author, and whether they use a stem-based or node-based classification. Generally amphibians are defined as the group that includes the common ancestors of all living amphibians (frogs, salamanders, etc) and all their descendants. This may also include extinct groups like the temnospondyls (traditionally placed in the disbanded subclass "labyrinthodontia"), and the Lepospondyls. This means that there are a now large number of basal and groups, described as "amphibians" in earlier books, that are no longer placed in the formal Amphibia.

All recent amphibians are included in the subclass Lissamphibia, superorder Salientia, which is usually considered a (which means that it is thought that they evolved from a common ancestor apart from other extinct groups), although it has also been suggested also that salamanders arose separately from a temnospondyl-like ancestor (Carroll, 2007).

Authorities also disagree on whether Salientia is a Superorder that includes the order Anura, or whether Anura is a sub-order of the order Salientia. Practical considerations seem to favour using the former arrangement now.

The actual number of species partly also depends on the taxonomic classification followed, the two most common classifications being the classification of the website AmphibiaWeb, University of California (Berkeley) and the classification by Darrel Frost and The American Museum of Natural History, available as the online reference database Amphibian Species of the World (see external links below). The numbers of species cited above follow Frost.

For the purpose of reproduction most amphibians are bound to have . A few tolerate , but there are no true amphibians. Several hundred frog species in adaptive radiations (e.g., "", the Pacific Platymantines, the Australo-Papuan microhylids, and many other tropical frogs), however, do not need any water whatsoever. They reproduce via direct development, an ecological and ary adaptation that has allowed them to be completely independent from free-standing water. Almost all of these frogs live in wet tropical rainforests and their eggs hatch directly into miniature versions of the adult, passing through the stage within the egg. Several species have also adapted to arid and semi-arid environments, but most of them still need water to lay their eggs. with single celled that lives in the jelly-like layer of the eggs has evolved several times. The larvae (tadpoles or polliwogs) breathe with exterior s. After hatching, they start to transform gradually into the adult's appearance. This process is called . Typically, the animals then leave the water and become terrestrial adults, but there are many interesting exceptions to this general way of reproduction.

The most obvious part of the amphibian metamorphosis is the formation of four legs in order to support the body on land. But there are several other changes:

* The gills are replaced by other respiratory organs, i.e., s.
* The skin changes and develops s to avoid .
* The eyes develop eyelids and adapt to vision outside the water.
* An is developed to lock the middle .
* In frogs and toads, the disappears.

Dramatic declines in amphibian populations, including population crashes and mass localized , have been noted in the past two decades from locations all over the world, and amphibian declines are thus perceived as one of the most critical threats to global . A number of causes are believed to be involved, including and modification, over-exploitation, , , , destruction of the (ultraviolet radiation has shown to be especially damaging to the skin, eyes, and eggs of amphibians), and diseases like . However, many of the causes of amphibian declines are still poorly understood, and are a topic of ongoing discussion. A to stem the crisis has been released in the form of the Amphibian Conservation Action Plan (available at www.amphibians.org). Developed by over 80 leading experts in the field, this call to action details what would be required to curtail amphibian declines and extinctions over the next 5 years - and how much this would cost. The Amphibian Specialist Group of the World Conservation Union (IUCN) is spearheading efforts to implement a comprehensive global strategy for amphibian conservation.

The first major groups of amphibians developed in the from fish similar to the modern where the fins had evolved into legs. These amphibians were around five meters long. The land was safe as the giant fish and sharks in the ocean could not come onto land. However, there were two problems with living out their entire lives on land. Primarily, the food that these amphibians consumed was in the water, but also at this point the skin on most of these amphibians was not water-tight.

In the , the amphibians moved up in the food chain and began to occupy the ecological position where we now find crocodiles. These amphibians were notable for eating the mega-insects on land and many types of fishes in the water. Towards the end of the and the , the amphibians started having competition with proto-crocodiles which led to their drop in size in the temperate zones or leaving for the poles. (Amphibians were able to hibernate during the winter whereas crocodiles could not, allowing the amphibians in higher latitudes protection from the reptiles.)

Paleontologists once believed that the kind of lifestyle and adaptations that proto-amphibians was similar to the modern .Fact|date=July 2007 (Mudskippers are not closely related to coelocanths.)