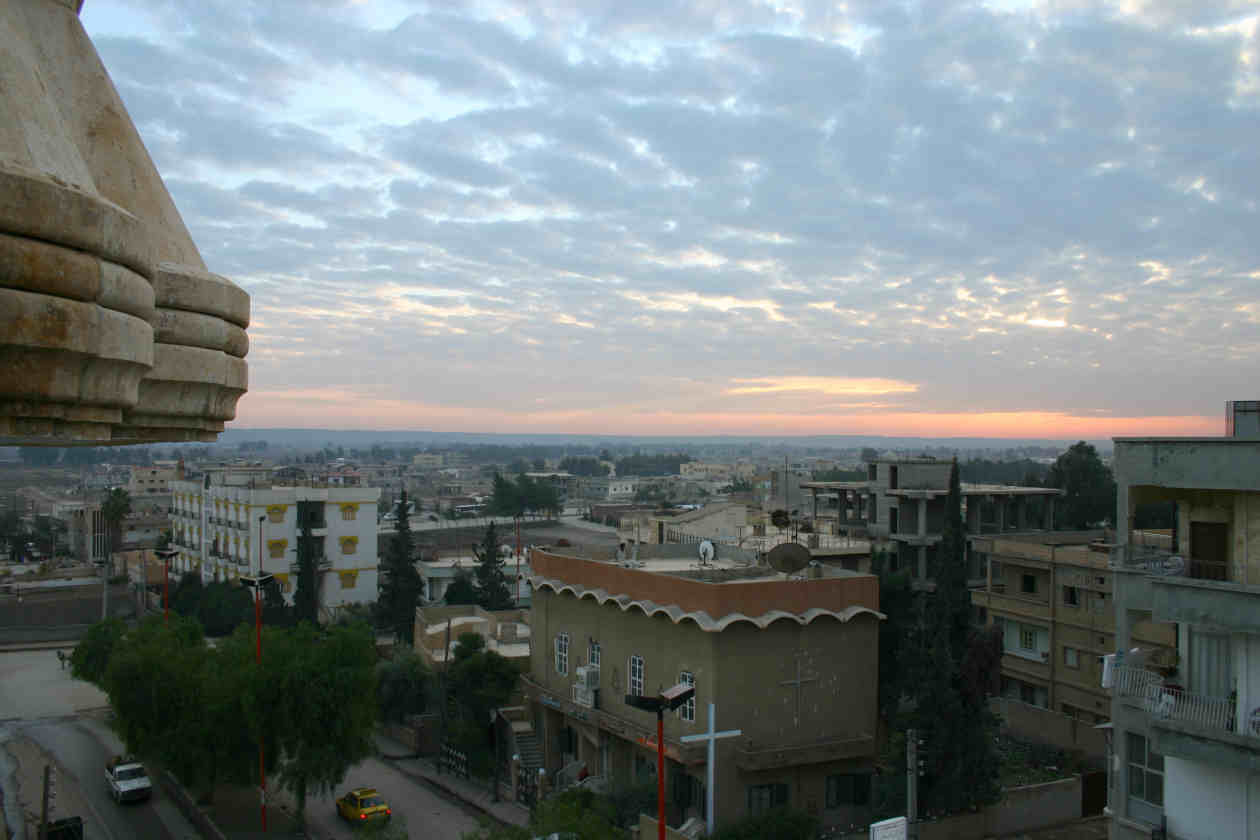 The Seleucid king Seleucos II Kallinikos (reigned 246-225 BC) founded ar-Raqqah as the eponymous city of Callinicum or Kallinikos. In the Byzantine period, the city was briefly named "Leontupolis" by the emperor Leo I (reigned 457-474 AD), but the name "Kallinikos" prevailed. In 542, the city was destroyed by the invasion of the Persian Sasanid Shahanshah Khusrau I Anushirvan (reigned 531-579), but was subsequently rebuilt by the Byzantine emperor (reigned 527-565).

In the 6th century, Kallinikos became a center of Syriac monasticism. Deir Mār Zakkā, or the Saint Monastery, sited on the just north of the city, today's Tall al-Bi'a, became renowned. A mosaic inscription there is dated to the year 509, presumably from the period of the foundation of the monastery. Deir Mār Zakkā is mentioned by various sources up to the 10th century. The second important monastery in the area was the Bīzūnā monastery or 'Dairā d-Esţunā', the 'monastery of the column'. In the 9th century, when ar-Raqqah served as capital of the western half of the empire, this monastery became the seat of the Syriac Patriarch of Antioch.

In the year 18/639, the Muslim conqueror 'Iyāḍ ibn Ghanm took the Christian city Kallinikos by contract. Since then, it figured in Arabic sources as ar-Raqqah, but still in Syriac sources the name of Kallinikos remained. In 20/640-1, the earliest congregational mosque in the Jazira was build in the predominantly Christian city. many companions of the Prophet used to live in ar-Raqqah.The strategic importance of ar-Raqqah grew during the wars at the end of the Umayyad period and the beginning of the 'Abbasid regime. Ar-Raqqah lay on the crossroads between Syria and Iraq and the road between Damascus, Tadmur (Palmyra), the temporary caliphal residence ar-Rusafa, ar-Ruha' (present day in Turkey) and the Byzantine and Caucasian theaters of raids and wars.

In 771-772 the built a garrison city about 200 metres to the west of ar-Raqqah for a detachment of his Khorasanian Persian army. It was named ar-Rāfiqah, "the companion". The strength of the Abbasid imperial military is still visible in the impressive city wall of ar-Rāfiqah.

Ar-Raqqah and ar-Rāfiqah merged into one urban complex, together larger than the former capital . In 796, the caliph decided for ar-Raqqah/ar-Rafiqah as his imperial residence. For about thirteen years ar-Raqqah/ar-Rāfiqah was the capital of the Abbasid empire stretching from Northern Africa to Central Asia, while the main administrative body remained in . The palace area of ar-Raqqah covered an area of about 10 square kilometres north of the twin cities. One of the founding fathers of the school of law, , was chief (judge) in ar-Raqqah. The splendour of the court in ar-Raqqah is documented in several poems, collected by Abu al-Faraj al-Isfahāni in his "Book of Songs" (Kitāb al-Aghāni). Only the small, restored so called Eastern Palace at the fringes of the palace district gives an impression of Abbasid architecture. 8 km west of ar-Raqqah lay the unfinished victory monument called "Heraqla" from the period of Harun al-Rashid. It is said to commemorate the conquest of the Byzantine city Herakleia in Asia Minor. Other theories connect it with cosmological events. Both theories must not contradict each other. The monument is preserved in a substructure of a square building in the centre of a circular walled enclosure, 500 m in diameter. However, the upper part was never finished, because of the sudden death of Harun al-Rashid in . After the return of the court to Baghdad in 809, ar-Raqqah/ar-Rāfiqah remained the capital of the western part of the empire including Egypt.

Decline and period of Bedouin domination

Ar-Raqqah's fate declined in the late 9th century because of the continuous warfare between the Abbasids and the and then with the Shii extremist movement, the . During the period of the in the 940s the city declined rapidly. At the end of the 10th century until the beginning of the 12th century, al-Raqqah was cantroled by Bedouin dynasties. The had their pasture in the Diyār Muḍar and the 'Uqailids had their center in .

Ar-Raqqah lived a second blossom, based on agriculture and industrial production, during the Zangid and Ayyubid period in the 12th and first half of the 13th century. Most famous is the blue-glazed so called , which can be seen in many Museums in the world. The still visible Bāb Baghdād (Baghdad Gate) and the so called Qasr al-Banāt (Castle of the Ladies) are splendid witnesses for this period. The famous ruler 'Imād ad-Dīn Zangī who was killed in 1146 was buried here initially.

Ar-Raqqah was destroyed during the wars in the 1260s. There is a report about the killing of the last inhabitants of the urban ruin in 1288.

In the 16th century, ar-Raqqah again entered the historical record as an Ottoman customs post on the Euphrates. The (province) ar-Raqqah (Ottoman form sometimes spelled as Rakka) was created, however the capital of this eyalet and seat of the vali was ar-Ruhā' (Edessa, present day Urfa in Turkey) about 200 km north of ar-Raqqah. In the 17th century the famous Ottoman traveller and author Evliyâ Çelebi only noticed Arab and Turkoman nomad tents in the vicinity of the ruins. The citadel was partially restored in 1683 and again housed a janissary detachment; over the next decades the province of Raqqah became the centre of the Ottoman Empire's tribal settlement (iskân) policy.The city of ar-Raqqah was resettled from 1864 onwards, first as a military outpost, then as a settlement for former Arabs and for , who came as refugees from the Caucasian war theaters in the middle of the 19th century.

In the 1950s, in the wake of the , the world wide cotton boom stimulated an unpreceded growth of the city, and the recultivation of this part of the middle Euphrates area. Cotton is still the main agricultural product of the region.

The growth of the city meant on the other hand a removal of the archaeological remains of the city's great past. The palace area is now almost covered with settlements, as well as the former area of the ancient ar-Raqqa (today Mishlab) and the former Abbasid industrial district (today al-Mukhtalţa). Only parts were archaeologically explored. The 12th-century citadel was removed in the 1950s (today Dawwār as-Sā'a, the clock-tower circle). In the 1980s rescue excavations in the palace area began as well as the conservation of the Abbasid city walls with the Bāb Baghdād and the two main monuments intra muros, the Abbasid mosque and the Qasr al-Banāt.

There is a museum, known as the , housed in an administration-building erected during the French Mandate.