Duck and Cover (film)
For other uses, see Duck and cover (disambiguation).

Duck and Cover is a civil defense film (sometimes also characterized as a social guidance film or propaganda) produced in 1951 (but first shown publicly in January 1952) by the United States federal government's civil defense branch shortly after the Soviet Union began nuclear testing. Written by Raymond J. Mauer and directed by Anthony Rizzo of Archer Productions and made with the help of schoolchildren from New York City and Astoria, New York, it was shown in schools as the cornerstone of the government's "duck and cover" public awareness campaign. The movie states that nuclear war could happen at any time without warning, and U.S. citizens should keep this constantly in mind and be ever ready.

The US government contracted with Archer to produce Duck and Cover. The film is now in the public domain, and as such is widely available through Internet download sources, as well as on DVD. 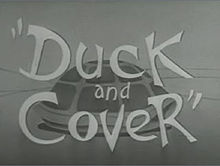 The title screen from the film.

The film starts with an animated sequence, showing an anthropomorphic turtle walking down a road, while picking up a flower and smelling it. A chorus sings the Duck and Cover theme: 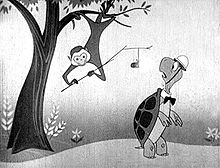 The significant scene before Bert ducks and covers.

While this goes on, Bert is attacked by a monkey holding a string from which hangs a lit stick of dynamite. Bert ducks into his shell in the nick of time, as the dynamite goes off and blows up both the monkey and the tree in which he is sitting. Bert, however, is shown perfectly safe, because he has ducked and covered.

The film, which is about 10 minutes long, then switches to live footage, as a narrator explains what children should do "when you see the flash" of an atomic bomb. The movie goes on to suggest that by ducking down low in the event of a nuclear explosion, the children would be safer than they would be standing, and explains some basic survival tactics for nuclear war.

After nuclear weapons were developed (the first having been developed during the Manhattan Project during World War II), it was realized what kind of danger they posed. The United States held a nuclear monopoly from the end of World War II until 1949, when the Soviets detonated their first nuclear device.

This signaled the beginning of the nuclear stage of the Cold War, and as a result, strategies for survival were thought out. Fallout shelters, both private and public, were built, but the government still viewed it as necessary to explain to citizens both the danger of the atomic (and later, hydrogen) bombs, and to give them some sort of training so that they would be prepared to act in the event of a nuclear strike.

The solution was the duck and cover campaign, of which Duck and Cover was an integral part. Shelters were built, drills were held in towns and schools, and the film was shown to schoolchildren. According to the United States Library of Congress (which declared the film "historically significant" and inducted it for preservation into the National Film Registry in 2004), it "was seen by millions of schoolchildren in the 1950s."

There is controversy from some people regarding the actual usefulness of the film. Since it has no counterpart in any other country (although the British film Protect and Survive is a much more blunt take on the same theme), it is sometimes regarded as being a red scare political tool, to make children frightened of the Soviet Union and communism.[1] Also questioned is the film's scientific accuracy; whether or not the tactics shown in the film (such as ducking into a doorway, putting a newspaper over your head, and even just throwing yourself face down on the ground) would actually work. While this (or any) tactic would be useless for someone at ground zero during a nuclear blast, it could be beneficial for those who are positioned away from the blast hypocenter: both the thermal pulse of some weapons and shrapnel from all weapons (particularly from shattered windows)[2] could be evaded. In particular, higher yield thermonuclear weapons have thermal pulses which last for several seconds. By promptly putting something between yourself and the fireball, you could avoid or reduce the severity of the burns you would have otherwise received. For those not at ground zero, there would be a delay between the flash (indicating the need to duck and cover) and the arrival of the blast wave, which could shatter windows and cause other blast or impact injuries (although electromagnetic radiation, such as infra-red and gamma rays, would arrive at the observer's position at the same time as the light flash, leaving the observer no time to find cover from these particular aspects of a nuclear detonation).

A newspaper would, at least in theory, block alpha radiation although skin does this anyway, provide some shielding from the heat (IR, visible and UV) radiation and small debris, though it would have no effect on the beta and gamma radiation or on the shockwave that would accompany an atomic detonation.

Although duck-and-cover drills are no longer held in United States schools and most fallout shelters have been closed down or abandoned, Duck and Cover, which was shown to an entire generation of children, is referenced in television shows and movies, usually in a context implying Duck and Cover is an example of camp.

However, many schools across the United States continue to use the "Duck and Cover" sheltering style in the event of tornadoes, earthquakes, and full lockdowns among other things.

The satirical animated series South Park lampooned Duck and Cover in the first season episode Volcano, as giving instructions on how to avoid hot lava. Another parody, "Atomic Holocaust," appeared in the animated film The Iron Giant.