Dahlia is a genus of bushy, tuberous, perennial plants native to Mexico, Central America, and Colombia. There are at least 36 species of dahlia, some like D. imperialis up to 10 metres tall.[3] Dahlia hybrids are commonly grown as garden plants. The Aztecs gathered and cultivated the dahlia for food, ceremonies, as well as decorative purposes,[4] and the long woody stem of one variety was used for small pipes.

Dahlias are used as food plants by the larvae of some Lepidoptera species including Angle Shades, Common Swift, Ghost Moth and Large Yellow Underwing.

The dahlia is named after Swedish 18th-century botanist Anders Dahl.[5] In German the dahlia was known during most of the 19th century as Georgia, being named after the naturalist Johann Gottlieb Georgi of St. Petersburg, Russia. 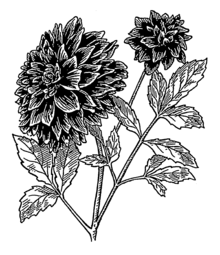 Illustration of a dahlia

Francisco Hernández visited Mexico in 1615 and noticed two spectacular varieties of dahlias, which he mentioned in his account of medicinal plants of New Spain, not published until 1651.[6] The French botanist Nicolas-Joseph Thiéry de Menonville, sent to Mexico to steal the cochineal insect valued for its scarlet dye, noted the strangely beautiful flowers he had seen in his official report, published in 1787.[7] Seeds sent from the botanical garden of Mexico City[8] to Madrid flowered for the first time in the botanical garden in October 1789, and were named Dahlia coccinea by Antonio José Cavanilles, the head of the Madrid Botanical Garden, in his Icones plantarum, 1791. A few seeds were secured by Lord Bute and sent to England, where they flowered but were lost.

The introduction of the dahlia to the florists of the Netherlands was effected about the same time, when a box of dahlia roots was sent from Mexico to the Netherlands. Only one plant survived the trip, but produced spectacular red flowers with pointed petals. Nurserymen in Europe crossbred from this plant, which was named Dahlia juarezii, with parents of dahlias discovered earlier: these are the progenitors of all modern dahlia hybrids. The Jardin des plantes in Paris received dahlias in 1802, again from Madrid.[9] A second species, D. variabilis, was at last successfully grown in 1804 by the gardener at Holland House, Kensington, of Lady Holland, who sent the seeds from Madrid. An early breeder of dahlias was comte Léon-Charles LeLieur de Ville-sur-Arce, intendant of the château de Saint-Cloud, its glasshouses and gardens, who had four varieties to work with,[10] and by 1806 had produced three double-flowered dahlias.

Since 1813, commercial plant breeders have been breeding dahlias to produce thousands of cultivars, usually chosen for their stunning and brightly coloured waxy flowers. Dahlia was named the national flower of Mexico in 1963.[11] Dahlia plants range in height from as low as 12 in (30 cm) to as tall as 6–8 ft (1.8–2.4 m). The flower heads can be as small as 2 in (5.1 cm) in diameter or up to 1 ft (30 cm) ("dinner plate"). The great variety results from dahlias being octoploids (they have eight sets of homologous chromosomes, whereas most plants have only two).

Dahlias grow naturally in climates which do not experience frost, consequently they are not adapted to withstand sub-zero temperatures. However their tuberous nature enables them to survive periods of dormancy, and this characteristic means that gardeners in temperate climates with frosts can grow dahlias successfully, provided the tubers are lifted from the ground and stored in cool yet frost-free conditions during the winter. Planting the tubers quite deep (10 – 15 cm) also provides some protection. When in active growth, modern dahlia hybrids perform most successfully in well-watered yet free-draining soils, in situations receiving plenty of sunlight. Taller cultivars usually require some form of staking as they grow, and all garden dahlias need deadheading regularly, once flowering commences. Slugs and snails are serious pests in some parts of the world, particularly in spring when new growth is emerging through the soil. Earwigs can also disfigure the blooms. The other main pests likely to be encountered are aphids (usually on young stems and immature flower buds), red spider mite (cause foliage mottling and discolouration, worse in hot and dry conditions) and capsid bugs (result in contortion and holes at growing tips). Diseases which may be found affecting dahlias include powdery mildew, grey mould (Botrytis cinerea), verticillium wilt, dahlia smut (Entyloma calendulae f. dahliae), phytophthora and some plant viruses.

Dahlias are often grown for judged shows. Awards are given for best in class and best in show. Traditionally, dahlias grown for shows have used intensive application of pesticides and inorganic fertilizers. More recently, however, competitive dahlia growers have used organic methods with equally good results.[12]

The dahlia is also known as Tenjikubotan (天竺牡丹) in Japanese, which literally means 'Peony of India'. According to the Japanese language of flowers, it means 'good taste'.