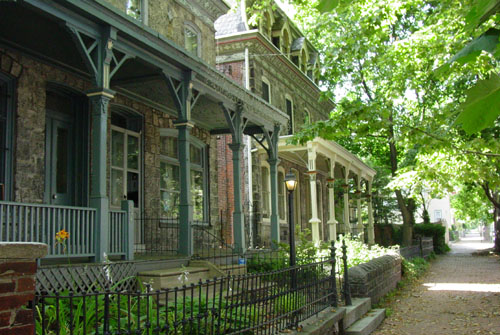 Powelton Village takes its name from the Powel Family, seventeenth- and eighteenth-century Welsh colonialists who held extensive estates in the area. As in other parts of West Philadelphia, in the late 1800s trolley lines opened the area up to urbanization. Powelton soon became a choice residential spot for Philadelphia industrial tycoons. Powelton's luster began to wane by the 1920s, and by the 1940s the neighborhood was populated by low-income families and infested with "bottom" gangs, whose members lived in a stretch paralleling Market St. known as the "Bottom." In the 1960s the Village was home to many members of the counterculture movement, and Powelton today enjoys a strong political activism and anarchist tradition, as well as a healthy multiethnic pluralism.

Commercial activity in Powelton is concentrated on Lancaster Avenue, particularly between 35th Street and 37th Street. The avenue is lined with shops, restaurants, and various other retail establishments. Many local businesses benefit from both Powelton residents and college students. Mad Greeks, Powelton Pizza, Village Pizza, California Pizza, and Ed's are all popular eating places. Lancaster Avenue near 36th Street has also become home to upscale Mexican and Thai restaurants. On the avenue near 37th are the newer Stan's Deli and Green Line Café.

Residential streets are mostly lined with Victorian twin houses, some of which are traditional family homes, while others have been subdivided into apartments. Detached houses, row houses, and apartment buildings also dot the neighborhood. An abundance of trees, many of which are historic, along with gardens maintained by many community residents, give the neighborhood a distinct feel. This aesthetic environment, along with the proximity to retail establishments and nearby universities, has resulted in increased home values in recent years, with some homes selling for several hundred thousand dollars.

The southern end of Powelton Village includes property owned by . Many students from Drexel live off-campus in Powelton's urban-structured row-house apartments because of the short walk to campus. The Powelton community has had a love-hate relationship with Drexel University. The Powelton Village Civic Association voices its members' concerns to local authorities. One of the members' concerns included the loss of their view of Center City, prompting Drexel University to limit the height of their new buildings.

Powelton is easily accessed by automobile and public transportation. The neighborhood is close to Interstate 76, and several major streets, including Market, Spring Garden, and 34th, cross the neighborhood. Bike lanes run along Haverford Avenue, Spring Garden Street and its bridge, Lancaster Avenue, and on 38th and 34th Streets south of Lancaster.

The neighborhood is close to two subway stops on the , located at 34th and Market and 40th and Market. Powelton is also easily accessed by trolley: the route 10 trolley runs on 36th Street between the Ludlow Street portal and Lancaster Avenue, continuing west on Lancaster Avenue. Additionally, there are two underground trolley stops close to Powelton: 33rd and Market, serving all trolley lines, and 36th and Sansom, serving all lines except route 10. Bus route 31 runs through the neighborhood, traveling north on 33rd, Baring, and 35th, and south on 37th, Baring, and 34th. Route 43 runs east on Spring Garden Street and west on Haverford Avenue. The neighborhood is adjacent to 30th Street Station, which serves all Northeast Corridor trains, the Atlantic City Line, and all Regional Rail lines, as well as the Market-Frankford Line and the subway-surface trolley lines.

Several art and photo galleries have opened along Lancaster Avenue from 36th to 40th. The Community Education Center, at 35th and Lancaster, holds various community events and gatherings. is located on Spring Garden Street between 31st and 32nd Streets. Nearby destinations include The Bridge, a movie theater at 40th and Walnut; a video rental store and bowling alley on Locust Street between 40th and 41st; and the Philadelphia Zoo at 34th and Girard.

One signature event is Lancaster Avenue's "Second Fridays," so named because it takes place on the second Friday of every month. Shops and galleries are open later and often have various specials, and the event often features live music.

Public education choices include the Samuel Powel Elementary School at 36th and Powelton, the Drew School at 37th and Lancaster, and University City High School at 36th and Filbert. The and both have significant presences in the neighborhood, as well as in adjacent areas to the south.

To serve these two universities, several hotels are located nearby, including the Sheraton, located at 36th and Chestnut. In Powelton proper, there are even a couple bed-and-breakfasts, including the Cornerstone at 33rd and Baring.