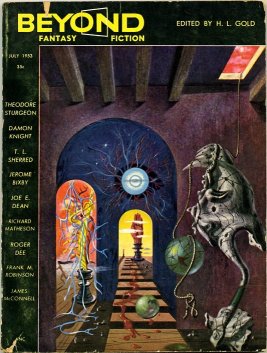 "Beyond Fantasy Fiction" was a US edited by , of which only ten issues were published, from 1953 to 1955. Although not a commercial success, it included several significant short stories by distinguished authors, such as , and .

James Gunn, a historian of science fiction, regarded the magazine as the best of the fantasy magazines launched in the early 1950s, and science fiction encyclopediast felt it printed very good material. Not every critic felt "Beyond" was completely successful, however; , in a 1963 review, commented that the stories were most successful when they did not try to emulate "Unknown".

"Beyond Fantasy Fiction" was a fantasy-oriented companion to the more successful "", which launched in 1950; "Beyond" had been planned by editor H. L. Gold from the time "Galaxy" was launched, but had to wait until "Galaxy" was firmly established.

The first issue featured , and . Other writers who appeared in the magazine included , , James E. Gunn, , (both under his own name and with under the joint pseudonym "Charles Satterfield"), , , , and .

The magazine was not commercially successful: at that time circulation figures were not required to be published annually, as they were later,

, reviewing an anthology drawn from the pages of "Beyond", was generally approving but commented that "Except for Budrys, Pohl, Brown and Sturgeon, these stories from "Beyond" are rather self-conscious. They are best when they are not trying to be like "Unknown"." Miller's assessment of the magazine overall was that it "made a pass at the same position [as "Unknown"] but didn't make it."

"Beyond"'s selection of stories has been described by a historian of sf Michael Ashley as "seeking to achieve … high quality fantasy fiction acceptable to all readers"; he adds that "Beyond" was more successful than "", a competitor in this niche, because Gold "had a clearer vision and was more determined … to achieve it. … despite sales problems, Gold persisted in publishing fiction that sought to stretch the boundaries of imagination."

Although no were presented in 1954, the 2004 World Science Fiction Convention awarded "Retro Hugos" for that year. Two "Beyond" stories appeared as runners-up: Sturgeon's "…And My Fear Is Great…" placed third in the novella category, and Cogswell's "The Wall Around the World" fifth in the novelette category. In addition, Gold placed fifth in the editor category, though this recognized his work at "Galaxy" as well as at "Beyond".

The publisher was Galaxy Publishing Corporation, New York. The magazine was initially titled "Beyond Fantasy Fiction", and this remained the title on the masthead throughout the ten-issue run. However, issue 9 changed the title to simply "Beyond Fiction" on the cover, spine, and table of contents. Issue 10 used the new, shorter title on the cover and spine, but reverted to "Beyond Fantasy Fiction" for the table of contents.

The magazine began as a 160-page digest, priced at 35 cents. The price stayed the same throughout the run, but the page count was cut to 128 for the eighth issue, September 1954. The magazine was bimonthly, but issues 9 and 10 did not carry month and year dates, which has led different bibliographers to catalogue them in different ways. However, the masthead for these issues indicates that the magazine remained bimonthly, and so they are now usually catalogued as November 1954 and January 1955, respectively; the copyright dates on the last two issues correspond to these dates. The volume numbering was completely regular; volume 1 had six numbers, and volume 2 ceased with its fourth number. The stories were printed in the two-column format usual to digest magazines.

A British edition of the magazine ran for four issues on a bimonthly schedule starting in November 1953 and finishing in May 1954. These copied the first four issues of the US version, with slightly cut contents. They were numbered 1 to 4 but were not dated. [Ashley, "Beyond Fantasy Fiction," p.110; Tuck, "Beyond Fantasy Fiction", p.549.] Ten years after the magazine folded, nine stories from "Beyond" were collected into the 160-page paperback "Beyond", published in 1963 by (F712) and edited by Thomas Dardis (who was not credited on the book).

* [http://isfdb.org/wiki/index.php/Magazine:Beyond_Fantasy_Fiction ISFDB: "Beyond Fantasy Fiction"] in