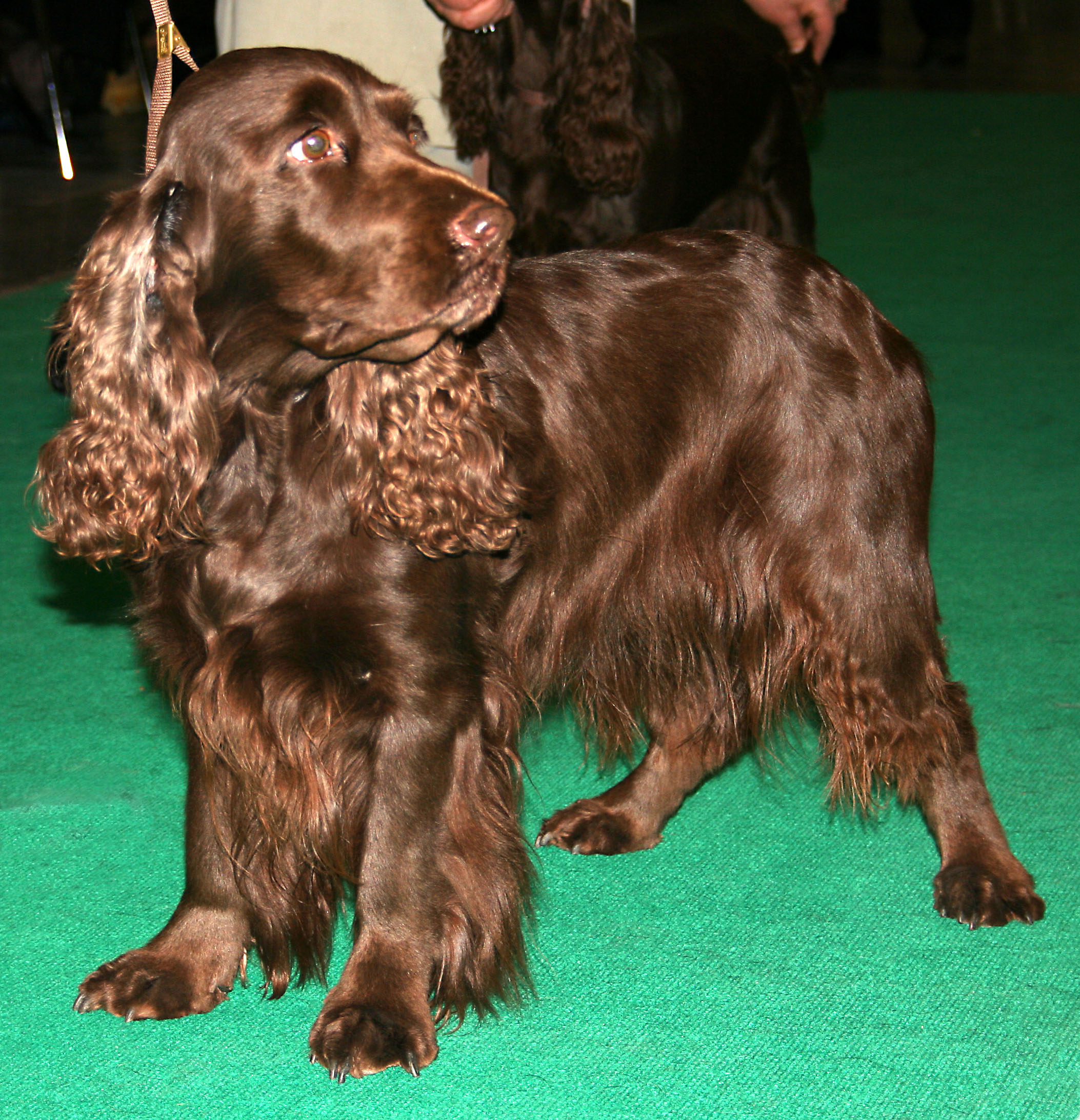 The Field Spaniel is 17–19 inches (43–48 cm) tall at the . Its long, silky coat comes in solid colours of liver and black. Tan points are allowed as is Roan, which is defined as a blend of both dark and white hairs without large patches of either colour. The Field Spaniel is somewhat longer than taller to a ratio of 7:8. The UK Kennel Club Breed Standard states Field Spaniels should weigh 18–25 kg (40–55 lb).

While the breed standard gives specific limits to the size of the dog, it seems that there is a vast difference between the European preference of size to the one in United States. While in US the idea is more or less "the smaller the better" in Europe, specially in the Northern Europe, the idea is "the bigger the better". However, the size difference between a male and female in Europe can be rather big. It remains the breeders and buyers consideration to decide which they like - or would they rather stay in the golden middle.

The Field Spaniel is a very social breed that can adapt to almost any lifestyle. Whilst they will coexist peacefully with dogs and cats, as a hunting dog, their instincts make them difficult around rabbits, mice, rats and similar animals. They can sometimes be difficult around birds but should adjust if socialised as a puppy. Fields Spaniels are a family breed and will show affection to all household members. However, they are naturally cautious of strangers making them an excellent watchdog. The Field Spaniel will not handle abusive situations and should never be treated as a guard dog.

Being a spaniel, the breed requires some grooming to keep a neat appearance and to prevent ear infections. Normally the head, face, ears, throat and feet are trimmed. Ear trimming is important in all spaniel breeds as the long ears prevent air circulation in the ear canal causing excessive moisture and infection. Fields Spaniels have webbed feet and excessive hair can also lead to excessive moisture and infection. Fields that are shown have more extensive grooming to present their conformation in the ring. In addition Field Spaniels for show may also have their feathering on the legs and undercarriage trimmed. Nails should never be allowed too grow long. An active Field Spaniel will naturally wear down nails however carpeting can sometimes prevent this.

The Field Spaniel was the first spaniel developed specifically for conformation showing. The breed developed at the time when dog showing was first coming into vogue. With most spaniels being a base colour with white splashes, breeders wanted to create a solid black dog. They bred every black spaniel of that time including s and the . Upon introduction, the Field Spaniel was an instant hit. The Field Spaniel enjoyed a burst of success quite early and quickly became a popular breed. The intense focus of show breeders on this breed led to a rapid demise of the original Field Spaniel. The dogs were crossed with s and s to produce low legged, long backed versions leading to tremendous health problems. Just as quickly as the Field Spaniels star rose in the show world, it fell once the myriad of genetic problems emerged.

On the brink of extinction, breeders worked to restore the Field Spaniel to its former glory. Crosses with s, under the watchful eyes of the English Kennel Club were made to increase the gene pool. Even though The Field Spaniel is now restored to normal, it has never achieved the same level of popularity and remains a rare breed. The Field is now seen more often in the show rings and in the field as a hunting companion.

It seems a bit difficult to actually say for sure where Field Spaniels came from, and what can be considered the start of the actual breed. According to another theory written down by an English breeder of second generation named Roger Hall Jones the Field Spaniel was a basic form of all ground ("field") spaniels like the Cocker Spaniel, English Springer Spaniel, Welsh Springer Spaniel, Clumber Spaniel and Sussex Spaniel. In the early show dog days there was a group of spaniels generally called "field spaniels". From this group started, according to this version, the development of specified spaniels, that excelled in different areas of hunting. What was left, was then officially named Field Spaniel.

However, the breed almost vanished from the face of the planet during the World Wars, as mentioned above, due to their decline in popularity caused by the crossing with Basset Hounds and Sussex Spaniels. There were only four dogs left that were of suitable quality for breeding after the wars. These four consisted of two females and two males, and the males were from the same litter. All field spaniels today are descendant of these four, but as mentioned above, breeding with English Springers was done to introduce new blood into the breed and to bring the breed back to its original form. [From Field Spaniels Compiled by Roger Hall Jones, Elbury Development Limited 1977]