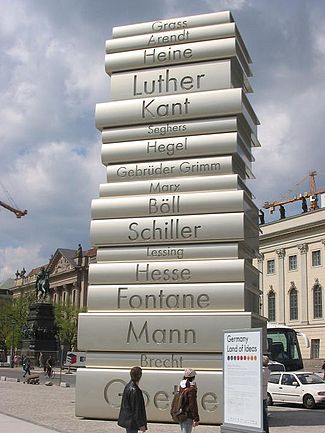 40ft stack of books sculpture at the Berlin Walk of Ideas, commemorating the invention of modern book printing

The Walk of Ideas was a set of six sculptures in central Berlin designed by Scholz & Friends[1] for the 2006 FIFA World Cup football event in Germany. The sculptures, part of a campaign called Welcome to Germany - the Land of Ideas, were put up between 10 March 2006 and 19 May 2006. The opening of the exhibition was covered by reporters for the international mass media. The sculptures were on display until September 2006.

The "boulevard of sculptures" was a central component of a public relations campaign called "Deutschland – Land der Ideen" (Germany – Land of Ideas). The campaign, under the patronage of the then German President, Horst Köhler, was a collaboration of the German government and the German business sector, (represented by the Federation of German Industries), whose purpose was to communicate a positive image of Germany both nationally and internationally.

The campaign’s corporate design, as well as the design of the sculptures was developed and realized by the Berlin design agency Scholz & Friends Identify. The agency has since received multiple awards for this campaign (such as the renowned German EVA Award in 2006[2]). The sculptures were placed on central squares (Bebelplatz and Gendarmenmarkt among others) in Berlin’s city center. Many politicians, members of the initiative or representatives of the companies involved held speeches at the small opening ceremonies accompanying the unveiling of the sculptures. The first sculpture to be unveiled was "Der modern Fußballschuh" (The Modern Football Boot), at Spreebogenpark on March 10, 2006. The final sculpture "Relativitätstheorie" (The Theory of Relativity) was unveiled and handed over on May 19, 2006 to the Berlin park Lustgarten. In autumn of 2006, the sculptures were removed again. One sculpture, “Das Automobil”, was transported to Munich; it is not certain if or how the other pieces of art have been recycled or otherwise used elsewhere.

From the planning stage to the finished pieces, the total cost per sculpture lay between 300,000 and 350,000 euros. The sculptures were all built using the modern synthetic material Neopor, and coated with a special brilliant white varnish. The production time for each sculpture was roughly two months, with the final assembly on site spanning 2–3 days.

The installation of the statue "Der moderne Buchdruck" (Modern Book Printing) took place on April 21, 2006 at Bebelplatz opposite Humboldt University. The assembly of this 12.2 metre high object on the street Unter den Linden took three days.

A steel structure held 17 different-sized shell segments together; each of them representing a single book. Including the stabilizing ballast weight, the tower ended up with an overall weight of 35 tons.

The 17 books were stacked on their sides and bore the names of German poets and writers on their spines; Goethe formed the base as the lowermost book. The sculpture was erected in remembrance of Johannes Gutenberg who invented the modern letterpress in Mainz around 1450 and created the first bestseller in history with the Gutenberg Bible. Of the originally approximately 180 copies of the first edition, 48 are known to still exist.

Here is the full list of names on each spine, beginning with the topmost book:

The ceremonial inauguration of the sculpture "Milestones of Medicine" took place on March 30, 2006 at the Friedrich-Ebert-Platz which is located just east of the Reichstag. It was in the shape of a pill and, with a diameter of 10 metres, was impossible to overlook on the waterside promenade of the Spree across the Marie-Elisabeth-Lüders-Haus which houses the Library of the German Parliament. The 25-ton sculpture was anchored below the pavement by a steel base which measured 4.20 × 4.20 × 1.00 metres.

The sculpture was intended to symbolise breakthrough pharmaceutical research, such as that done by Felix Hoffmann, Robert Koch, Emil Adolf von Behring, Paul Ehrlich or Gerhard Domagk. In 1897, pharmacist and chemist Felix Hoffmann managed to process acetylsalicylic acid (ASA) that was chemically pure and stable as well as well-tolerated for patients. The product came onto the market two years later under the name of Aspirin and constitutes the active ingredient of many other painkillers today. In 1950, Aspirin was listed in the Guinness Book of Records as the best-selling painkiller.

Additionally the giant pill on the Spree riverside was meant to be a reminder of medical equipment like the X-ray tube, the Cardiac catheter and dialysis which are German developments. Last but not least the pill symbolises Germany as one of the world leaders in pharmaceutics and medical technology.

The sculpture "Meisterwerke der Musik" (Masterpieces of Music) consisted of six individual notes, three quavers and three crotchets. Each note was 8.10 metres high, 5.4 metres long and 2.1 metres wide and weighed 8.6 tons, including the flag. According to the website Land der Ideen (Country of Ideas) the notes were, due to their static and geometric aspects, by far the most complicated construction of all six sculptures. A crane was used to assemble the individual parts, the note heads and stems, on May 5, 2006 at the Gendarmenmarkt.

The notes were intended to represent the importance of music for Germany - of composers like Bach, Beethoven, Brahms or Wagner, of pioneers like Karlheinz Stockhausen and of artists such as Anne-Sophie Mutter. The compositional work covers serious religious music and powerful symphonic pieces as well as a variety of cheerful elements. For example in "Kaffeekantate" Bach depicted a humorous scene exploring the bourgeois life of the middle class in Leipzig of that time.

In May 2006, the sculpture was relocated to the Schloßplatz in order to make room for the FIFA Fan Fest during the 2006 FIFA World Cup.

According to an announcement by the team behind the marketing campaign „Deutschland – Land der Ideen“, Professor Martin Winterkorn unveiled the sculpture in front of the Oriental Plaza business center in Beijing on November 18th 2006, the evening before the „Auto China 2006“ exhibition. The sculpture, Das Automobil, was on public display for 4 weeks. China's most prominent figures in society, sport, and culture were part of the approximately 250 invited guests at the unveiling, which, according to a news release, was a "spectacular show."

On March 10, 2006, the organisers of the "Boulevard of sculptures“ unveiled the first statue, "The Modern Football Boot" in the Spreebogenpark opposing the new central station. The sculpture was built by the company EDAG Ltd. in Fulda. It depicts a pair of modern soccer shoes, as developed by the Dassler family.

In 1953, Adi Dassler (the founder of Adidas) developed soccer shoes with flexible screw-in studs that provided a particularly firm grip on soft, rain-soaked ground. This development revolutionized soccer equipment. The German national soccer team wore these shoes during the World Cup which saw their victory in 1954 in Bern (Switzerland). The shoes are said to have contributed to their success. Otto Schily, former Federal Minister of the Interior and a member of the initiative's advisory committee, expressed his hopes for the upcoming World Cup 2006 after the unveiling: "Maybe Adidas has another "secret weapon" ready for this World Cup."

Each of the sculptured shoes was 14 metres long, 4.5 metres high and weighed around 20 tons. At the day of the unveiling, there was heavy snowfall in the area considering the season. Because of that, the Spreebogenpark looked more like a winter sports paradise than a green soccer turf.

Nowadays, Albert Einstein is seen by many as the epitome of a scientist and a genius. He also used his fame outside of the scientific community in his efforts to further international understanding and peace. In this context he also considered himself a pacifist, socialist and Zionist.

The sculpture consisted of three segments. It weighed ten tons, was twelve metres long and four metres high. The ceremonial unveiling in Berlin took place on May 19, 2006, in the Lustgarten on Museum Island.

Feedback from all over the world

The international media appreciated the initiative and took up the themes of the sculptures. On May 5, 2006, CCN broadcast a detailed report on the basic idea of the campaign. CNN reporter Chris Burns concluded: "The World Cup and the Walk of Ideas were a much-needed confidence boost for Germany, which has gone through a long period of depression with a high unemployment rate." The British daily The Times had already commented on the "Land of Ideas" on April 15, 2006: "The Germans are turning away from their traditional pessimism and are starting to be euphoric over their own country. Popsongs reflect this new national self-confidence. A new marketing campaign is selling Germany as "Land of Ideas". The center of Berlin is crammed with shining, metallic sculptures which represent Germany's most important inventions: There are gigantic aspirin pills as well as oversized Adidas soccer shoes."

The sculptures exhibited at the Walk of Ideas were sponsored by different corporations and their artistic value is considered to be highly controversial. Under the headline "Land of Ideas - devoid of ideas", the newspaper Berliner Zeitung complained about the "uncreative methods of promotion".

On April 21, 2006, the German daily TAZ headed the article "Corporations turn Berlin into a funfair". The article said: "The interests of the respective companies are barely concealed. A sculpture of a plastic car close to the Brandenburg Gate is obviously a representation of a new Audi model. The soccer shoes in the government district are triple-striped (like the Adidas design). An information board praises the inventiveness of Adidas founder Adolf Dassler. The square behind the German parliament is occupied by an oversized pill with a stylised cross which is the logo of the pharma corporation Bayer. Steffi Würzig, spokesperson of the initiative, admits that there is a great resemblance to the actual products. Klaus Lederer, leader of the Left Party in the Federal State of Berlin, put it more drastically: 'The image of the city is being degraded by a sculpture gallery exhibiting products of major corporations.'"

At least three of the sculptures - "Modern Printing", the "Theory of Relativity" and "Masterpieces of Music" - were (mostly) unsuspicious in regard to advertising. Although it was constantly stressed that the sculptures were made of Neopor, a plastic material produced by the company BASF, this was just a minor issue.[citation needed] Especially with the sculpture "Masterpieces of Music", faulty texts on the information panel and the official website posed a bigger problem. On the panel it was implied that Franz Schubert, the well-known Austrian composer, was a German musician – he was named on a list alongside with five German composers. This mistake, which caused quite some confusion at the time, has been corrected by the designers in the meantime.[citation needed]