Cesare Borgia (Spanish: César Borja, [ˈθe.sar ˈβor.xa]; 13 September 1475 or April 1476[1] – 12 March 1507), Duke of Valentinois,[2] was an Italian[3][4][5] condottiero, nobleman, politician, and cardinal. He was the son of Pope Alexander VI and his long-term mistress Vannozza dei Cattanei. He was the brother of Lucrezia Borgia; Giovanni Borgia (Juan), Duke of Gandia; and Gioffre Borgia (Jofré in Valencian), Prince of Squillace.[6] He was half-brother to Don Pedro Luis de Borja (1460–88) and Girolama de Borja, children of unknown mothers.

Like nearly all aspects of Cesare Borgia's life, the date of his birth is a subject of dispute. However, he was of Spanish descent. He was born in Rome—in either 1475 or 1476—to Cardinal Rodrigo de Lanzol y Borgia, soon to become Pope Alexander VI, and his mistress Vannozza dei Cattanei, about whom information is sparse. The Borgia family originally came from the Kingdom of Valencia, and rose to prominence during the mid-15th century; Cesare's great-uncle Alonso Borgia (1378–1458), bishop of Valencia, was elected Pope Callixtus III in 1455.[7] Cesare's father, Pope Alexander VI, was the first pope who was openly recognized to have children with a lover.

Stefano Infessura writes that Cardinal Borgia falsely claimed Cesare to be the legitimate son of another man—Domenico d'Arignano, the nominal husband of Vannozza de' Cattanei. More likely, Pope Sixtus IV granted Cesare a release from the necessity of proving his birth in a papal bull of October 1, 1480.[8]

Cesare was initially groomed for a career in the Church. He was made Bishop of Pamplona at the age of 15. Following school in Perugia and Pisa where Cesare studied law, along with his father's elevation to Pope, Cesare was made Cardinal at the age of 18.[7] Alexander VI staked the hopes of the Borgia family in Cesare's brother Giovanni, who was made captain general of the military forces of the papacy. Giovanni was assassinated in 1497 in mysterious circumstances: with several contemporaries suggesting that Cesare might be his killer,[9] as Giovanni's disappearing could finally open him a long-awaited military career; as well as jealousy over Sancha of Aragon, wife of Cesare's other brother Gioffre, and mistress of both Cesare and Giovanni.[10] Cesare's role in the act, however, has never been clear.

On August 17, 1498, Cesare became the first person in history to resign the cardinalate. On the same day the French King Louis XII named Cesare Duke of Valentinois, and this title, along with his former position as Cardinal of Valencia, explains the nickname "Valentino".

Cesare's career was founded upon his father's ability to distribute patronage, along with his alliance with France (reinforced by his marriage with Charlotte d'Albret, sister of John III of Navarre), in the course of the Italian Wars. Louis XII invaded Italy in 1499: after Gian Giacomo Trivulzio had ousted its duke Ludovico Sforza, Cesare accompanied the king in his entrance in Milan.

At this point Alexander decided to profit from the favourable situation and carve out for Cesare a state of his own in northern Italy. To this end, he declared that all his vicars in Romagna and Marche were deposed. Though in theory subject directly to the pope, these rulers had been practically independent or dependent on other states for generations. From the view of the citizens, these vicars were cruel and petty. When Cesare eventually took power, he was viewed by the citizens as a great improvement.

Cesare was appointed commander of the papal armies with a number of Italian mercenaries, supported by 300 cavalry and 4,000 Swiss infantry sent by the King of France. His first victim was Caterina Sforza (mother of the Medici condottiero Giovanni dalle Bande Nere), ruler of Imola and Forlì. Despite being deprived of his French troops after the conquest of those two cities, Borgia returned to Rome to celebrate a triumph and to receive the title of Papal Gonfalonier from his father. In 1500 the creation of twelve new cardinals granted Alexander enough money for Cesare to hire the condottieri, Vitellozzo Vitelli, Gian Paolo Baglioni, Giulio and Paolo Orsini, and Oliverotto da Fermo, who resumed his campaign in Romagna.

Giovanni Sforza, first husband of Cesare's sister Lucrezia, was soon ousted from Pesaro; Pandolfo Malatesta lost Rimini; Faenza surrendered, its young lord Astorre III Manfredi being later drowned in the Tiber river by Cesare's order. In May 1501 the latter was created duke of Romagna. Hired by Florence, Cesare subsequently added the lordship of Piombino to his new lands.

While his condottieri took over the siege of Piombino (which ended in 1502), Cesare commanded the French troops in the sieges of Naples and Capua, defended by Prospero and Fabrizio Colonna. On June 24, 1501 his troops stormed the latter, causing the collapse of Aragonese power in southern Italy.

In June 1502 he set out for Marche, where he was able to capture Urbino and Camerino by treason. The next step would be Bologna, but his condottieri, most notably Vitellozzo Vitelli and the Orsini brothers, fearing Cesare's cruelty, set up a plot against him. Guidobaldo da Montefeltro and Giovanni Maria da Varano returned to Urbino and Camerino, and Fossombrone revolted. The fact that his subjects had enjoyed his rule thus far meant that his opponents had to work much harder than they would have liked. He eventually recalled his loyal generals to Imola, where he waited for his opponents' loose alliance to collapse. Cesare called for a reconciliation, but imprisoned his condottieri in Senigallia, a feat described as a "wonderful deceiving" by Paolo Giovio,[11] and had them executed.

Although he was an immensely capable general and statesman, Cesare would have trouble maintaining his domain without continued Papal patronage. Niccolò Machiavelli cites Cesare's dependence on the good will of the Papacy, under the control of his father, to be the principal weakness of his rule, arguing that, had Cesare been able to win the favor of the new Pope, he would have been a very successful ruler. The news of his father's death (1503) arrived when Cesare was planning the conquest of Tuscany. While he was convalescing in Castel Sant'Angelo, his troops controlled the conclave. The new pope, Pius III, arrested him, he then broke out, and the accession of the Borgias' deadly enemy Julius II caused his final ruin.

While moving to Romagna to quell a revolt, he was seized and imprisoned by Gian Paolo Baglioni near Perugia. All his lands were acquired by the Papal States. Exiled to Spain in 1504, he was imprisoned in the Castle of La Mota, Medina del Campo, from which he escaped and joined his brother-in-law, King John III of Navarre. He was killed in 1507 while fighting for the Navarrese king in the city of Viana, Spain.

Borgia was originally buried in a marble tomb beneath the altar of the Church of Santa Maria in Viana with an inscription "Here lies in little earth one who was feared by all, who held peace and war in his hand." In 1537, the Bishop of Calahorra ordered the tomb destroyed and the remains transferred to an unconsecrated site outside the church. In 2007, Fernando Sebastian Aguilar, the Archbishop of Pamplona, allowed the remains to be moved back inside the church on the day before the 500th commemoration of Borgia's death. 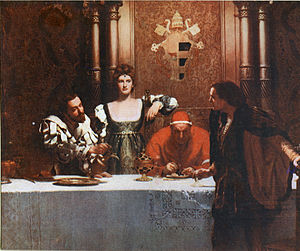 Niccolò Machiavelli met the Duke on a diplomatic mission in his function as Secretary of the Florentine Chancellery. Machiavelli was at Borgia's court from 7 October 1502 through 18 January 1503. During this time he wrote regular dispatches to his superiors in Florence, many of which have survived and are published in Machiavelli's Collected Works. In The Prince, Machiavelli uses Borgia as an example to elucidate the dangers of acquiring a principality by virtue of another. Although Cesare Borgia's father gave him the power to set up, Cesare ruled the Romagna with skill and tact for the most part. However, when his father died, and a rival to the Borgia family entered the Papal seat, Cesare was overthrown in a matter of months.

Machiavelli attributes two episodes to Cesare Borgia that were at least partially executed by his father: the method by which the Romagna was pacified, which Machiavelli describes in chapter VII of The Prince, and the assassination of his captains on New Year's Eve of 1503 in Senigallia.[12]

Machiavelli's use of Borgia is subject to controversy. Some scholars see in Machiavelli's Borgia the precursor of state crimes in the 20th Century.[13] Others, including Macaulay and Lord Acton, have historicized Machiavelli's Borgia, explaining the admiration for such violence as an effect of the general criminality and corruption of the time.[14] This seemingly makes it obvious that Machiavelli admired Cesare Borgia's father but not Cesare himself.

Cesare Borgia briefly employed Leonardo da Vinci as military architect and engineer between 1502 and 1503. Cesare and Leonardo became intimate instantaneously — Cesare provided Leonardo with an unlimited pass to inspect and direct all ongoing and planned construction in his domain. Before meeting Cesare, Leonardo had worked at the Milanese court of Ludovico Sforza for many years, until Charles VIII of France drove Sforza out of Italy. After Cesare, Leonardo was unsuccessful in finding another patron in Italy. François I of France was able to convince Leonardo to enter his service, and the last three years of da Vinci's life were spent working in France.

Cesare Borgia had wanted to take over Mantua while Isabella d'Este was ruling.

Cesare was also father to at least 11 illegitimate children, among them Girolamo Borgia, who married Isabella Contessa di Carpi, and Lucrezia Borgia, who, after Cesare's death, was moved to Ferrara to the court of her aunt, Lucrezia Borgia.

Cesare is the main antagonist of the video game Assassin's Creed: Brotherhood, acting as Captain-General of the Papal army in Rome and ordering an assault on the castle-town of Monteriggioni, home to the protagonist Ezio Auditore da Firenze. In the game Cesare has a stated desire to use both the Papal army and his family's political connections to usurp control over all of Italy.