Methyl salicylate (oil of wintergreen or wintergreen oil) is a natural product of many species of plants. Some of the plants which produce it are called wintergreens, hence the common name. 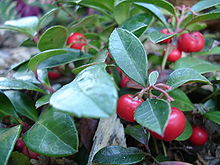 Plants producing it in significant amounts (readily detected by scent) include:

Methyl salicylate can be produced by esterifying salicylic acid with methanol. Commercial methyl salicylate is now synthesized, but in the past, it was commonly distilled from the twigs of Betula lenta (sweet birch) and Gaultheria procumbens (eastern teaberry or wintergreen). 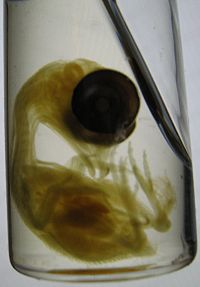 Methyl salicylate is used as a rubefacient in deep heating liniments (such as Bengay ointment), and in small amounts as a flavoring agent at no more than 0.04%.[3] It is also used to provide fragrance to various products and as an odor-masking agent for some organophosphate pesticides. If applied in too high quantities it can cause stomach and kidney problems.[4]

Methyl salicylate is among the compounds that attract male orchid bees, who apparently gather the chemical to synthesize pheromones; it is commonly used as bait to attract and collect these bees for study.[5]

Methyl salicylate has the ability to clear plant or animal tissue samples of color, and as such is useful for microscopy and immunohistochemistry when excess pigments obscure structures or block light in the tissue being examined. This clearing generally only takes a few minutes, but the tissue must first be dehydrated in alcohol.[citation needed]

Methyl salicylate, though its source plants are not true mints, is used as a mint in some kinds of chewing gum and candy, as an alternative to the more common peppermint and spearmint oils. It can also be found as a flavoring of root beer. It is also a potentially entertaining source of triboluminescence; when mixed with sugar and dried, it gains the tendency to build up electrical charge when crushed or rubbed. This effect can be observed by crushing wintergreen Life Savers candy in a dark room.[6][7]

Methyl salicylate can be used as a transfer agent, to produce a manual copy of an image on a surface.[8]

Methyl salicylate is added in small amounts to glacial acetic acid to lower its freezing point for transport in cold countries.

Methyl salicylate is used as a simulant or surrogate for the research of chemical warfare agent sulfur mustard, due to its similar chemical and physical properties.[9]

Methyl salicylate is one of several antiseptic ingredients in Listerine mouthwash produced by the Johnson & Johnson company. It is also used in the "Dencorub Extra Strength" heat cream, which is used to treat joint and muscular pain and is a product of the Dencorub company.

In pure form, methyl salicylate is toxic, especially when taken internally. A single teaspoon (5ml) of methyl salicylate contains 7g of salicylate,[10] which is equivalent to more than twenty-three 300 mg aspirin tablets. The lowest published lethal dose is 101 mg/kg body weight in adult humans,[11] (or 7.07 grams for a 70-kg adult). It has proven fatal to small children in doses as small as 4 ml.[3] A seventeen-year-old cross-country runner at Notre Dame Academy on Staten Island, died in April 2007, after her body absorbed methyl salicylate through excessive use of topical muscle-pain relief products.[12]

Most instances of human toxicity due to methyl salicylate are a result of over-application of topical analgesics, especially involving children. Some people have intentionally ingested large amounts of oil of wintergreen. Salicylate, the major metabolite of methyl salicylate, may be quantitated in blood, plasma or serum to confirm a diagnosis of poisoning in hospitalized patients or to assist in an autopsy.[13]