Ambassador
This article is about ambassadors in general. For other uses (including specific types of ambassadors), see Ambassador (disambiguation). For the Wikipedia Ambassador Program, see Wikipedia:Ambassadors. 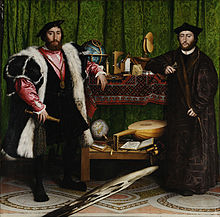 Hans Holbein the Younger: The Ambassadors, 1533. The life-sized panel portrays Jean de Dinteville and Georges de Selve, the ambassadors of Francis I of France.

An ambassador is the highest ranking diplomat who represents a nation and is usually accredited to a foreign sovereign or government, or to an international organization.

Sometimes countries also appoint highly respected individuals as Ambassador at Large who are assigned specific responsibilities, and they work to advise and assist their governments in a given area. The word is also often used more liberally for persons who are known, without national appointment, to represent certain professions, activities and fields of endeavor.

In everyday usage it usually applies to the ranking government representative stationed in a foreign capital. The host country typically allows the ambassador control of specific territory called an embassy, whose territory, staff, and even vehicles are generally afforded diplomatic immunity in the host country.

The senior diplomatic officers among members of the Commonwealth of Nations are known as High Commissioners, who are the heads of High Commissions. Representatives of the Holy See are known as Papal or Apostolic Nuncios, while the head of a Libyan mission is a "Secretary of the Libyan People's Bureau".[1]

The rise of the modern diplomatic system was a product of the Italian Renaissance ( from around 1300 AD ). The use of ambassadors became a political strategy in Italy during the 17th century. The political changes in Italy altered the role of ambassadors in diplomatic affairs. Because many of the states in Italy are small in size, they were particularly vulnerable to larger states. The ambassador system was used to disperse information and to protect the more vulnerable states.

Before taking office an Ambassador's credentials must be accepted. Harry Schwarz handing his credentials to President George H. W. Bush in 1991

This practice then spread to Europe during the Italian Wars. The use and creation of ambassadors during the 15th century in Italy has had long-term effects on Europe and, in turn, the world's diplomatic and political progression. Europe still uses the same terms of ambassador rights as they had established in the 16th century, concerning the rights of the ambassadors in host countries as well as the proper diplomatic procedures. An ambassador was used as a representative of the state in which he is from to negotiate and disseminate information in order to keep peace and establish relationships with other states. This attempt was employed in the effort to maintain peaceful relations with nations and make alliances during difficult times.

The use of ambassadors today is widespread. States and non-state actors use diplomatic representatives to deal with a host of problems that occur within the international system. Ambassadors now normally live overseas or within the country in which it is assigned to for long periods of time so that they are acquainted with the culture and local people. This way they are more politically effective and trusted, enabling them to accomplish goals that their host country desires.

Resident Coordinators of UN system are accredited to the Head of State and have the same rank.

Historically, officials representing their countries abroad were termed ministers, but this term was also applied to diplomats of the second rank. The Congress of Vienna of 1815 formalized the system of diplomatic rank under international law:

Ambassador-at-large is a diplomat of the highest rank and/or a minister who is accredited to represent his country. But unlike the resident ambassador (who is usually limited to a country) and/or embassy, the ambassador-at-large is entrusted to operate in several usually neighbouring countries, a region or sometimes a seat of international organizations such as the United Nations/European Union. In some cases, an ambassador-at-large may even be specifically assigned a role to advise and assist the state or Government in particular issues. Historically, presidents or prime ministers have designated special diplomatic envoys for specific assignments, primarily overseas but sometimes also within the country as ambassadors-at-large.

Among European powers, the ambassador extraordinary and plenipotentiary (French ambassadeur extraordinaire et plénipotentiaire or German außerordentlicher und bevollmächtigter Botschafter) was historically deemed the personal representative of the Sovereign, and the custom of dispatching ambassadors to the head of state rather than the government has persisted. For example, ambassadors to and from the United Kingdom are accredited to or from the Royal Court of St. James's (referring to St. James's Palace).

Because members of the Commonwealth of Nations have or had a common head of state, they do not exchange ambassadors, but instead have High Commissioners, who represent the government, rather than the head of state. In diplomatic usage, high commissioner is considered an equivalent rank and role to an ambassador.

While the title generally reflects the ambassador's second head position as head of a diplomatic mission, in some countries the term may also represent a rank held by career diplomats, as a matter of internal promotion, regardless of the posting, and in many national careers it is quite common for them to be appointed to other functions, especially within the ministry/ministries in charge of foreign affairs, in some countries in systematic alternation with actual postings.

The formal form of address for an ambassador is generally the form that would be used to address a head of state: "(Your/His/Her) Excellency" followed by name and/or the country represented. In many countries, less formal variations are frequently used, such as "Ambassador" followed by name, or the name followed by "Ambassador of...". In the United States, "Mr. Ambassador" may be used.

Ranking below full ambassador are the rank of Envoy, Minister Resident and Chargé d'affaires. They represent their government rather than their head of state. For further details, see diplomatic rank.

In French speaking regions such as France, Wallonia or Quebec, the title of ambassadeur person is used.