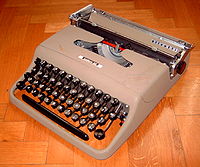 An Olivetti Lettera 22, circa 1950 designed by Marcello Nizzoli 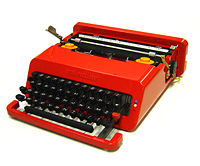 Olivetti S.p.A. is an Italian manufacturer of computers, printers and other business machines.

The company was founded as a typewriter manufacturer in 1908 in Ivrea, near Turin, by Camillo Olivetti. The firm was mainly developed by his son Adriano Olivetti. Olivetti opened its first overseas manufacturing plant in 1930, and its Divisumma electric calculator was launched in 1948. Olivetti produced Italy's first electronic computer, the transistorised Elea 9003, in 1959, and purchased the Underwood Typewriter Company that year. In 1964 the company sold its electronics division to the American company General Electric. It continued to develop new computing products on its own; one of these was Programma 101, the first commercially-produced personal computer.

Olivetti was famous for the attention it gave to design:

[A] preoccupation with design developed into a comprehensive corporate philosophy, which embraced everything from the shape of a space bar to the color scheme for an advertising poster.
—Jonathan Martin, International Directory of Company Histories

In 1952, the Museum of Modern Art held an exhibit titled "Olivetti: Design in Industry"; today, many Olivetti products are still part of the museum's permanent collection. Another major show, mounted by the Musée des Arts Décoratifs in Paris in 1969, toured five other cities.[1] Olivetti was also renowned for the caliber of the architects it engaged to design its factories and offices, including Le Corbusier, Louis Kahn, Gae Aulenti, Egon Eiermann, Figini-Pollini, Ignazio Gardella, BBPR, and many others.[2]

Olivetti paid attention to more than the importance of product design; graphic and architectural design were also considered pivotal to the company. Giovanni Pintori was hired by Adriano Olivetti in 1936 to work in the publicity department. Pintori was the creator of the Olivetti logo and many promotional posters used to advertise the company and its products.

Between 1955 and 1964 Olivetti developed some of the first transistorized mainframe computer systems, such as the Elea 9003. Although 40 large commercial 9003 and over 100 smaller 6001 scientific machines were completed and leased to customers to 1964, low sales, loss of two key managers and financial instability caused Olivetti to withdraw from the field in 1964.

In 1965 Olivetti released the Programma 101, considered the first commercial desktop personal computer. It was saved from the sale of the computer division to GE thanks to an employee that one night changed the internal categorization of the product from "computer" to "calculator", leaving the small team in Olivetti and creating some awkward situations in the office, that space was now owned by GE[4]. 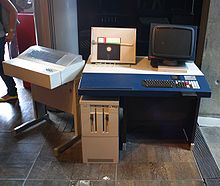 The Olivetti M24 was a successful product and became a reference in Europe. However, as Intel moved on to the faster Intel 386 CPU, Olivetti failed to deliver reliable new products based on the new processor.

Olivetti also sold quasi-portable 8086/8088-based PCs with an integrated keyboard and one or two integrated 3.5" floppy disk drives, running DOS 3.27, an Olivetti OEM version of PC-DOS 3.20 with minor improvements.

Olivetti did attempt to recover its position by introducing the Envision in 1995,[6] a full multimedia PC, to be used in the living room; this project was a failure, and it might have been too advanced for its time.[citation needed] Packard Bell managed to successfully introduce a similar product in the U.S. but only some years later.[citation needed] The main problem of the company was its inability to conjugate innovation with the quality standards it had committed itself to, at a time when the margins on the PC market were diminishing as not only the market but also the number of PC clone producers grew.[citation needed] The company continued to develop personal computers until it sold its PC business in 1997.

End of Olivetti as a separate company

In 1990's Olivetti was in great difficulty in its computer businesses reportedly because of the competition from US vendors. It was on the brink of collapse and had needed government support to stay afloat. A company in transition, it had moved out of the typewriter business into personal computers before embracing telecoms between 1997 and 1999. In the process it had lost around three-quarters of its staff.

In 1999, The Luxembourg-based company Bell S.A. acquired a controlling stake in Olivetti, but sold it to a consortium including the Pirelli and Benetton groups two years later. Surprisingly, Olivetti then launched a hostile bid for Telecom Italia in February 1999. Olivetti was less than a seventh of the size of its target. In a take-over battle against Deutsche Telekom, and other potential bidders, Olivetti won out and controlled 55% of former monopoly Telecom Italia, Italy's #1 fixed-line and mobile phone operator. However, the ownership structure of the merged Olivetti / Telecom Italia was complex and multi-layered with Olivetti took on around $16 billion of extra debt. It was then referred to as the "Olivetti/Telecom Italia affair" because of the unpleasant secret affairs behind.

A 2003 reorganization turned the tables, however, and now Olivetti is the office equipment and systems services subsidiary of Telecom Italia. In 2003 Olivetti was absorbed into the Telecom Italia group, maintaining a separate identity as Olivetti Tecnost.

Rebirth and resumption of computer production

In 2005, Telecom Italia decided to re-launch the company in the information technology sector, investing €200 million; at first restoring the original Olivetti brand, then replacing it with Olivetti Tecnost in 2003. In 2007, Olivetti launched the "LINEA_OFFICE", designed by Jasper Morrison for Olivetti; a new line of PCs, notebooks, printers, FAXs and calculators. Olivetti today operates in Italy and Switzerland, and has sales associates in 83 countries. Research and development are located in Agliè, Arnad, Carsoli, and Scarmagno in Italy, and Yverdon, Switzerland.