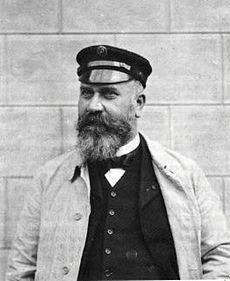 Clément-Bayard was a French manufacturer of automobiles, aeroplanes and airships founded in 1903 by the entrepreneur Adolphe Clément-Bayard (née Adolphe Clément).[1][2] The name celebrated the Chevalier Pierre Terrail, seigneur de Bayard who saved the town of Mézières in 1521. A statue of the Chevalier stood in front of the Mézières factory, and the image was incorporated into the company logo.[3][4][1]

From 1903 Clément-Bayard automobiles were built in a 'state of the art' factory at Mézières, known as La Macérienne, which Clément had designed in 1894 mainly for building bicycles.

Aircraft test flights began in 1908 and Louis Capazza's 'planeur (glider) Clément-Bayard' was unveiled in L'Aérophile on 15 May 1908.[5][6] Clément-Bayard also built Alberto Santos-Dumont's Demoiselle No 19 monoplane that he had designed to compete for the Coupe d'Aviation Ernest Archdeacon prize from the Aéro-Club de France. It was the world's first series production aircraft and by 1909 Clement-Bayard had the license to manufacture Wright engines alongside their own design.[5]

In 1908 'Astra Clément-Bayard' began manufacturing airships at a new factory in La Motte-Breuil.[1]

In 1914 the factory La Macérienne at Mézières was seized by the advancing German army and automobile production in Levallois-Perret, Paris, was suspended as the factory was turned over to war production, military equipment and military vehicles, aero engines, airships and planes.[5]

In 1922 the company was broken up and the factory in Paris was taken over by Citroën.[1][7] 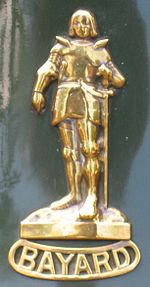 Clément Bayard emblem on the front of a 1907 automobile 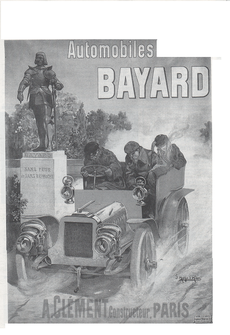 c.1905 publicity image of Clément-Bayard showing the statue of the Chevalier Bayard that stood in front of the factory at Mézières and formed the company logo

In 1896 Adolphe Clément was associated with Lord Charles Chetwynd-Talbot, 20th Earl of Shrewsbury and (yet to be convicted) fraudster Harry John Lawson of the British Automobile Commercial Syndicate Ltd.[8] They bought the Gladiator Cycle Company, a French manufacturer of bicycles which had been founded by Alexandre Darracq and Paul Aucoq in 1891 at Le Pré-Saint-Gervais in north east Paris.[9][10] They then merged the Gladiator Cycle Company into a major bicycle manufacturing conglomerate of Clément, Gladiator & Humber (France) Ltd. In 1897 BACS was the first of many of Lawson's ventures to collapse,[8] but Clément remained a director of 'Clément- Gladiator'.[10] The range was expanded, and in 1902 a motorised bicycle led to cars and motorcycles.(See Clément Gladiator cycles for further details)[2][9][8]

Clément-Gladiator was divided in 1903, such that Lord Charles Chetwynd-Talbot founded the English arm "Clément-Talbot Ltd" with Clément's financial backing, and in parallel Clément also formed Clément-Bayard at Mézières (now Charleville-Mézières).[11] He chose the name Bayard in commemoration of the Chevalier Pierre Terrail, seigneur de Bayard who saved the town of Mézières in 1521. A statue of the Chevalier stood in front of the Mézières factory, and the image was incorporated into the company logo.[1][9] After the split both marques built very similar cars, but the specifications gradually diverged. Initially, Clément-Bayard cars were imported to Britain under the Talbot brand.

In 1910 Clément-Bayard started to manufacture a stylish, low cost, small, two-seater roadster, with a 4-cylinder 10/12 hp, and a heater for the driver and passenger. It was very popular and production continued until the outbreak of war in 1914.[5]

By 1913 the factories of Levallois and Mezieres were focused on the production of a wide range of products including car chassis, car bodies, cars, trucks, airships, airplanes, motors, canoes, bicycles, engines and generators.[5]

On the front page of the 15 November 1913 edition of the Revue de l’industrie automobile et aéronautique (Review for Automotive and Aerospace Industry) Clément-Bayard announced a new 4 cylinder 30-40 Hp motor.[5]

By early 1914 Clément-Bayard had a complete range of twelve models, from two to six seats, equipped with engines ranging from a small 7 hp twin cylinder for less than 7000 francs to a big 6 cylinder 30 Hp unit. Additionally there was a 20 Hp four cylinder 'valveless' (Sleeve valve) Knight engine which was licensed from Panhard et Levassor.[5]

In 1914 the factory La Macérienne at Mézières was seized by the advancing German army and automobile manufacture in Levallois-Perret, Paris, was suspended as the factory was turned over to war production: military equipment; military vehicles; aero engines; airships; and planes.[5]

Albert Clément finished 10th at the I Eliminatoires Françaises de la Coupe Internationale, held at the Forest of Argonne on 20 May 1904. This was an eliminating contest for the French entry into the Coupe Internationale (Gordon Bennett Race) where only three cars were allowed per country. Clement finished the 6 lap, 532.79 km event in 7 hours 10 minutes 52.8 seconds. His team-mates Jacques Guders and Rene Hanriot failed to complete a single lap.[12]

Clément drove his Clement-Bayard into third place at the III Circuit des Ardennes race at Bastogne, on 25 July 1904. He completed the 5 lap, 591.255 km event in 6 hours 34 minutes 43.2 seconds. His team-mates Jacques Guders and Rene Hanriot both abandoned after four laps.[12] 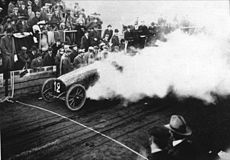 Albert Clément retired his Clement-Bayard with overheating after 1 lap of the II Eliminatoires Françaises de la Coupe Internationale at the Auvergne on 16 June. This was a qualifier for the Coupe Internationale (Gordon Bennett Race). Clement's team-mate Rene Hanriot finished tenth in 8 hours 23 minutes 39.6s but failed to qualify, whilst Marc-Philippe Villemain retired after three laps. [13]

Clément retired his Clement-Bayard after the first 166km lap of the II Coppa Florio at Brescia Italy on 4 September 1905. His team-mate 'Carlès' retired after 2 laps.[13]

Clément-Bayard entered 3 cars for the inaugural 1906 French Grand Prix at Le Mans where Clément finished third in his 100Hp machine. He completed the 1,238km event in 12 hours 49 minutes 46.2seconds. Clément led the race at the end of laps 2 and 5 on the second day.[16][14] Punctures were common and tyre manufacturer Michelin introduced a detachable rim with a tyre already affixed, which could be swapped in about 4 minutes car after a puncture, saving 11 minutes over manually replacing the tyre. These wheels were used by Felice Nazzaro on his FIAT enabling him to wrest second place from Clément on the second day. His father Adolphe was the owner of Dunlop France. Clement's team-mates "De la Touloubre" and A. Villemain retired their 100Hp models after 3 and 5 laps respectively.[14]

Albert Clément died while practising for the 1907 French Grand Prix on 17 May. Of the 3 other Clément-Bayard entries, Pierre Garcet and Elliott Shepard, finished 7th and eighth respectively. Clément's car was entered by 'Alezy' who retired after 4 laps.[1]

The company entered 3 cars for the 1908 French Grand Prix which had 12,963 cc six-cylinder overhead camshaft, and Victor Rigal finished 4th.[11]

Maurice Clement at the controls of the 1908 Clement Bayard biplane.

Clément-Bayard was an early French manufacturer of aircraft engines and lighter-than-air vehicles, with the earliest flights occurring in 1908. Clément-Bayard created the world's first series production aircraft.[5]

The company also started working with Alberto Santos-Dumont in 1908 to build his Demoiselle No 19 monoplane that he had designed to compete for the Coupe d'Aviation Ernest Archdeacon prize from the Aéro-Club de France. The plane was small and stable, but they planned a production run of 100 units, built 50 and sold only 15 for 7,500 francs for each airframe. It was the world's first series production aircraft. By 1909 it was offered with a choice of 3 engines, Clement 20 hp; Wright 4-cyl 30 hp (Clement-Bayard had the license to manufacture Wright engines); and Clement-Bayard 40 hp designed by Pierre Clerget. It achieved 120 km/h.[5]

Pierre Clerget designed a range of Clement-Bayard aircraft engines including a 7-cylinder supercharged radial, the 4-cyl 40 hp used on the Demoiselle, a 4-cyl 100 hp used on 'Hanriot Etrich' monoplanes, and a V8 200 hp airship engine.[5]

In 1910 the Clement-Bayard Monoplane No. 1 was introduced at the Paris show.[5]

In November 1912 the Clement-Bayard Monoplane No. 5 was introduced. It was powered by a Gnome 7 cylinder rotary engine producing 70 hp (52 kW). The pilot sat in an aluminium and leather tub.[5]

In 1913 a three-seater biplane was introduced as part of the military project, the Clement-Bayard No. 6. It was configured for two observers in front of the pilot, and was powered by either a 4-cyl 100 hp (75 kW) Clement-Bayard or 4-cylinder Gnome engine.[5]

In 1914 Clément-Bayard produced a steel scouting monoplane powered by either an 80 hp (60 kW) motor or a 100 hp (75 kW) Gnome et Rhône engine. The nickel steel armour was designed for protection against rifle fire.[20][21] 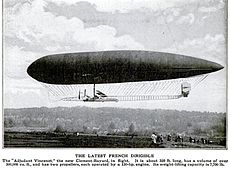 Clement-Bayard Airship No 1, The "Adjudant Vincenot" circa 1910. Caption from Popular Mechanics magazine 1910

In 1908 'Astra Clément-Bayard' began manufacturing airships at a new factory in La Motte-Breuil in response to a French Army decision to commence airship operations.

The Clément-Bayard No.1 airship was offered to the French government but was too expensive so it was bought by Tsar Nicholas II for the Russian army.

In 1910 the Clément-Bayard No.2, piloted by Maurice Clément, was the first airship to cross the Channel, travelling over 380 km in 6 hours.[1] The army ordered 3 copies.

The airship hangar in La Motte-Breuil is still maintained by Clément-Talbot Ltd.

Adolphe Clément ceded control of Clément-Bayard to his son Maurice in early 1914, but the consequences of World War I for the company were disastrous. The La Macérienne factory at Mézières was lost to the Germans, the machinery was shipped back to Germany, and the forges, foundries and smelter were destroyed. The gutted building was used as an indoor riding school for German officers.[5]

Automobile production at Levallois-Perret in Paris was suspended in August 1914 and the factory was turned over to war production, military equipment and military vehicles, aero engines, airships and planes.[5]

In 1922 the Clément-Bayard automobile company was sold to André Citroën, in whom Adolphe Clément also invested financially, and the factory at Levallois-Perret became the centre of 2CV manufacturing for the next 40 years.[1]