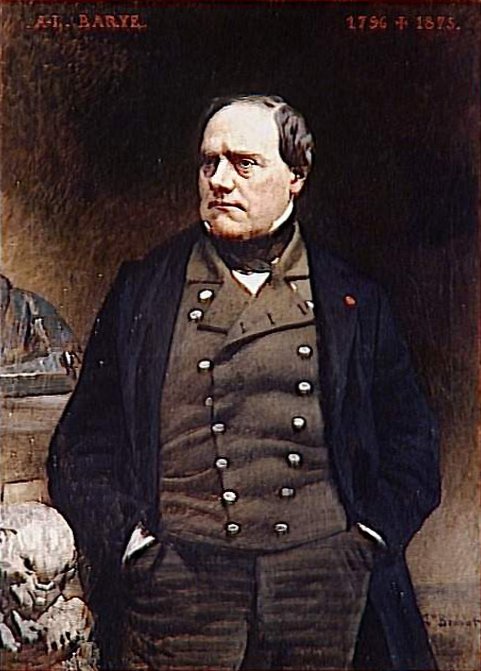 Antoine-Louis Barye (, -, ) was a French sculptor most famous for his work as an .

Born in , Barye began his career as a , like many sculptors of the Romantic Period. After studying under sculptor Francois-Joseph Bosio and painter Baron Antoine-Jean Gros he was in 1818 admitted to the . But it was not until 1823, while working for Fauconnier, the goldsmith, that he discovered his true predilection from watching the wild beasts in the , making vigorous studies of them in pencil drawings comparable to those of , then modelling them in sculpture on a large or small scale.

In 1831 he exhibited his "Tiger devouring a Crocodile", and in 1832 had mastered a style of his own in the "Lion and Snake." Thenceforward Barye, though engaged in a perpetual struggle with want, exhibited year after year these studies of animals--admirable groups which reveal him as inspired by a spirit of true romance and a feeling for the beauty of the antique, as in " and the " (1847), " and " (1848), and numerous minor works now very highly valued.

Barye was no less successful in on a small scale, and excelled in representing animals in their most familiar attitudes. Examples of his larger work include the "Lion of the Column of July," of which the plaster model was cast in 1839, various lions and tigers in the gardens of the , and the four groups--"War, Peace, Strength, and Order" (1854).

In 1852 he cast his bronze "Jaguar devouring a Hare." Fame came late in the sculptor's life. He was made Professor of Drawings at the Museum of Natural History in 1854, and was elected to the Academy of Fine Arts in 1868. No new works were produced by Barye after 1869.

The mass of admirable work left by Barye entitles him to be regarded as one of the great animal life artists of the French school, and the refiner of a class of art which has attracted such men as , Peter, Cain, and .