The Book of Heroic Failures

The Book of Heroic Failures 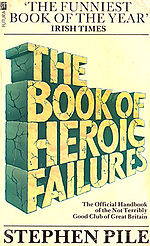 The Book of Heroic Failures, written by Stephen Pile in 1979, is a book written in celebration of human inadequacy in all its forms. Entries include William McGonagall, a notoriously bad poet, and Teruo Nakamura, a soldier of the Imperial Japanese Army who fought for Japan in World War II until 1974.

The original edition included an application to become a member of the Not Terribly Good Club of Great Britain; however, this was taken out in later editions because the club received over 30,000 applications and closed on the grounds that it was "a failure as a failure." The American version of the book was misprinted by the publishers, who left out half the introduction. As a consequence, later versions of the book came out with an erratum slip longer than the entire introduction. In his second book, The Return of Heroic Failures, Stephen Pile reports that Taiwanese pirates were not aware of this and did not include the erratum slip.

His second book came out in Greece in 1992 although his first one had never been published. In fact, his second book was named "Η ΤΕΧΝΗ ΤΗΣ ΑΠΟΤΥΧΙΑΣ No1". A small erratum slip in the book itself explains that it was a mistake. In an interview with English Radio DJ Andrew Marshall, Pile said, "The Book is one of the least successful books ever issued in the USA, I don't think it has reached double figures there as yet and long may that remain the case."

In 1999 Penguin made the decision to re-publish the book as part of their "Penguin Readers" series to encourage reading from a young age, although many critics consider this edition to be a "watered-down" version of the original, lacking its wit and humour.[1][unreliable source?]